Spies in Arabia is a much awaited book on the British in the Middle East during and in the aftermath of the First World War. It avoids focusing on Lawrence alone and gives a fine and comprehensive picture of the cultural background of British agents employed in the Middle East and in Iraq in particular.

Spies in Arabia is a much awaited book on the British in the Middle East during and in the aftermath of the First World War. It avoids focusing on Lawrence alone and gives a fine and comprehensive picture of the cultural background of British agents employed in the Middle East and in Iraq in particular. Satia’s compelling narrative, clearly the outcome of extensive research and penetrating thinking, tells us how the preconceptions of Arabia and its inhabitants became the guiding principles that led the actions of British agents and officials in the Middle East from the beginning of the twentieth century throughout the interwar era.

Satia’s book is a work of British cultural history that intersects several fields – Middle Eastern history, military history, diplomatic history, and history of technology to mention a few – making it a relevant and stimulating work. Satia’s main contribution is to expose the British creation of a “covert empire” after the end of the First World War in the Middle East and particularly in Iraq. She argues that this was a new strategy of colonial control implemented through the work of intelligence, newly created air control, and official conspiracy theories. The covert empire was, according to Satia, a more suitable and sellable concept of Empire to the general public opinion who was left in the dark in relation to foreign politics in the interwar period. Satia, in her work challenges the over-popular picture of Britain in the interwar period as a country where democracy was defended and developed against the emerging enemies of Bolshevik Russia, Fascist Italy, and Nazi Germany. In two parts, as the book is divided, Satia at first discusses the foundations of the idea of covert empire, which according to her were generated in Arabia. In part two, Satia shows how the covert empire founded in Iraq worked, defended itself, and became a paradigm to be exported in other contexts.

This work follows a chronological- thematic approach: chronologically, Satia discusses the period from the pre-war era to the end of the First World War, but remaining within the historical boundaries of the 1930s. Thematically, she jumps back and forth from Britain to Arabia showing how British intelligence exploits in the region have been shaped by a particular definition of Arabia and how the outcome of he work of the agents on the ground was used in the formulation of policy making on a large scale. As the reviewer is a historian of the Middle East, much of the focus of this assessment of Satia’s work will be on British intelligence in the Middle East and air control implemented in the newly created nation-state of Iraq. The book opens with a thorough discussion of the British intelligence community at the beginning of the twentieth century and how their Edwardian imagination shaped the conceptualization of Arabia. Satia convincingly shows how these agents made Arabia and their adventure in the Orient a tool to exploit for launching their literary careers. (p. 61) The Arabia they built was mainly a fiction, an artistic space, which with the outbreak of the war also became a strategic region, a place that according to Satia only these agents were able to understand and interpret. These agents, using Satia’s words, came ‘to think like an Arab’ (p. 100) claiming a knowledge that would give them access to power: their own power that would secure them a position of influence as well as the power of the state itself. These agents not only provided the British with knowledge that would enable them to dominate this space, but according to Satia their activities, modes, and reports normalized the idea of the Middle East as a space for intrigue and above all. As she shows in the second part of the book, the Arabs were portrayed as a race that saw violence as a central element of their culture, which they very much needed and invocated.

To Satia’s credit, the first part of the book really represents an innovative approach to a popular subject: British intelligence in the Middle East that often only revolved around Lawrence and the Arab Revolt. Though Satia’s narrative is fresh and comprehensible, at times the reader may feel overwhelmed by quotes and side- stories that are a little bit redundant and superfluous. What Satia really achieves in this first part is to profoundly analyze the exploits of the British intelligence community and to see how these have been employed in the long term. The exploitation of intelligence gathering in the formation of the covert empire is the focus of the second part of the book. Satia opens this part discussing how the understanding of Arabia turned into conspiracy theories and how contemporaries made sense of those events. (p. 203) Using the tools of a deep cultural analysis, Satia exposes the ways in which British officials and media tried to explain Arab rebellions against the same British rule. Conspiracy theories came to be official theories supported by the same agents, who operated in the region during the war and remained the expert ears and eyes in the Middle East. This environment, according to Satia produced and immanent paranoia, which was partly defied through a new technology of surveillance: air control. This new means of surveillance was not only cheaper and more convenient but as Satia explains, its development also had cultural reasons, as agents on the ground defined Iraq as a suitable place for aerial surveillance. (p. 240) Air control was intended to be driven by intelligence and to provide the basis of an empire’s hold by agents and not military troops. Clearly air bombardment was very much a regime of terror, which proved very difficult to defend vis-à-vis public perception, though Satia shows how paranoia remained a very strong rationale to defend covert colonial power. (p. 277)

“Spies in Arabia” clearly points the finger at the British and exposes how state led terror campaigns were the byproduct of the culture produced in war-time Britain and the Edwardian mentality. Satia’s work, though lacking a discussion on the recipients of British policies, clearly not the focus of Spies in Arabia, persuasively tells us of how Arabia and more precisely Iraq was exploited as a guinea pig in the new business of covert empire building. Though Satia closes the book reminding the readers that history does not repeat itself, she clearly suggests that in light of current events in the region it would be wise to draw some lessons from playing imperialism in Arabia. 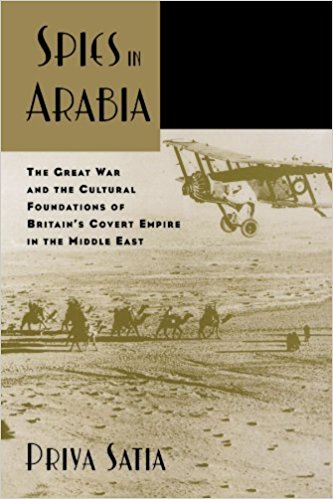