Syria and the Doctrine of Arab Neutralism: from Independence to Dependence

Rami Ginat’s monograph traces the development of Syria’s foreign policy of neutralism during its early years of independence in until the fall of the Soviet Union. By situating the evolution of Syrian politics within a global framework that incorporates the diplomatic positions of emerging nations of the so-called Third World– particularly India, Egypt, Yugoslavia, and Indonesia – Ginat demonstrates the multifaceted face of neutralism that simultaneously united and divided nations seeking an alternative “third path” within the ideological struggle of the Cold War.

Rami Ginat’s monograph traces the development of Syria’s foreign policy of neutralism during its early years of independence in until the fall of the Soviet Union. By situating the evolution of Syrian politics within a global framework that incorporates the diplomatic positions of emerging nations of the so-called Third World– particularly India, Egypt, Yugoslavia, and Indonesia – Ginat demonstrates the multifaceted face of neutralism that simultaneously united and divided nations seeking an alternative “third path” within the ideological struggle of the Cold War.

Reflecting the methodology of a political scientist concerned with the history of ideas, Ginat traces the mutually constitutive relationship among Arabism, elite politics, and the development of national geopolitical positions while stressing the ways in which inter-bloc and inter-Arab politics determined the outcome of these positions. Ginat’s conclusions challenge the pioneering literature of Patrick Seale (1965), Fayez al-Sayegh (1964), and others on two principal points. First, while many contemporary Middle Eastern scholars agree that the ideology of Arab neutralism came into maturity during Nasser’s first years of power in Egypt as a counterbalance to Western and Soviet hegemony, Ginat presents convincing evidence that “the roots of neutralism were already sown in Arab soil in the early 1940s.” (p.xiii) Specifically, contributions from Arab intellectuals – particularly from early Syrian Ba‘ath party leaders – during the French mandatory period had “created the ideological conditions… for the rise of neutralism,” well before the official formulation and implementation of the policy.

While previous interpretations of Arab neutralism stress the inter-Arab national politics that determined how leaders positioned their states within the polarizing context of the Cold War, Ginat shows how inter-bloc politics involving other nonaligned, non-Arab states such as India, Yugoslavia, and China played an equally important role in conditioning a nation’s particular brand of neutralism at a given time. Neutralism evolved in Syria as a reflection of what Ginat calls the “utilitarian considerations” of the nation, especially following the end of World War II when Syrian leaders searched for legitimacy in the international scene and cultivated short-term national partnerships with other emerging nations. In a larger sense, Ginat shows how neutralism developed among non-aligned nations as a reflection of the “local conditions, political heritage and tradition, and special needs,” of each county. (p.xiv) With an eye for the dynamic between ideas and policy, Ginat questions the degree to which neutralist positions were the demonstration of an engrained ideology, or simply the ad hoc result of realpolitik. Based on the narrative he presents, the reader is left to conclude that Syrian foreign policy initially reflected the former, while slipping ever closer to the latter over time.

Chapters one and two trace Syria’s early years of independence as national leaders courted relations with both the United States and the Soviet Union while developing strategies to consolidate power at home. Chapter three explores Syria’s place in the emerging constellation of non-aligned Middle Eastern states and its ideological affinity with neutralist leaders in India and Egypt.

Chapters four and five illustrate the rise of complicated ideological factions within Syria and the slow takeover of Syrian political discourse by an assorted mix of Ba‘athist, communist, and independents leaders. Ginat provides extensive evidence to show that between 1946 and 1961 Syrian foreign policy was “characterized by its constant search for foreign allies,” (p.231) which resulted in a constantly shifting position vis-à-vis neighboring states. Moreover, unlike the majority of contemporary non-aligned states, the struggle for Syria between the two world super-powers was largely overshadowed by the regional struggles between the Soviet Union and Egypt. In this case, Syria became increasingly drawn into the regional power struggle, which culminated with its merger with Egypt in the United Arab Republic in 1958.

The final chapters and conclusion chart the cooling of relations between the USSR and the UAR after 1960, and demonstrate how Nasser’s desire to eradicate internal communism and establish hegemony within the Arab world lead to the demise of the short-lived Republic. With the fall of Nasser and the decline of Soviet influence in Egyptian affairs, Syria became increasingly dependent upon Soviet aid, which transformed Syria into a “virtual Soviet satellite in many international affairs.” (p.230)

Ginat’s goal of situating Syrian political history in a wider context of dialogue among non-aligned nations is a welcome development in the literature. In order to frame this narrative, however, Ginat relies heavily on a complex typology of the various brands of neutralism that typified Syrian foreign policy, which may be both the strongest and weakest aspect of the work. On the one hand, the general political narrative between 1945 and 1962 is meticulously researched and his claims concerning the early emergence of neutralist tendencies are supported by overwhelming evidence (diplomatic communiqués, speeches, and public records) drawn from archives in Britain, the US, Israel, Poland, and India. On the other hand, his discussion of the nuances that distinguished the eleven brands of neutralism at times dominates the text at the expense of important events that do not conform to the author’s model. In a sense, Ginat fails to cleave closely enough to his stated focus on the relationship among ideology, policy and events on the ground. Clearly, ideology is the main focus of this book. Imposing theoretical order that would not necessarily have made sense to the historical actors themselves tends to obscure the historical process and foreclose alternate readings of the period. This relatively minor criticism notwithstanding, Rami Ginat’s work is a considerable addition to the literature on the period and a worthwhile read for any student of Syrian history and Cold War politics in the Middle East. 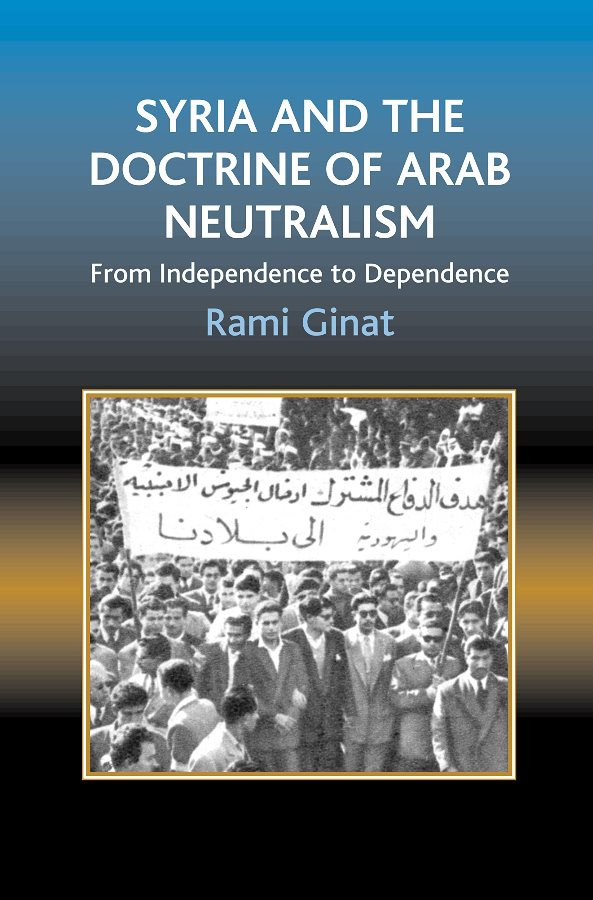