This little memoir, first published in Italian in 1987, is an account of a life well lived. A proud Sephardi Jew, Victor Eskenazi (1906-1987) was fortunate to have been born and raised in Istanbul at a time when that city was still home to an extraordinarily diverse mix of ethnic and religious groups.

This little memoir, first published in Italian in 1987, is an account of a life well lived. A proud Sephardi Jew, Victor Eskenazi (1906-1987) was fortunate to have been born and raised in Istanbul at a time when that city was still home to an extraordinarily diverse mix of ethnic and religious groups.  In the book’s introduction, Eskenazi’s son John defines his father as Ottoman “because of his inbred cosmopolitanism, his wide vision of the world, his insatiable intellectual curiosity, his instinctive understanding and respect of other peoples, cultures, and behaviours, and when required also a determination and assertiveness that is so prevalent in the Ottoman personality and in the history of the Empire” (pp. 10-11).  Although Eskenazi’s formal education ended with high school, just growing up in such a city was in itself a liberal education.  By the time he finished high school, he was fluent and literate in Greek, Ladino, French, Ottoman Turkish, German, and English.  A bright and sensitive child, Victor clearly reveled in the rich variety of sights, sounds, and smells his native city offered him in such profusion.

Although the Eskenazis had lived in Istanbul for generations, they retained British nationality, because the family had originated in Gibraltar.  Culturally, however, they were more German than British, because his father’s brothers had been educated in Germany, and some of his mother’s brothers lived in Vienna.

When Victor’s father died in 1915, Victor and his mother and sister went to live with his father’s brother (married to his mother’s sister), who was a prosperous gynecologist.  They lived in a large flat on the third floor of an apartment building near the elegant Pera Palace Hotel.  It was in that apartment, tastefully decorated with beautiful and interesting objects, that Victor grew up.  During World War I, he attended a German school, where he encountered some discrimination both because of his nationality and his Jewishness.  When the war ended and the English high school was able to reopen, he was happy to transfer there.  It was with particular fondness that Victor recalled the postwar period, when an influx of well educated Allied officers and refugees from the Russian revolution infused the city’s cultural life with a renewed vigor.

After graduating from high school, he immediately took a job in the loans department of an English bank.  In 1926, when his uncle became seriously ill, the family moved to Vienna so that he could be treated at a clinic there.  In Vienna young Victor worked for a while at a small bank belonging to his mother’s brothers, but in 1927 the family decided that he should go to Milan to help his Uncle Victor in an oriental carpet business he had started there.  He promptly fell in love with Italy, and it was there that he found his true calling.  He had long been fascinated by antique carpets, and now he had the opportunity to acquire genuine expertise on the subject.  By 1937 he had become so knowledgeable that the curator of the Evkaf Oriental Carpet Museum (now known as the Museum of Turkish and Islamic Art) invited him to catalog some eight hundred antique carpets that were housed there.  Unfortunately, he was unable to accept, because he had to go back to work in Italy.

In May 1939, Eskenazi moved to England with his wife and his mother.  In London he found a job working for a school friend who was in the business of importing canned goods.  This was probably the low point in his life. Not only was he miserable in his job, but he and his family had to endure the worst of the Blitz in London.  In 1941, he joined the British Intelligence Corps.  During the remainder of the war, he worked, first in Cairo and then in Istanbul, monitoring broadcasts from Germany and from the Balkan countries under Nazi domination.  When the war ended, he returned to Milan, where he spent the remainder of his life as an antiques dealer.  Near the end of his book, he wrote the following eloquent appreciation of his chosen vocation: “An antiquarian must travel and know the world. He must look at what surrounds him and he is perhaps more receptive to outside influence because of his experience and the training he has acquired in his profession.  He comes back from his wanderings with a wealth of lasting images, enriched with new knowledge and with the advantage of having known and established human contact with people who live and think in a different way. His travels are like an open vista on the outside world, but his natural habitat is within his place of work.  He lives in it as in a shell, immersed in the past.  His very nature resents the influx of the surrounding atmosphere.  He is not easily involved in the present.  People who come to see him are influenced by the same serenity that pervades the atmosphere and are often prepared to engage in an unconstrained dialogue” (pp. 173-174).

Ezkenazi had almost no interest in politics.  Although he lived in Turkey throughout the War of Independence, he never mentions it or Atatürk.  Likewise, one will find here no references to the rise of Fascism, which he experienced in Italy.  However, others have written authoritative accounts of those matters.  The great virtue of this book is its humane evocation of life in the pluralistic, tolerant, cosmopolitan Ottoman Istanbul of a century ago. 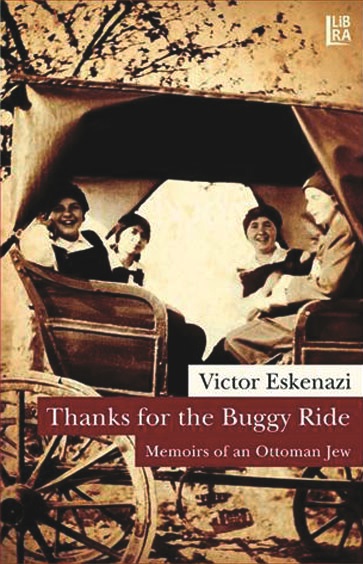