The Armenian Rebellion at Van

Devoid of rhetorical embellishment, this work challenges some traditional notions about the tragic history of both the Muslim and Armenian people of the Ottoman eastern Anatolian province of Van. It is a balanced contribution to a field of study that in the past has often been affected by nationalist agendas and emotionally charged discourses.

Devoid of rhetorical embellishment, this work challenges some traditional notions about the tragic history of both the Muslim and Armenian people of the Ottoman eastern Anatolian province of Van. It is a balanced contribution to a field of study that in the past has often been affected by nationalist agendas and emotionally charged discourses.

After detailed and sometimes boring information on the geography, climate, inhabitants, agriculture, education, industry and commerce in the city and province of Van, the moving parts of the book begin with the third chapter, where the political and sociological contextualization is provided. Here it is argued that the misfortunes of raided villages were not purely Armenian troubles. Tribes and bandits of the province did not discriminate among targets by religion and the suffering was not sectarian. Furthermore, the Ottoman government and the Armenians were not natural antagonists, because it was in the interest of the Ottomans to safeguard them, as well as the settled Muslims, if only to continue collecting their taxes. In contrast, the Kurdish tribes and the government were natural antagonists, considering tribal-state relationships per se. Contrary to an often portrayed two sided conflict, we see a complex picture, where the sides change depending of the interpreter, the conflict becoming Turkish-Armenian, Turkish-Kurdish, Kurdish-Armenian, Ottoman-Russian or Christian-Muslim. But, while expressing the often confused and contradictory nature of Ottoman policy, the authors remain careful not to downplay the cases of extreme brutality and destruction that the Turkish military and Kurdish tribes imposed on the Armenians.

Exploring the acts of Armenian revolutionaries in the three main rebellions of 1896, 1908 and 1915, the book portraits horrible examples of rebellious terror. And still, Ottomans were decidedly lenient in punishing political dissent. Comparing European tactics of fighting rebels in colonies, like those used by the British in India or the French in North Africa, the authors present the double standard of European powers when it comes to judging Ottoman counteractions to terror. They did not allow the Ottomans the tools that they themselves used to put down revolt, although Europeans were imposing colonial rule on majorities, whereas the Ottomans were attempting to protect the majority against a distinct minority, the Armenian rebels. So, the handicap of the Ottoman state in effectively fighting the rebels was not only scarcity of money. Stating that disunity hampered effective governance, the authors point to another factor, the centuries-old Ottoman policy of dividing power in the provinces between the military and the civilian authorities, whose conflicts caused the government to speak with many voices.

Another quarrel tying the hands of officials was Russian support. Russians rendered great assistance to the rebels by applying rules of extraterritoriality in their favor. Revolutionaries who were Russian subjects were not punished because of the en force accepted principle that subjects of European states could not be tried in Ottoman courts. With the outbreak of World War I, the Russian factor in Armenian rebellious activity became more obvious. In fact, Dashnaktsutiun, the strongest among Armenian revolutionary parties in Anatolia, was officially founded in 1890 in Russian Transcaucasia. Openly welcoming the prospect of a Russian occupation of the Eastern Anatolia, thousands of Ottoman Armenians went to Russian territory to be trained in partisan tactics and integrated into the Russian imperial forces as members of the Armenian Legions, the druzhiny units. The rebels realized very late that they had been betrayed when, after the final Russian conquest of Van in September 1915, the Russians began to disarm Armenians, dissolve the druzhiny, etc. The Russians had no intention of creating an Armenia in Anatolia at all, but planed to settle Russian and Cossack colonists there and therefore concurred in the Sykes-Picot Agreement, which gave Van to Russia, not to an Armenia.

The authors provide intricate and detailed discussions of the hostility and cruelty caused by Armenian nationalists relying on Russian support. By arguing that the Ottoman regime never formulated a plan to annihilate its Armenian subjects, the authors disagree with most previous Armenian scholarship on the matter. A form of non-partial evidence, especially the reports of British consuls in Van, is used en masse to describe rebellious activities, instead of the usual Turkish state accounts.

This can be counted as a shortcoming of the book. Ottoman documents of the Prime ministerial Archives (BOA) were purely internal reports and had no foreseeable political or diplomatic benefit, and therefore, are more reliable sources in contrast to consular reports etc. Beside the ATASE (Military) Archives, which are not easily open to public and therefore cannot be examined, the authors used BOA documents only in Chapter 5 in narrating the short governorship of ‘Ali Riza Pasha’ in ten pages, but they got it wrong. The governor to be killed by Armenian revolutionaries in Batum in November 1907 was not Ali Riza Pasha, but Adliyeci Âli Bey. And the former was also not even a Pasha, but Ali Riza “Bey”. The book is -as almost all secondary accounts areconfused about these two names who followed each other in governorship of Van. But one has to carefully dig up when writing ten pages about a governor, otherwise these pages can become garbage. The only other use of BOA documents is to be seen at Chapter 7, to explain the assassination of the Armenian Mayor of Van in two pages.

The most important data needed when writing on the Armenian issue is to be found in the Dahiliye section of BOA, which was not even touched by the authors of this book. To show the relevance and give just one example, I would like to mention the telegram sent by Tahsin, the governor of Van, to Talat, the Minister of the Interior, on August 25, 1914. Answering an inquiry of Talat, the governor mentions that no Armenian crossed the border to Russia or Iran, and the Armenians of Van do not have feelings of dispute or rebellion against the government. Moreover, he writes that the Dashnaks will help the government in the war (“Seferberlikten evvel ve sonra Van vilayeti Ermeni ailelerinden Rusya’ya İran’a hicret ve firar etmiş kimse yoktur. Bura Ermenilerinde hükumete karşu öyle bir fikr-i ihtilal ve ihtilaf da yoktur. Bilakis Daşnaklarda seferberlik ve tekâlif-i harbiye münasebetiyle hükumete muzâheret ve muavenet görülüyor.” BOA, DH.EUM. 2.Şb. 1/31, 1332 L 3) This and many other documents of BOA had to be used in a book arguing that thousands of Ottoman Armenians went to Russian territory to be trained in partisan tactics and integrated into the Russian imperial forces as members of the Armenian Legions, the druzhiny units.

Beside these shortcomings, The Armenian Rebellion at Van constitutes a welcome contribution to scholarship on the late phase of the Ottoman state and her policy toward Armenians. The authors should be especially commended for attempting to clear this scholarly discourse from many of the emotional and political overtones that have characterized it in the past. The authors present a documented account that displays both historical accuracy and compassion regarding the tragic history of both the Christian and Muslim populations of Van.

In addition to highlighting the unfortunate fate of the inhabitants of the province, this work is also a further contribution towards a richer understanding of the complex nature of revolutions, especially the lost ones. In light of the massive historiography on WWI, it is quite an achievement in itself to document a largely forgotten episode of this huge conflict. 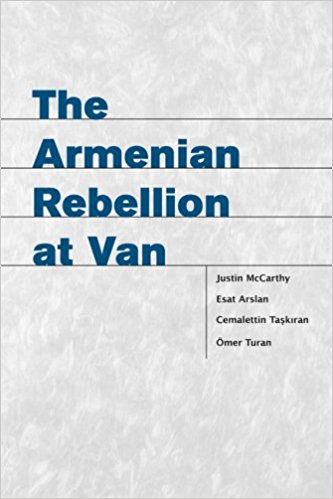