Sean McMeekin’s book is a critical reading of the history of German involvement in the Middle East during World War I. It is specifically a political history of an internationally significant enterprise, namely the Berlin–Baghdad railway project. The book presents a chronological account of events, following a thematic course and mainly episodic in character. Methodologically, states, rulers and certain individuals are taken as prime agents in the narrative.

Sean McMeekin’s book is a critical reading of the history of German involvement in the Middle East during World War I. It is specifically a political history of an internationally significant enterprise, namely the Berlin–Baghdad railway project. The book presents a chronological account of events, following a thematic course and mainly episodic in character. Methodologically, states, rulers and certain individuals are taken as prime agents in the narrative. Throughout the book, McMeekin underlines the strategic importance and potential power of jihad (Islamic holy war) not as a peripheral, as many scholars would argue, but as a central element of German war strategy. McMeekin argues that the German government wanted to utilize jihad as a weapon against Britain and Russia, as these governments ruled over Muslim populations in their imperial territories that outnumbered the Muslim population living in the Ottoman Empire, the largest Muslim Empire at the time.

The book covers a wide range of topics from the construction of the Berlin-Baghdad railway to the preparations for WWI, from the proceedings and experience of the war in the Middle East to Zionism and the Palestinian issue, and from anti-Semitism in Germany to 9/11 in the U.S. McMeekin initially narrates the history of the railway project, then the story disappears as WWI starts. Subsequently, the author focuses on the question of “Jihadism,” which is a recently generated concept used mostly in current political debates and political science to explain the motivation behind certain globally operating militants. From the epilogue on, the author emphasizes that the call for jihad as a German war strategy was an overestimation or a myth in almost every chapter. It was a failure in political and strategic terms but achieved one thing that is sowing the seeds of current “global jihadism.” McMeekin looks back on the competing German-Ottoman and British-Wahhabi alliances in a retrospective manner. As a result, he concludes that what we know as Jihadism today is the ultimate product of this competition from WWI. The last sentence of the book clearly indicates the presentism that dominates his argument: “it was a breathtaking error in judgment, and we are all living with the consequences
today” (p. 366).

A great merit of this book is the abundant use of archival material. The rich list of abbreviations indicates that Russian, French, German, American, Austrian, British and Ottoman archival sources are utilized. In addition, the author weaves this material together nicely and composes an articulate, colorful and readable – though sometimes too informal and sarcastic – story. The book presents a kind of narration that many historians either overlook or can barely achieve. Moreover, he skillfully incorporates biographic information into the main text. Indeed, it is a painstaking work but not necessarily meticulous. Government documents without critical reading might explain less than what they tell. This academic-ethical concern aside, McMeekin feels no need to distance himself from the colonial language of the documents. For example, he describes how Boutros Ghali, the Coptic Christian Minister-President of Egypt who was appointed by the British colonial rule, was assassinated “by a young Muslim fanatic” (p. 27). Likewise, McMeekin does not hesitate to label the local forces fighting against the British imperial army in Egypt as “jihad-terror comitajis” (p. 92).

This brings us to the question of the author’s uncritical perspective. McMeekin not only reads the primary sources as “fact books” but also writes as if he was a part of the events. The book looks like a personal account of a scholar who was engaged and entangled in the events politically and sentimentally. He openly expresses his biased feelings about the Ottoman and German rulers of the time. For instance, he refers to Abdulhamid II as “tyrant” and “Bloody Sultan” many times and criticizes Max von Oppenheim and his “foolish” emperor Kaiser Wilhelm II for promoting jihad. Furthermore, it is easy to notice the author’s sympathy toward the British and the pro-British members of the Committee of Union and Progress (CUP). An approach like this poses a serious question about the academic reliability of the book.

As mentioned above, The Berlin-Baghdad Express is mainly about Germany’s war effort in the East, written from an Anglo-American or general Western perspective. Why is the Ottoman approach missing in this book? Well, there is a section reserved for the Ottoman archives in the “list of abbreviations” but the book is really poor on that matter. In the whole book, there are only five references to the Ottoman archival documents, only four references to secondary literature on Ottoman history written in Turkish, and no reference to Ottoman-Turkish newspapers at all. The reader would expect more from a scholar who lived and taught in Turkey for more than a decade.

In his review of The Berlin-Baghdad Express, Robert Zens draws attention to McMeekin’s neglect of the rich scholarship on the period of Abdulhamid II, such as Kemal Karpat’s The Politicization of Islam (2001), Selim Deringil’s The Well-Protected Domains (1999), and Francois Georgeon’s Abdulhamid II (2003).1 To the list of neglected books, one should add İlber Ortaylı’s Osmanlı İmparatorluğu’nda Alman Nüfuzu [German Influence in the Ottoman Empire], a well-known book written specifically on this subject. Unsatisfactory use of secondary literature is not only a scholarly shortcoming, but also leads McMeekin to some factual mistakes. For example, he writes, “There was Persia and southern Mesopotamia, where Shia Muslims had never accepted the Ottoman Sultan as their Caliph” (p. 14). Contrarily, as Meir Litvak shows in his article published in 2000, many leading Iraqi Shiite mujtahids followed the Ottoman Sultan’s call for jihad and fought against the British army during WWI.2

Essentialism and anachronism, embedded in the author’s sarcastic and informal writing style, are two other major shortcomings of the book. There are problematic remarks such as the Baghdad railway “born in sin” (p. 43), “Hamidian Islamists” (p. 75), “German Jihadists” (p. 89), “brunt of the Muslim rage” (p. 125), “Islam has always been a fighting creed” (p. 234), Germany ridding “the tiger of Islamic rage and resentment” (p. 258), “the murderous rage of Muslims” (p. 365), “unleashing the murderous rage of Muslims” (p. 365) and others. The book occasionally gives the impression that the author sometimes goes too far as to transgress the tolerable limits of scholarship. So, it is not surprising to come across orientalist stereotypes such as “the iron law of the Orient” (p. 21); or “In the Orient, what one said mattered less than how one said it” (p. 207). McMeekin describes the Caliphate as a “troublesome Islamic institution.” While talking about Mustafa Kemal’s choices and asking why he did not declare himself a caliph, he said, “Instead he chose to kill off this troublesome Islamic institution which had brought his country nothing but devastation in the modern era” (p. 338). The author uses concepts such as “Islamic jihadism” for the early 20th century without consideration. Therefore, sentences such as “Berlin … had been cynically turned into the world capital of Islamic jihadism and inevitably corollary, anti-Semitism” is not an exception (p. 339).

An interesting approach by McMeekin is that he introduces Britain and Germany as essentially “Christian” powers. He emphasizes several times the “christianness” of European states and talks about “Christian Europe” (p. 71), “Christian West” (p. 71), “Christian Bulgaria” (p. 80), and “Balkan Christian armies” (p. 80) without ever discussing the extent to which the local and international policies of these states can be considered “Christian.” One can call this approach historical baptizing and it certainly drives the author to bizarre conclusions. For example, McMeekin naively astonishes how his “Christian” powers built such alignments that Germany cooperated with the Ottoman Empire (a Muslim state), whereas Britain fought against it. However, he seems less surprised when the emirs of Arab “Muslim” tribes in Hejaz established close relationships with Western “Christian” powers.

In sum, readers ready to tolerate anachronistic connections between past and present for the sake of “some” explanation of today’s political concerns might welcome this book as a novel contribution, but many scholars will certainly raise lots of questions about its perspective, method, sources, and content. The book begins with a reference to John Buchan, who comments that “someday, when the full history is written – sober history with ample documents – the poor romancer will give up business and fall to reading Miss Austen in a hermitage” (p. vii). Overall, this reference to Buchan seems to be the greatest irony of McMeekin’s The Berlin-Baghdad Express. 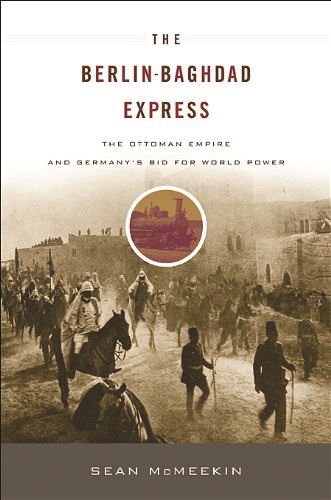