The Circassian Diaspora in Turkey: A Political History

This book is the long-expected first book on the politics and history of the Circassian diaspora in Turkey in English that covers an ambitious time frame, ranging from the last period of the Ottoman Empire to 2011. Besleney not only brought in the advantages of having an insider understanding of culture, he also did field work in various countries, where the Circassian diaspora communities are located, i.e. Turkey, the U.S., Germany, Belgium, the Netherlands, Adyghea, and Abkhazia. Therefore, this work is a unique contribution to diaspora studies and Circassian studies, as well as Turkish and post-Soviet studies. In this “political history,” Besleney largely provides a history of ethnic organizations founded by the Circassians in Turkey, and their relations with the hostland and homeland organizations.

This book is the long-expected first book on the politics and history of the Circassian diaspora in Turkey in English that covers an ambitious time frame, ranging from the last period of the Ottoman Empire to 2011. Besleney not only brought in the advantages of having an insider understanding of culture, he also did field work in various countries, where the Circassian diaspora communities are located, i.e. Turkey, the U.S., Germany, Belgium, the Netherlands, Adyghea, and Abkhazia. Therefore, this work is a unique contribution to diaspora studies and Circassian studies, as well as Turkish and post-Soviet studies. In this “political history,” Besleney largely provides a history of ethnic organizations founded by the Circassians in Turkey, and their relations with the hostland and homeland organizations.

In the first chapter, Besleney discusses various theories in the literature on ethnicity and nationalism, the diaspora studies and various issues related globalization and transnationalism literature. He thinks that the failure of the “Soviet project to create a separate Adighe, Kabardian and Cherkess identity,” “ethnic solidarity of the Circassians in the 14th and 15th century Mamluk Empire,” and “survival of Circassian ethnic identity in various Circassian diasporas since the 1860s, despite subjection to the nationalizing policies of the states in which they found themselves” demonstrate that the ethno-symbolist theory of nation explains the Circassian case better (p. 11). Besleney rightly argues that “a single formula” is not “capable of explaining emergence, creation and/or survival of all nations or nationlike entities.” It would be then appropriate for him to consider whether constructivism would explain certain periods of Circassian ethno-national history better, especially since his work focuses on elite organizations and how they continuously re-negotiate the Circassian identity (whether it includes Abkhaz, Abazin, Ubukh, Ossetians, and even other North Caucasians in addition to Adyge) and re-define what is central to being a Circassian. It seems that ethno-symbolist framework also prevented the problematization of the fit between the Circassian identity/identities in Turkey and the Circassian identity/identities in the former Soviet Union/Russia, and other diaspora settings, which is a main issue for many diasporas. A topic such as diaspora could benefit a lot from a constructivist approach, as it is about an ethnic identity that is hard to standardize and that is contested even more than other territorial nations.

Next, the author argues that Circassians fulfill most criteria for being a diaspora provided by Safran, and would fit in “victim diaspora” in the typology of Cohen. He also argues that Circassians at the same time demonstrate the possibility of enriched existence in the hostland and embrace the possibility of belonging to both the diaspora setting and the homeland, a point made by Tölölyan with regards to the transformation of diasporas in the global age. Again, these ethno-symbolist theories of diaspora are mainly about the identity of diasporic masses, and say little about the role of elites and organizations but this book focuses mainly on the latter. Finally the author emphasizes the significance of interconnectedness, and advancements in technology, especially the internet in rejuvenating and reshaping the diaspora identity. At the same time, these global transformations have also created new challenges such as a clash of interests between diasporas and the hostlands, as evidenced by Circassian support of Abkhazians, despite the official Turkish foreign policy that supported Georgia.

In the second chapter, the author introduces Circassia and Circassians, followed by a chapter on the pre-exile history. In the fourth chapter, he examines the formation of the Circassian diaspora in Turkey. Late Ottoman and pre-1950 history of Turkey unfortunately is not well researched or understood because of a lack of data, insufficient interest and dominance of non-objective, ideological approaches (especially in the Turkish academia), making it harder for the author to place Circassians in the history of pre-1950s Ottoman Empire-Turkey. In addition, there is not much data or many sources to understand how Circassian communities, minorities or even “Turkish” society felt or why they acted in the way they did in this period. The author explains how Circassians, as several other minorities suffered in this chaotic period of war and transition to Turkey, and later were unjustly punished by deportations of certain villages (which was reversed) and suppression of their ethnic difference.

While it is true that Circassians were unjustly labeled in the Turkish ideological historiography as traitors because of the conflicts of some Circassian leaders and communities with Mustafa Kemal’s movement, the author too focuses on points of conflict between Circassians and Mustafa Kemal’s leadership and de-emphasizes how much other Circassians cooperated with Mustafa Kemal, and in fact how much they led the “Turkish” resistance movement against occupiers. It is interesting that the author points out the similarities of Circassians with Alevis, or Kurds, but nobody would deny that Circassian integration and inclusion into Turkish society far surpasses these groups, being comparable to Crimean Tatars and Balkan immigrants. In short, more historical evidence is needed to make a conclusive judgment about ordinary Circassians in this era. The level of national consciousness among Circassians before the 1950s is not yet known for certain, and it is not clear either whether people acted on the basis of being Circassian or other identities.

What is known, though, is that being oppressed in Turkey did not stop the Circassian elite nationalists from conducting diasporic activity. They simply shifted their center of activity to Europe in this period, and worked for the demise of the Soviet Union, in collaboration with other émigré nationalities of the Soviet Union and European governments. Although interwar activity is covered in the later chapter under the United Caucasianist movement, it deserves to be explored as a movement of pre-1950s Circassian diaspora history. Confining a diaspora’s history to a particular hostland is limiting because diaspora by definition is a transnational phenomenon.

Chapters 5 and 6 are the chapters in which the author makes an original contribution to the literature. The diaspora organizations and their transnational relations in the second half of the 20th century, and the 21st century are analyzed in detail. A question comes to mind about resonance of these ethnic organizations, for, if the resonance of some of these organizations is quite low, then this would affect their representation capacity, their historical significance and the limits of diaspora identification among those of Circassian origin. As explained in chapter 6, the Circassian diaspora politics became more transnational, internet-based, informally organized, grass-roots, issue-based, and participatory in the 2000s. While the author rightly celebrates the innovations brought by these new forms of movement, at the same time, as I observed in the case of the Crimean Tatars who underwent the similar transformation, this new situation brings new challenges such as the durability and continuity of national traditions. Effectiveness of these new forms of diaspora movement requires further discussion. The author argues that a “few hundred Circassian activists in the U.S. can mount cyber-campaigns which prompt the Russian state to react and make policy changes” (p. 17) but the causal links, and significance of what is achieved requires further explanation.

This book is an invaluable contribution to Circassian studies and is an essential book for an introduction to Circassian history. Similar works on sociological and historical dimensions on Circassians in Turkey and in the world, a global history of Circassian nationalism (à la Panossian) and other Circassian diaspora communities are still much needed. Circassian genocide recognition movement is a new phenomenon that needs to be added in further revisions of this book. 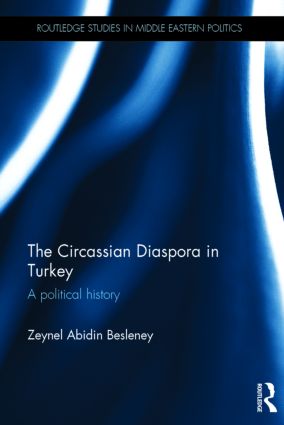