Sasson Sofer presents a sophisticated intellectual history of the institution of diplomacy and its vital importance for the ordering and preservation of the international society of states. In attempting to explain the enduring relevance of diplomacy, Sofer alerts the reader to three “constitutive principles” (p. i). These principles include the centrality of practice in shaping diplomatic culture, diplomacy’s tendency toward stability, and the idea that diplomatic competence is indispensable in a world of independent states. The themes are explored in eight chapters that concern the history (chapter 1), scholarly and intellectual reflections (chapter 2), customs (chapter 3), locus of activities (chapter 4), tools (chapter 5), and habitus (chapter 6) of diplomacy. chapters 7 and 8 respectively provide a discussion and conclusion, postulating that notions about the decline of diplomacy do not obtain in contemporary international politics. Since practice precedes the institution, diplomacy is highly adaptive to new technologies and practices. Diplomats remain useful as symbols of peace and reconciliation among the most important political actors: states. Finally, diplomacy remains the best way to conduct relations within a culturally and politically diverse global society.

Theorizing on diplomacy can be attributed to the “practice turn” in philosophy and social science more generally, which seek to unearth how a diversity of actors transform their social environments through their interactions inter se; the rising interest in diplomatic studies in the International Relations discipline can be attributed to this trend as well. The gravamen against diplomatic theorists in International Relations concerns their lack of sufficient archival material. In Courtiers of Civilization, much of the discussions are supported with a cornucopia of secondary sources and theoretical treatments, but there are virtually no primary sources, save for a few excerpts from the memoirs and treatises of diplomats, as well as some accounts already available through the press. The interpretivist stance of this project is understandable as it seeks to divine the existence of a specialized realm of diplomatic practice and rituals, and argue for its efficacy in promoting international peace, but proponents of methodologically rigorous studies or depth of primary sources may be disappointed.

The brevity of Courtiers of Civilization should not detract from the profundity of its ideas. The book advances a deep theoretical argument that builds upon the themes of the English School approach to International Relations. By stating that, “between solidarist perfection and realistic anarchy, the diplomat’s natural inclination is toward the pluralist idea of international society,” (p. 68), Sofer positions himself in an ongoing theoretical discussion between Realism and the English School, and within the English School itself. Realists conceive the international system as a competitive realm in which states jealously guard their interests. In contrast, English School scholars argue that states are sociable, and that through their interactions, the development of practices, and mutual recognition of their common interests, they form an international society to deliver a modicum of order. Solidarists are scholars who argue for a broader and more inclusive interpretation of international politics in which non-state actors and individuals are vital components of world order. Moreover, solidarists claim that universal normative principles should guide states to pursue humanitarian ends. In practice, the professional diplomat is often in a precarious situation because loyalty to one’s political master may lead to a clash with the diplomatic corps and the broader interests of international society.

In contrast, the author argues that the professional diplomat is an agent of an ethical-pluralist understanding of international society. In this formulation, states and their diplomats are responsible for navigating a culturally diverse international community. States are animated not solely by universal moral principles, but by the normative notion that their interests can only be served by preserving the international practices that benefit them all –complementing raison d’état with raison de systéme (p. 65). In such a rendering, the discussion of whether diplomats remain useful, or should yield to the ‘new diplomacy’ carried out by non-state and transnational actors, is one that is indelibly linked to the perceived decline of states in international politics due to globalization. The book’s strength therefore lies in reinforcing a research program that advocates the centrality of diplomatic practice as being a tendency and requisite of a society of states, without which a globalized and cosmopolitan world could not operate. However, this ambitious, theory-driven agenda is also the book’s main weakness because some concepts, such as the English School approach to International Relations, remain underdeveloped and relegated to endnotes. This may prevent non-specialists from fully appreciating the implications of one of the book’s main constitutive propositions (p. ix).

The Courtiers of Civilization should be praised for making the millennia-long development of diplomatic art and practices accessible to a broader audience. Diplomacy, Sofer concludes, is not an a priori design, but a coping mechanism that emerges “in politically fragmented contexts” (p. 1) where some political autonomy and common norms exist. In this respect, Sofer does an excellent job in illustrating how diplomatic practices emerge within specific civilizational contexts and with respect to power politics. One can find good illustrations of the confluence of power and norms in ancient Roman diplomacy towards barbarians and the development of ius gentium, the unique practices of the Chinese suzerain system such as kowtowing, and the Ottoman practice of humiliating foreign envoys. Yet, Sofer misses an opportunity to show how normative commonalities emerged through interactions between different civilizations to form the practices of our current international society. For example, Sofer finds the basis for continental European diplomacy in the dissemination of a rudimentary diplomatic system in Italian city-states during the Renaissance. This view fails to appreciate that modern diplomatic practices developed not only within European international society, but through its interactions with outsiders. For example, recent discussions in the English School approach have noted the critical role of encounters between European powers and the Sublime Porte in the development of diplomatic immunities as well as the development of permanent embassies to solicit the cooperation of sultans such as those established in Constantinople by Venetian bailos, and ambassadors from France and England over the course of the 15-16th centuries. A final, but minor, criticism that should not diminish the value of Sofer’s contribution pertains to minor editing issues. Most notably, Sofer cites Hedley Bull, a major International Relations scholar of the English School, but often incorrectly spells his name as “Headley.”

While Sofer’s truncated discussion leaves readers yearning for more, Courtiers of Civilization ultimately succeeds in its mission to elevate the tarnished image of classical diplomacy and provide implicit theoretical underpinnings for its resilience. Globalization will not only continue to test the robustness of international cooperation, but will also exacerbate the conflict between the beleaguered officials responsible for its maintenance and the politicians they serve. Sofer’s contribution is a timely reminder that the much-reviled professional diplomat continues to serve as the adhesive holding together an otherwise culturally and politically disparate international community. 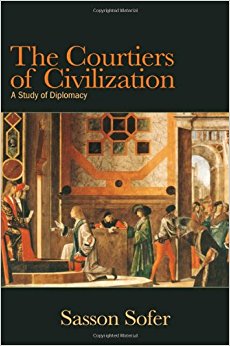