The Cyprus Issue: The Four Freedoms in a Member State under Siege

Nikos Skoutaris has written a timely book on the European Union’s (EU) handling of the legal issues, pertaining in particular to the freedom of movement, in the divided Cyprus after the ‘Republic of Cyprus’ (according to Turkey, ‘the Greek Cypriot Administration’) became a member of the EU in 2004.

Nikos Skoutaris has written a timely book on the European Union’s (EU) handling of the legal issues, pertaining in particular to the freedom of movement, in the divided Cyprus after the ‘Republic of Cyprus’ (according to Turkey, ‘the Greek Cypriot Administration’) became a member of the EU in 2004.

The book at hand deals with a potentially very boring subject on account of the technical nature of the issues, which it covers. Besides, the complexity and the intractability of the ‘Cyprus problem’ call for a multidisciplinary approach in order to make sense of the legal dimensions of the Cyprus dispute. This book successfully takes up this challenge, as the multitude of issues is competently analysed and tied together with the aim of tracing the ‘law in action’ in the context of the partial implementation of the EU acquis communautaire in the north of Cyprus. In fairness, one has to add that the author succeeds in turning this ‘difficult’ subject into a readable ‘text’ by virtue of the breadth of issues covered in the book, the inter-disciplinary method of investigation, and competent legal analyses that permeates the whole work. This is, then, a detailed analysis of a “major” problem over a “minor” piece of territory.

Following an Introducton, Chapter II of The Cyprus Issue addresses the Cyprus issue by beginning with an inquiry into the history of Cyprus from its independence in 1960, through the Turkish military intervention in 1974, to the accession of Cyprus to the EU in 2004. The author manages to provide a reasonably balanced historical and political background to the Cyprus enigma. Chapter III looks into the subject of EU citizenship and the accompanying rights such as human rights, right to property, and freedom of movement. The author draws the readers’ attention to the restrictive implementation of these rights in Northern Cyprus. He also compares and contrasts the degree of compatibility between four freedoms in the EU (i.e. freedom of movement for goods, services, capital and persons) and the derogations, which a permanent agreement (possibly based on a modified Annan Plan) for the unification of Cyprus is likely to contain. Chapter IV examines the specific issue of the free movement of goods in Cyprus. The author points out the economic isolation of the political entity in Northern Cyprus by reference, inter alia, to a number of landmark rulings by the European Court of Justice. The author notes that, in the absence of a comprehensive settlement between Greek and Turkish Cypriots, inhabitants of the northern section of Cyprus can only partially penetrate into the markets of the EU member states. Chapter V, preceding the Conclusion, seeks to find out whether the EU can replace the United Nations as the actor that can successfully mediate between the Turkish and Greek Cypriots for a lasting settlement in Cyprus.

One of the main assertions made in The Cyprus Issue is that although the existing legal situation in Cyprus seems reasonably stable, the “Cyprus Gordian knot,” as Skoutaris calls it, can only be untied through a comprehensive peaceful settlement between the Greek and Turkish communities in Cyprus. The author relates the solid rejection of the Annan Plan by the Greek Cypriots to their disappointment about the Plan’s failure to bring to an end Turkey’s troop presence in Northern Cyprus at an early stage and to provide a satisfactory solution to the issue of the lost properties of the internally displaced Greek Cypriots. (p. 44)

It is difficult to disagree with Skoutaris when he raises doubts about greater EU involvement in the Cyprus problem. This is because, first, the ‘Republic of Cyprus’ and Greece are members of the EU, which means that the EU cannot possibly act as an ‘impartial mediator.’ Secondly, in the words of Skoutaris, “there are possible tensions between the Union legal order and the principles upon which the two communities have agreed that any future settlement should be used.” (p.162) Thirdly, the EU’s Common Foreign and Security Policy (CFSP) does not necessarily endow the Union with the competence to act as the principal mediator in Cyprus. Such an initiative on the part of the Union, would, in the words of Skoutaris, be an “ultra vires act since a CFSP device cannot be used for an area that is part of the Union.” (p.171) Therefore, the EU should not attempt to replace the UN as the principal mediator in the Cyprus problem.

It is known that Cyprus has been a divided country since the Turkish military intervention in Cyprus in 1974, if not even earlier, which brought nearly forty per cent of the Cypriot territory under the Turkish control. This suggests that the internationally recognized state of the ‘Republic of Cyprus,’ founded in 1960, has not been able to exercise internal sovereignty in the northern side of Cyprus. When the ‘Republic of Cyprus’ joined the European Union as a member state in 2004, the Accession Treaty recognized that the EU acquis would partially apply in Cyprus. The author remarks that, after accession, the Republic of Cyprus has tried its utmost to undermine the smoothening of economic relations between the Turkish Republic of Northern Cyprus (TRNC) and the EU. He observes that, should the TRNC establish direct trade ties with the EU, this “may lead to the ‘normalisation’ of EU relations with the authorities in northern Cyprus or the ‘Taiwanisation’ of the regime in the North.” The author sees this as a threatening prospect for the ‘Republic of Cyprus’: “such a framework may upgrade the status of the Turkish Cypriot entity to such an extent that the quest for a comprehensive settlement of the Cyprus issue will become a chimera.” (p.91)

While Skoutaris apparently supports a political solution that will untie the ‘Gordion Knot’ in Cyprus, he endeavours to find legal pretexts against allowing TRNC to trade directly with the EU member states. One could equally argue, however, that, contrary to his exaggerated worries, direct trade could bring about a more positive climate and goodwill towards Greek Cypriots among the inhabitants of Northern Cyprus. A feeling of economic deprivation is likely to undermine the willingness of Turkish Cypriots to support a union with Greek Cypriots. Indeed the failure of the EU to deliver its promises of economic aid and the ending the economic isolation (in spite of the Green Line Regulation, which the European Council of Ministers adopted in 2004, allowing greater freedom of movement in the north of Cyprus) should the Turkish Cypriots endorse the Annan Plan, has undercut the latter’s appetite for a peaceful settlement in Cyprus.

Finally, Skoutaris reckons, I think rightly, that an eventual settlement of the Cyprus problem based on a bi-communal and bizonal federation is not going to see the full implementation of freedom of movement and property rights in Cyprus, because of “the legitimate concerns of the two communities.” (p.119) These concerns are based on the delicate issues, in particular, of the composition of inhabitants and land ownership in each of the federated states. For the author, the strong possibility of derogations which suggest a partial implementation of EU law in the two parts of Cyprus even after unification should not be seen as a unique case. There have been similar arrangements in the history of the EU when, for instance, small member states like Malta and Finland secured derogations to property rights and free movement of persons and capital.

Overall, Skoutaris’ book fills an important gap in the literature by mapping out the implementation of the European Union law in Cyprus with particular reference to the four freedoms. It is also a valuable contribution to our understanding of the interaction between the Union legal order and the Cyprus dispute. This book also highlights the inherent legal constraints which the EU’s Common Foreign and Security Policy encounters in delicate situations marked by a fragmented sovereignty and deep social and political divisions in a member state (Cyprus). This, then, is a valuable study that enhances our understanding of the Union law ‘in action’. 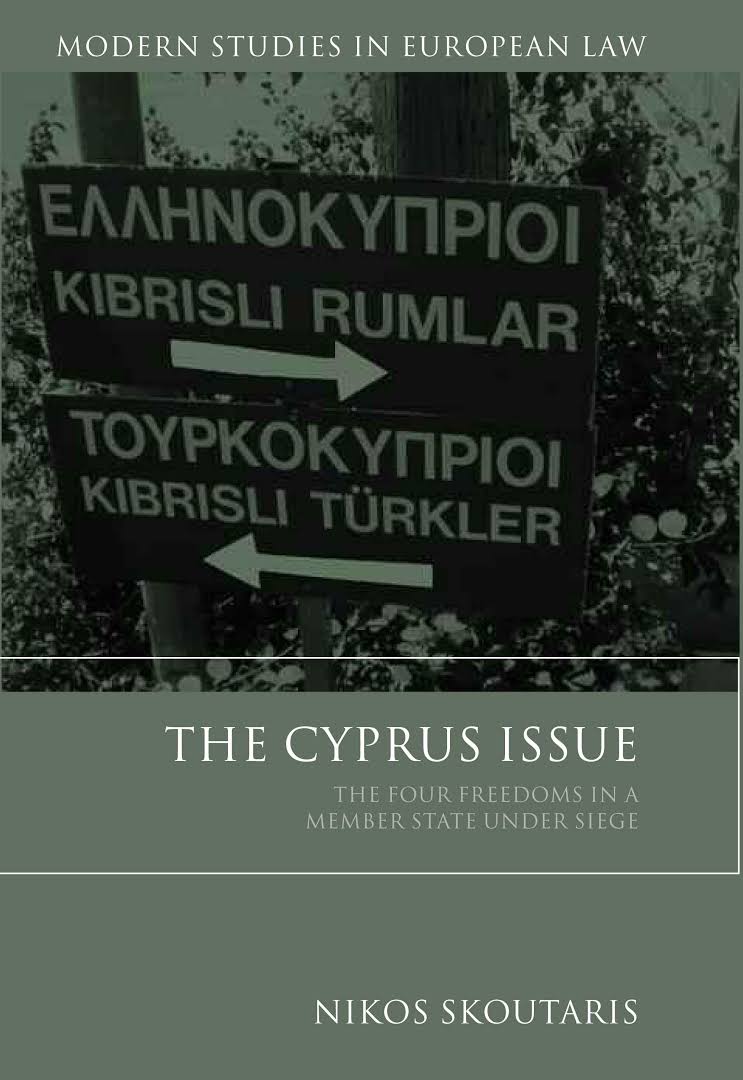