The book enables the reader to compare the practice of an ideology in six countries. For each country, a meaningful discourse analysis for the diplomatic practices has been conducted to convince the political scientists and experts of international relations how the tension between ideology and its implementation took place in the first decades of the twenty-first century. This content enables us to grasp significant aspects of the difficulty of harmonizing a sacred and religious understanding into the more mundane, practical, and multi-sided realm, i.e., international relations.

This book provides a comprehensive study of how Islamist forces in the Middle East seek to redefine power relationships within the international system post-2010. Furthermore, it sheds light on how Islamist ideology has emerged in the face of reality (e.g., opening up to democratic principles or cooperating with non-Muslim states) and examines how political Islam players put their ideology into action concerning foreign policy and international relations. After a foreword by Olivier Roy, the book has seven chapters. Mohamed-Ali Adraoui, the book’s editor and author of its first chapter, is currently a political and social scientist at Georgetown University. The author specializes in the Islamist movements and parties within the Islamic world and their exercises in the political sphere, of which this book is an outcome.

In the first chapter, Adraoui discusses the interaction of the Islamist parties with international relations. The subtitle of the chapter, which labels this relationship a “dialectical relationship,” deals with the difficulties that arise due to this conceptual framework. Hence, the concepts of foreign policy, Islamism, and political parties, and trying to bring them together in the context of different nations became possible during the early 21st century after “Islamist” parties came to power in Muslim-majority countries. This edition seeks to accomplish this task by analyzing political parties in Morocco, Tunisia, and Türkiye, as well as social movements in Egypt, Palestine, and Lebanon, with each country covered in a single chapter, respectively. Thus, the book tries to shed light on the stance of Islamist-rooted politics within the international arena. The challenges of modernism caused reactions against it in the political arena in different forms, one of which appeared as Islamism with a peculiar discursive focus on returning to Islam’s roots. A dreamed global “imagined solidarity” (p. 7) has been used as a tool for Islamist designs throughout the 20th century and at the beginning of the 21st century.

Islamism transformed values and religious norms into a political program in the form of a distinctly modern entity: the mass political party. The first instance of this was seen in Egypt in the 1920s with the emergence of the Muslim Brotherhood. As an outcome of the nation-stateera, Islamist parties have always been in the middle of the tension between the global umma ideology and nation-state understanding. This tension ultimately caused the nationalization of Islamist parties’ political discourses.

These narratives faced challenges in the international arena, where they had to move within nationalist frameworks to implement a foreign policy that opposed their ideology of Islamism in terms of its globalizing claims. This volume tries to address this dilemma by framing the foreign policies of each country in which Islamists took power.

The book’s general claim is that mobilizing society for a protesting form of Islam is not the same as ruling in the name of Islam is convincing after observing Islamists’ rule in different countries. We come across reflections on this general claim in different chapters. Haoues Seniguer discusses in the chapter 2 how Morocco’s Justice and Development Party (PJD) relativized its messianic accent and utilized a more political and rational polity after the 1997-98 elections, which we can take as a good example of the hypotheses put forward in the first chapter by the editor. Maryam ben Salem from the Sousse University of Tunis talks about a similar process of the Ennahda movement of Tunis in the chapter 3. The movement undertook similar stages of adaptation to the logic of a modern party, and the former “idealist” claims lost themselves to the realities of “international relations.” The author accentuates this argument by differentiating the “constant” and “change” after the elections in 2011.

In chapter 4, Tewfiq Aclimandos from Cairo studies the case of the Muslim Brotherhood, which was more complex because of the movement’s long history in Egypt and because they had to face many risks and problems during their short tenure in government. Aclimandos argues that the Brotherhood could not convince Egyptian society with their frankness of tackling the risks and problems. He references the nuances of the Brotherhood’s ruling period as internal coherences, weak points, different strands and tendencies of the movement, their effort to consolidate the governance, and their successes and failures in compromising Egypt’s deep state. The controversy regarding the reciprocal relationship of these internal developments with the international ones was also discussed, showing the process of the Brotherhood’s government from the start toward the end.

Leila Seurat from Florence discusses the case of Palestine chapter 5. The situation in Palestine is somehow distinct due to the existence of several actors and the occupation. Hamas, as a non-state actor, is a specific case; hence, it plays an international game because of its position in Gaza. During the manifestation of its power in the international arena, Hamas avoids an ideological approach to prevent isolation policies from international actors. This can be observed easily after the victory of Hamas in the Palestinian elections of January 2006. Although we cannot discuss Hamas as a “classic” actor, its foreign policy resembles other states’ policies in the international system. Because of the particularities of the Hamas case, the tensions between the real policy and normative policy and its implementation cannot be evaluated on a firm basis. Seurat successively shows how Hamas shaped itself for the general framework of the “international relations” arena even though it faces many challenges due to the conditions the movement has dealt with over the decades.

Hezbollah’s stance toward the Lebanese state and the international scene also carries its own distinct position, covered by Aurélie Daher from Oxford in chapter 6. As Daher shows, we come across the effective use of a specific ideology discursively and practically, namely Shiism, as a discriminatory factor within the Islamic world, politically and historically, against local and Western powers. Historical specificity connects Hezbollah to Damascus or Teheran more easily than other groups in the region. This connection transforms it into a special actor in the Middle East. Because of political developments in Lebanon, Hezbollah finds itself in a situation of continuous resistance, leading it to adopt an active foreign policy with international actors to keep its resistance position intact. Under the pressure of the policies of Damascus and Teheran, supported by them while being subordinated to their policies, Hezbollah feels international powers pressure simultaneously, which leads the movement to constantly produce violence to secure its survival.

Türkiye’s experience in the 21st century might provide interesting insights into the ideological and political tension. Jean-Baptiste Le Moulec and Aude Signoles present a study on the diplomatic practices of the Justice and Development Party (AK Party) since 2002 in the 7th chapter of the book. They approach the topic from the triangle of “national interest, the identity of the state, and foreign policy.” (p. 153) Since the beginning of the AK Party’s rule in 2002, the West has perceived its foreign policy as “Islamic” and more oriented toward the East. Disregarding the geopolitical role of Türkiye in the world, any attempt to restore it through multi-dimensional foreign policy has been labeled as a “rupture” from the old ways.

Changes in the structure of the international system and Türkiye’s “reform” packages for the EU coincided with the severe economic crisis of 2008 and allowed Türkiye to adopt a multi-dimensional international policy. Türkiye’s positive capacity to transform itself makes it a model (p. 170). The authors chronologically discuss the steps toward being a “model” with a deliberate focus on feeding the ties with the Islamic world to establish better-consolidated relationships within that sphere. Economic success and the democratic character of the regime, labeling itself “conservative democrat” rather than “Islamist,” made Türkiye a leading example for newly rising powers. On the other hand, the rapprochement of Türkiye with the Arab world is in harmony with Türkiye’s opening toward the international arena. This broad approach has led to dense bilateral relationships for Ankara with countries with it has established new diplomatic ties. However, after the Arab Spring and its impact on the Middle East, the Syrian civil war, and other affairs, many well-developed relations have been harmed.

The book enables the reader to compare the practice of an ideology in six countries. For each country, a meaningful discourse analysis for the diplomatic practices has been conducted to convince the political scientists and experts of international relations how the tension between ideology and its implementation took place in the first decades of the twenty-first century. This content enables us to grasp significant aspects of the difficulty of harmonizing a sacred and religious understanding into the more mundane, practical, and multi-sided realm, i.e., international relations. 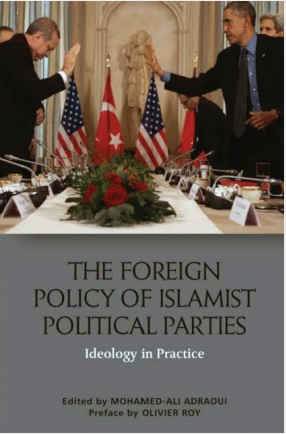 The Arab Revolution of 2011: Reflections on Religion and Politics