The Ghazi Sultans and the Frontiers of Islam

But Anooshahr is little interested in the stuff of battles and empire-building per se, not to speak of the day-to-day messy politics of each reign. (One result is that readers with little background in the “Middle Period” of Islamic history, the eleventh to the sixteenth centuries, will likely struggle with the many allusions scattered throughout). Rather, Anooshahr’s aim is to understand how would-be Muslim monarchs “evoked the memory of the ghazis of yore” in a project of fashioning themselves as “ghazi kings” (p. 2). It is a study, in sum, of ghaza as an instrument in a process of “self-fashioning” by men of power and ambition. The project was one of wielding symbols and language drawn directly from Islamic history, tradition and, especially, texts in an effort to legitimate. It is, in a word, a study of imagery, discourse, of careful propaganda.

But the book is also, and principally, a study of the books produced by and about the rulers in question, notably the remarkable Baburnama, about which Anooshahr has much to say. He is clear in indicating his desire to contribute to a still lively debate over what is clumsily termed “Islamic” historiography. He is, in his opening chapter, broadly critical of the efforts of predecessors. Among the merits of the book is reliance on a wide range of sources, in at least five languages; Anooshahr appears to know Arabic, Persian, Ottoman Turkish and Chagatay. Instructors in Islamic and Central Asian history may find the book a useful source as Anooshahr translates extended passages from a number of texts.

The evidence, as marshaled here, leaves little question but that each of the dynasts exerted considerable effort at convincing all who would listen – including, of course, their own retainers and fighting men – of their proper heroic role. They fought with horse and drawn sword but no less with signs, symbols and language (p. 57). It was Babur’s gift that he wielded sword and sign with equal verve; Anooshahr argues that Babur’s skill in fashioning a public image is the best explanation for his success in overrunning India. His achievement lay, first, in producing a body of Persian-language propaganda (in the form of sermons, proclamations and his own memoirs) then, secondly, in having the material communicated to the elite of South Asian Muslim society (pp. 50-57).

The effort, of fashioning the image of “ghazi king,” was of several parts. First, the princes had to read or, at least, have others read for them. Babur and his illustrious predecessors turned (or had others turn) to appropriate texts from which language and lessons were drawn. In Babur’s case, it was reliance, often and directly, to works produced by the courts of, precisely, Mahmud of Ghazna and Murad II. Second, the dynasts then turned to the project of self-imagery itself, using what they found in the texts but driven by the ideological and political demands before them. Finally, and crucially, these same rulers shaped their conduct in the field to fit the written word. It is this last idea that drives much of the discussion and, indeed, Anooshahr wishes it to be his central contribution. It is that Babur, like his earlier counterparts, was driven to act, in his case, by what had he had produced in the pages of his great memoir. We are, in sum, to read the Baburnama, as we are the books associated here with the Ghaznavid and Ottoman rulers, as virtual scripts.

This is a provocative and intelligent book, and promises to engage specialists in various disciplines of Near Eastern, Central Asian and Islamic studies. But questions remain. Anooshahr wishes to see a common effort at work in the representation of a series of Turkish/Central Asian princes, an effort, in other words, that joins works written across Near Eastern and Islamic history. But the Baburnama is quite a different sort of book – on several levels – than, say, the chronicles of al-Tabari (d. 923) and al-Mas'udi (d. 956) (pp. 75-83). The latter works were produced earlier and in quite different socio-political circumstances than even, say, those of Nizam al-Mulk and Abu Nasr al-Utbi (both eleventh century). Too little effort is made here in marking such distinctions. But, more to the point, Anooshahr is perhaps too eager to press his sample texts to the mold. This reviewer wondered, for example, if al-Mas'udi really intended to craft an image of the ninth century Abbasid commander – a Turkish slave officer, Bugha the Elder/al-Kabir (Anooshahr’s reference to him as “Bugha the Great” misses the point that a second Bugha, the Younger/ al-Saghir was on hand) – and, by extension, “the noble foreign warrior” (p. 81).

Also, one balks in reading that Babur’s political and military successes and presumably, by extension, those of earlier dynasts, are to be largely understood as the fruit of propaganda (that is, self-fashioning, pp. 38-39, 57). In Babur’s case, previous scholarship perhaps placed too great a stress on the role of gunpowder in the founding of the Mughal state. But to set aside consideration of battlefield success, however achieved, not to speak of such other patterns of empire-building as patronage and economic development, seems reckless. The effort to manipulate information and imagery certainly must have been necessary but it is quite a different matter to assign it a solo performance. 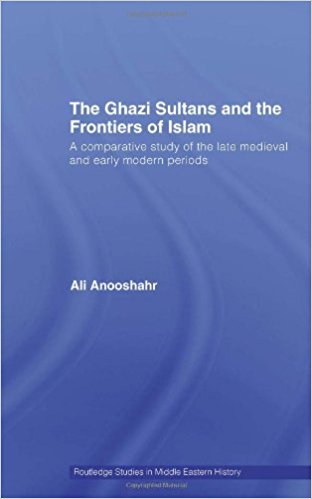