The Nationalities of Europe: The Growth of National Ideologies

In The Nationalities of Europe, first published in 1945, Munro Chadwick investigates the issue of nationality and opens a discussion about the growth of national ideologies in Europe, with an exclusive concern for language and linguistics. At the very beginning of the book, he clearly states that “he is not concerned either to defend nationalism or to condemn it” and he presents his main purpose as “calling attention to the need for more knowledge, not only of national movements –their characteristics and causes, and the ideologies associated with them– but also, and more especially, for more knowledge of the nationalities themselves” (p. vii).

In The Nationalities of Europe, first published in 1945, Munro Chadwick investigates the issue of nationality and opens a discussion about the growth of national ideologies in Europe, with an exclusive concern for language and linguistics. At the very beginning of the book, he clearly states that “he is not concerned either to defend nationalism or to condemn it” and he presents his main purpose as “calling attention to the need for more knowledge, not only of national movements –their characteristics and causes, and the ideologies associated with them– but also, and more especially, for more knowledge of the nationalities themselves” (p. vii).

Chadwick largely bases his evaluation of the issue of nationalities in Europe on a binary approach. He suggests reading European nationalism and its growth firstly, and most significantly, through its language(s) and secondly through its interplay of knowledge and ignorance. In the first chapter, Chadwick focuses on all possible relations between nationality and language and all the differences between them. According to him, while nationalism is “a vivifying and inspiring force,” language “is a stimulus of a powerful antagonistic force;” he contends that, “all nationality movements on the Continent seem to be connected with language” (pp. 2-3).

Chadwick investigates what kind of nationality can be derived from a language, spoken by both minor and major components of any kind of communion, and he discusses “the feeling of nationality” in detail. Chadwick makes a distinction between nationality and patriotism, arguably examining the concepts more philosophically. He defines nationality as something “inspired by opposition or aversion to persons and things which are strange or unintelligible.” In contrast, he understands patriotism as springing from “love of home and the desire to preserve and to protect it,” and adds that “both are natural and primary feelings” (p. 3). The first objection to this study can be raised in this respect. While Chadwick directly draws a parallel between patriotism and the feeling of ‘loving and protecting home,’ and between nationality and the tendency of ‘aversion,’ he does not go in further detail about why and how those feelings can be seen as ‘natural’ in this context. The connection and differences between nationalism and patriotism are a rather intricate issue, which Chadwick examines primarily from the linguistic point of view; the criticism might be raised that the differentiations between the above-mentioned concepts, and the analogies between those feelings deserve to be evaluated in terms of sociology, socio-psychology, and even anthropology.

In the chapters which follow, Chadwick devotes considerable space to the formations of the linguistic map of Europe, and tries to indicate all possible and relational linguistic boundaries, and the correlation between the concepts of nation and kingdom both historically and politically. These parts of the study are quite descriptive and detailed. In addition to maintaining a linguistic point of view, Chadwick also questions the issue of knowledge and ignorance in his discussion of the growth of national ideologies. It can be inferred that in this second part of the study, the author touches upon issues that will enable the reader to extrapolate Chadwick’s observations from many different perspectives, despite his primary focus on the British public. Negligence and ignorance are the fundamental issues for which the author urgently wants to find remedies. He considers ignorance as a defect that has “pervaded all classes and sections” of the community (p. 183).

Although Chadwick drew attention to the problem of negligence and ignorance seventy-three years ago, the value of this significant concern is still preserved, especially when the country we live in today and today’s Europe are taken into consideration. We can think of the Syrian refugees, who are trying to survive in other countries because of the war in their country, for instance. Today, when we consider the diversity of responses and discourses towards the Syrians who have begun to live in Turkey, we can comprehend how Chadwick’s concern is relevant to contemporary issues and events. In this respect, Chadwick’s concern can be applied to the contemporary issues in today’s Turkey, for example through questioning what sense of common social belongings connects the Syrians living in Turkey, and the Turkish people? How may a deeper merging be achieved? Through religion, language, geography, politics, or economics? And how and when do people situate themselves and begin to imagine themselves in common with others?

Chadwick’s closing suggestion of a remedy for the ignorance and negligence he bemoans is based on humanistic studies, and may be achieved, he argues, through the organizations of the “Institute of Imperial (or Commonwealth) and International Studies” in order to “promote knowledge (…) by training students and encouraging research in them, and [making] such knowledge accessible to the general public” (p. 195). The author problematizes the language, history, and linguistic courses offered to students in his era; it can be argued that the present-day humanity studies, international studies, area/country studies and language courses offered by universities and governments for their students and people are marked by greater diversity and variety. However, despite this abundance, the question can still be raised as to where exactly we are today in terms of knowledge and ignorance about other peoples.

All in all, I think that the solutions proposed by the author at the beginning and at the end of his study still preserve their vitality, despite the enormous differences between today and the period in which the study was first published. Today, we should still heed what Chadwick recommended to us: “If we are to understand the characteristics and feelings, the ideologies, of other peoples, we must pay attention also to their past history, both political and cultural, their institutions, and the conditions which gave rise to their special characteristics” (p. viii). 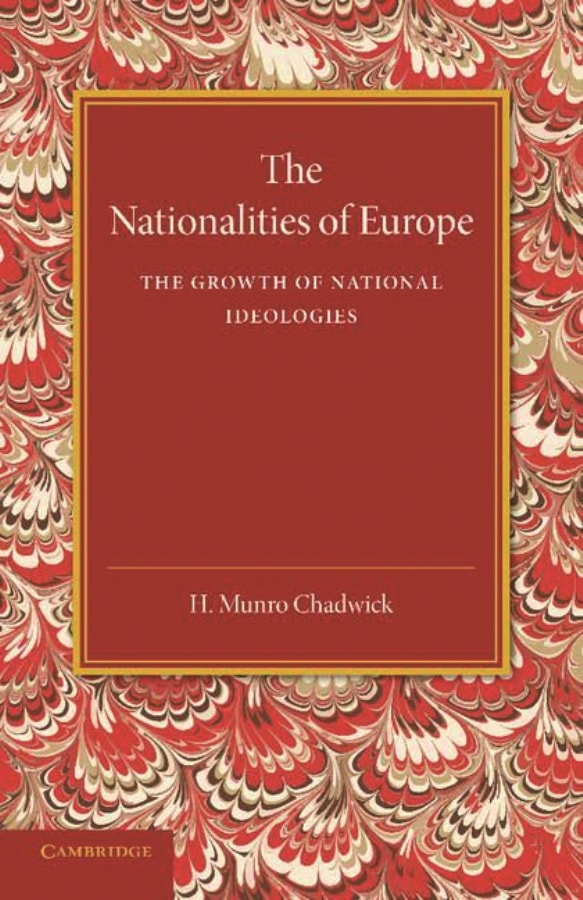