The chief aim of this slim volume, part of the Cambridge Military Histories series, is to reconsider the question of the Ottoman decision to join the side of the Central Powers in World War I. Most historians have fingered Enver Pasha, Minister of War of the Committee of Union and Progress (hereafter CUP), for the decision. Enver is generally portrayed as militantly pro- German and pan-Islamist, part of a revolutionary cell which first toppled the sultan in 1908 and then assumed full and increasingly dictatorial powers in a Putsch in Istanbul in 1913. Enver Pasha and his circle have been accused of having been “corrupted by German gold, blinded by German promises, pressured by German diplomats,” and “of having hijacked Ottoman policy” in the waning days of the empire, bringing about its demise. (p. 1) The “main surprise” of his research according to Aksakal is the lengths to which the Ottoman government went to postpone entering the war, specifically in the period from August to the end of October 1914 when a German-Ottoman attack on the Russian fleet in the Black Sea ended the suspense about Ottoman participation in the war. (p. 2)

The book has several contributions to make to the debate over the CUP. Aksakal is well grounded in the Ottoman memoirs of the war and Republican historiography in addition to the documentary records that survive in the archives of several countries. To demonstrate the Ottoman mood, Aksakal has made himself fully conversant with the intellectual and emotional atmosphere of Istanbul after the humiliating defeats of the Balkan Wars (chapter 1). Repeated diplomatic and military failure had created a deep psychological crisis which Aksakal argues was likely widespread and receptive to ethnic manipulation, not as later Republican historians would have it, limited to the guilty inner circle. He briefly likens the atmosphere and evocation of Turkish nationalism and state survival to Spanish imperial nostalgia of the nineteenth century and to late Qing China, where intellectuals decried and resisted western interventions, a subject Cemil Aydın has recently taken up.

To demonstrate Ottoman reluctance to enter the war, Aksakal has consulted both the German and Ottoman archives, including those of the Turkish General Staff in Ankara, not the most accessible of records, but increasingly open to research. His fluency with diplomatic and military circles and communications in Sofia, Vienna, Moscow, Berlin and London is evident in chapters 4 and 5. A very dense but informative story unfolds about repeated Ottoman delaying tactics to declare war on Russia and the Entente while extracting considerable war materiel and financial benefits from their German allies. The turn to Germany had occurred after all previous friends (and even the Russians) had rejected alliances or financial aid in the form of loans. All were mobilizing for war, of course, but also preparing to grab their share of the divided empire. All were waiting for news of the western front, once hostilities began, in the hopes of a short war. A picture emerges of the pivotal role of Russian aggression, especially concerning the Straits and the eastern, Armenian frontier; of Bulgarian neutrality as a rapprochement occurred between the former belligerents in the struggle against Serbia, and of German reluctance for the original alliance, and then concerted pressure by them to create the Ottoman diversion in the Middle East. Aksakal is equally good at detailing the divisions among the Ottoman bureaucrats themselves. Enver Pasha was instrumental in many of the conversations, but clearly other officers of the government and Ottoman ambassadors in all the aforementioned cities had a role to play. What may surprise many non- specialists reading this text is the degree to which the Ottomans were deeply immersed in and sophisticated about European inter- national politics.

For non-Ottoman specialists, the core chapters of this book may prove a bit dauning. Perhaps an enlarged introduction to the latter-day Ottoman Empire would have enhanced its accessibility, but as a peek through a key-hole into a particular crisis it succeeds superbly. The decision to go to war, it will be remembered, led to the greatest loss of civilian life of any of the participants in World War I (20%) and the creation of twenty-seven successor states at last count.

Coincidentally, A Brief History of the Late Ottoman Empire, a close study of the emergence and psychology of the CUP by the master on the subject of the Young Turks, Şükrü Hanioğlu, has just been published. Combined with the works by Richard Hall and Edward J. Erickson on the military preparedness and performance of the Ottomans 1912-1918 and a study of the British soldier’s experience of Egypt & Iraq by David R. Woodward, the student of World War I increasingly has access to the eastern front, that is, the Middle Eastern front of the Great War beyond Gallipoli and Lawrence of Arabia. 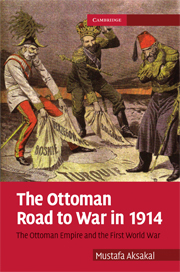 Discussing Recent Literature on Turkish Politics: The Myth within the Myth