The Politics of Fear: What Right-Wing Populist Discourses Mean

The European political landscape has been changing gradually from left to right wing since the end of the Cold War. Particularly in the last decades, the people have turned towards right wing populist parties (RWPPs, henceforth), which have diminished the votes of mainstream political parties almost all over the continent. The electoral breakthrough of RWPPs across Europe was made possible by the casting of at least 30 million votes according to some calculations, in a trend that has gained great momentum over the past five years.Right wing parties have gained enough leverage to be pivotal in some countries. The steady surging of RWPPs and the transformation they are causing has drawn the attention of many academics from different disciplines and has greatly increased the number of studies on this matter.

The European political landscape has been changing gradually from left to right wing since the end of the Cold War. Particularly in the last decades, the people have turned towards right wing populist parties (RWPPs, henceforth), which have diminished the votes of mainstream political parties almost all over the continent. The electoral breakthrough of RWPPs across Europe was made possible by the casting of at least 30 million votes according to some calculations, in a trend that has gained great momentum over the past five years.1 Right wing parties have gained enough leverage to be pivotal in some countries. The steady surging of RWPPs and the transformation they are causing has drawn the attention of many academics from different disciplines and has greatly increased the number of studies on this matter.

Ruth Wodak, Emeritus Distinguished Professor and Chair in Discourse Studies at Lancaster University, examines the discourse and communication strategies of these parties in her book The Politics of Fear: What Right-Wing Populist Discourses Mean. She traces how the discourses and strategies of these parties persuade people to vote for them, and why they are quite successful. She mainly argues that these parties pump fear into the community, which consequently changes voting behavior. RWPPs intimidate people by arguing that under the current migration policies they will lose their welfare and their job, their culture will change, gender roles will change, and they will disappear if it goes on like this. These parties profit from conditions like the global financial crisis, migration flow to Europe, the negative effects of the Arab Spring, and the rise of fundamentalist religious movements. The fear RWPPs monger serves to construct a positive ‘us’ against the negative ‘others,’ which ultimately destroys the community.

Wodak draws upon her influential work, the Discourse-Historical Approach (DHA), which has become indispensable in Critical Discourse Studies; DHA allows for the application of macro and meso level contextualization to the micro level analyses of texts (p. 50). Wodak examines populist rhetoric through audio, visual, verbal and written materials, and attempts to expose the workings of anti-immigrant, xenophobic, racist, Islamophobic, anti-Semitic, nationalist, nativist, anti-elite, chauvinist, and historical revisionist discourses throughout the book.

The book consists of eight chapters. The first chapter begins with a discussion of the definition and scope of populism, with special attention to right wing populism, its form and exclusionary content. Wodak explores the roots of populism in the 19th and 20th centuries and traces its historical developments and national differences. The chapter closes with an explication of the RWPPs’ pattern of cleverly using media by creating scandals and constructing the politics of fear. Chapter two reviews the literature on right wing populism and presents theoretical approaches. Wodak then discusses the rise of RWPPs in the European Parliament and Western Europe since 1990 with statistics of election results. The graphics show not only the rise of RWPPs, but also their fall in some European countries. The author stresses that the book is dealing with the general trend of their rising while giving some reasons for their fall. Wodak further discusses the identity and territorial border politics of RWPPs and EU skepticism to understand the electoral gains of these parties. Also, she claims that the global financial crisis has fed RWPPs since 2008.

Chapter three analyzes the language and discursive strategies of RWPPs. It presents their argumentation patterns and explains their schemes and deliberate logical fallacies with methodological elaborations. According to the author, the terms ‘unity,’ ‘cohesion’ and ‘nation’ appeal to ethno-nationalist populist parties, which employ these terms to justify their exclusionary politics and consequently their tight security policies. Denial, ambivalent apologies, and conspiracies are presented as their language strategies. Chapter four is dedicated to right wing populist nationalism and its identity construction processes. Wodak argues that RWPPs build ‘us’ as the owners and protectors of the fatherland, and ‘others’ as dangerous invaders. The concept of ‘mother tongue’ which is related to nativist body politics helps them draw borders between ‘us’ and ‘others.’ ‘The Real Hungarian’ example in this chapter is considerably remarkable in revealing the borders between ‘real’ and ‘unreal’ categorizations. RWPPs oppose cosmopolitanism, post-nationalism, European citizenship and multilingualism (p. 72). In their rhetoric, the body, family and nation trinity should be preserved against deterioration. Further, the author argues that the normalization of exclusionary rhetoric has already begun.

Chapter five examines RWPPs’ anti-Semitic rhetoric and deconstructs their denial of the Holocaust in a systematic, qualitative way. It argues that not only anti-Semitism but also Islamophobic judgements coexist together, meaning that they are not interchangeable. It reveals how RWPPs use coded language and calculated ambivalence to avoid being blamed for racism. Chapter six exhibits the faces of some RWPP leaders and politicians, especially focusing on Austrian FPÖ leader, HC Strache. RWPP politicians present themselves as ordinary ‘left behind’ people, and as good citizens saving ‘us’ from the ‘others.’ They show different performances frontstage and backstage, and repeat particular behavior patterns both in digital communication and traditional media. Charismatic, male, media savvy, young and demagogic leaders convey RWPPs’ messages to the masses and persuade their audiences with the many complex communication strategies elaborated here.

Chapter seven is devoted to the patriarchal discourse of RWPPs. Conservative family values, homophobia and anti-abortion campaigns, which are a part of the gendered discourse of RWPPs, serve to give power to men, who are depicted as victims of modernization. The chapter categorizes the voters of RWPPs according to sex and comes to conclusion that mostly men are voting for RWPPs. The patriarchal discourses deliberately target the headscarves and burqas of Muslim women, ostensibly for two reasons i) to protect women from oppression by Islam, and ii) to empower and liberate oppressed Muslim women (p. 157). In the final chapter, the author combines all her arguments and discusses the normalization of the RWPPs’ exclusionary discourse in the mainstream which she conceptualizes as the “Haiderization of Europe” (p. 178). After repeating her main argument that fear dominates RWPP’s political agenda, she asks a critical question: How to avoid falling into the ‘trap’ of their discourses? She asks readers to learn from past experiences and oppose the normalization of exclusionary politics. She proposes empowering an inclusive discourse of ‘we’ instead of ‘us.’ The book concludes with a useful glossary of RWPPs.

The Politics of Fear addresses a complex phenomenon; the author accepts its nature and wisely avoids any issues beyond the book’s scope. Wodak cleverly discovers the discursive and communicative patterns of RWPPs and paves the way for new research and discussions. Although it doesn’t provide an accurate formula to avoid the ‘trap’ of RWPP discourses, the book’s implications and insightful analysis provoke new discussion. For example, notable political theorist Chantal Mouffe proposes promoting left wing populism against right wing populism.2 Every academic studying left or right wing populist parties needs to read the book to enrich their arguments. Further, the book is beneficial for social researchers because it provides an absolute example of comprehensive research design. Also, it perfectly shows how to apply the Discourse-Historical Approach in critical discourse analysis both in a qualitative and quantitative way.

The Politics of Fear addresses academics, researchers and students of sociology, gender studies, communication, linguistics, and political science. In addition, the author explicitly aimed to address readers outside of pure academia. Therefore she discloses her concerns about writing style, and uses many images, illustrative texts, interviews, posters, social media sources and vignettes which make the research more concrete (p. xii). However, it seems doubtful whether the aim is reached, as the book contains many academic terms outside the vocabulary range of ordinary readers, and the name and cover image of the book do not seem populist. The author is very intelligent in analyzing populist language, but the book itself fails to reflect the striking populist communication strategies it examines. To fully succeed in reaching a more popular audience, the book’s name and cover image should have addressed the desired audience. 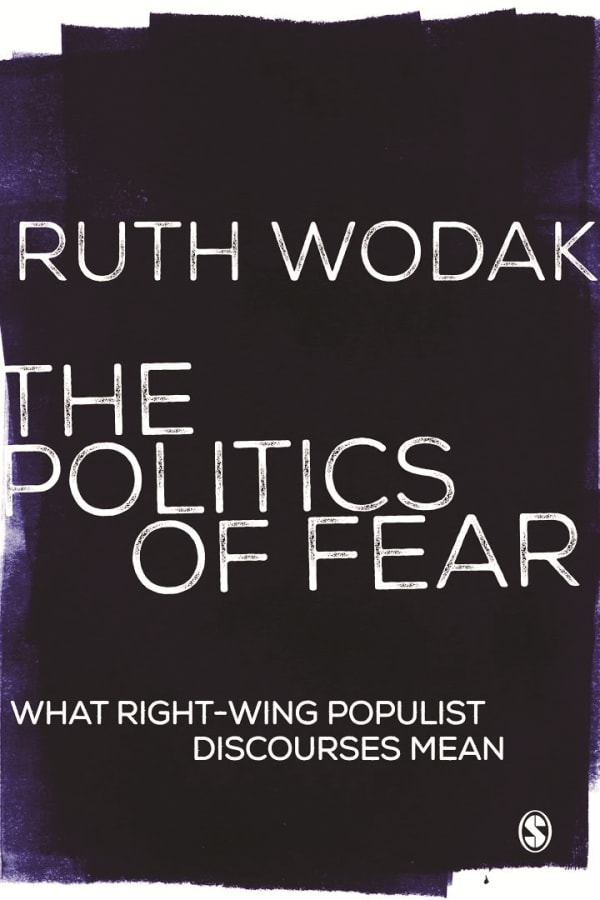