The Rise and Decline of American Religious Freedom

In five chapters Smith looks into the standard story of the development of religious freedom in America and proposes a revised version of it, which revolves around a “Kingdom of God in America.” (p. 12) Smith’s counter-narrative traces the intellectual roots of religious freedom farther back than the Enlightenment to predominantly Christian emphases on the freedom of the church and the liberty of conscience. With a re-interpretation of the First Amendment’s phrase “no establishment of religion” Smith heavily criticizes recent Supreme Court decisions and suggests that virtually all of America’s founders expected religion to play a major role in the nation’s governance.

In five chapters Smith looks into the standard story of the development of religious freedom in America and proposes a revised version of it, which revolves around a “Kingdom of God in America.” (p. 12) Smith’s counter-narrative traces the intellectual roots of religious freedom farther back than the Enlightenment to predominantly Christian emphases on the freedom of the church and the liberty of conscience. With a re-interpretation of the First Amendment’s phrase “no establishment of religion” Smith heavily criticizes recent Supreme Court decisions and suggests that virtually all of America’s founders expected religion to play a major role in the nation’s governance.
Smith challenges the standard narrative of the Americans, as the enlightened innovators of religious freedom, by focusing on Christian elements essential to the idea of religious freedom, such as the medieval theme of libertas ecclesiae (freedom of the church from secular control, i.e. the campaign of the church against a role of kings in the selection and appointment of bishops and popes) and freedom of conscience, the inner church. Smith argues that the First Amendment basically considered religion a topic that should be dealt with by the states and “did not reflect the acceptance by Americans of any commitment to religious equality, secular government, or governmental neutrality in matters of religion.” (p. 8) In Smith’s revised story, religious freedom is less a product of reason, it is rather the ripe fruit of the Christian religion (p. 12) – separation of church and state and freedom of conscience are considered to be the product of the distinctive teachings of Christianity (p. 39). Indeed Christianity knows the difference between the human and divine sphere of power: “Render therefore unto Caesar the things which be Caesar’s, and unto God the things which be God’s.” (Luke 20:21-26 et al.) But it is an ex post-interpretation to see here a clear commitment to secularism and it took some sanguinary religious wars to get that far. Noah Feldman wrote that America today would be divided by “values evangelicals” and “legal secularists;” and Smith terms this the “providentialist” and “secularist” interpretation of the Republic (p. 88) – raising the question whether the Republic is (secularly) religious or (religiously) secular. Smith then portrays establishment clause jurisprudence by looking closer into legal cases starting with the 1947 Everson v. Board of Education decision on subsidizing transportation of students to and from schools (including religious schools), the school-prayer decision in the early1960s, and shortly mentions the more modern debates on abortion, assisted suicide, same-sex marriage, and evolution in the classroom. These decisions create the impression that the secularists have somehow won and fostered an ostensible neutrality of the modern secular state that Smith considers impossible and “a sort of political optical illusion.” (p. 130) Rather, for Smith, the dominant orthodoxies have changed, replacing earlier religious orthodoxies by secular liberal orthodoxies (p. 136). In the last chapter Smith laments that the Supreme Court as well as the Obama administration would no longer single out religious freedom as a special constitutional commitment (p. 139) the way the founders would have favored and there would be a lack of special judicial and political solicitude regarding religious liberty: “Religious freedom RIP.” (p. 141) “The internal development is the erosion of the rationales for religious freedom by a secularism that, ironically, can be seen as an implication or at least an offshoot of religious freedom itself. The mostly independent development is the impressive advance of a formidable political and cultural movement that marches under the banner of “equality” and that bids to become a new national orthodoxy with features reminiscent of those that characterized state-supported orthodoxies during the centuries of Christendom.” (p. 142) Equality is another concept that Smith feels somehow uncomfortable with: “After all, it is hardly obvious (if I may be permitted a gross understatement) that humans are of equal worth, moral or otherwise: we differ dramatically in our abilities, qualities, and virtues.” (p. 148). And furthermore: “modern secular egalitarianism has some of the characteristics of classical paganism.” (p. 153). A paganism that Smith considers a real and serious threat for religious believers as it is fundamentally hostile to their beliefs and ways of life: “Once secular egalitarianism is accepted and entrenched as the prevailing orthodoxy, how much sympathy or toleration can they expect to receive over the long run from their new and puritanically egalitarian secular masters?” (p. 156) “Thus enfeebled, and faced with being flattened by the juggernaut of “equality,” religious freedom’s long-term chances do not look promising.” (p. 168) To cite one example that Smith uses: “Christian Legal Society v. Martinez arose when Hastings Law School, a public law school in San Francisco, denied official recognition to the Christian Legal Society (CLS) because the group accepted as members only students who could endorse its “Statements of Faith” and who agreed to follow prescribed principles, one of which forbade sex outside heterosexual marriage. Because this restriction effectively excluded active homosexuals from being members of the society, the law school ruled that CLS violated the school’s nondiscrimination policy.” (p. 159) The Supreme Court decided that the school was right, religious organizations have no protected rights against nondiscrimination policies. Smith considers this development most alarming: “We may be living in the last chapter of the story of American (and Western, and indeed global) religious freedom.” (p. 166)

Smith’s essay is readable and intellectually written from a law scholar’s perspective, but his arguments seem most problematic for several reasons and must at times sound strange to scholars of history. On the one side Smith causes immense damage to the universal claim of the fundamental right to religious freedom by stressing its Christian elements and also downplaying its negative component, the freedom from religion as an integral part of the universal human right to the freedom of religion and belief. The modern state has the obligations to respect, protect and fulfill freedom of religion for all humans and all beliefs, may these be theistic, non-theistic, atheistic, agnostic or ambiguous. As a human right freedom of religion or belief empowers human beings to freely choose, change and manifest their beliefs. The Catholic Church had hence a long and rather uneasy relationship with the concept of religious freedom and committed to it only in 1965 with the Declaration “Dignitatis humanae”. Smith’s claim that “religious freedom has historically been connected (…) to the church” (p. 164) can be easily challenged. Smith also damages religious freedom as a human right with his distorted interpretation of religious freedom as a special right for religious people of certain creed(s), wrongly assuming that “freedom of religion” as a phrase means something like “freedom of the church” (p. 112). Human rights in general empower human beings; they protect their dignity, their freedom and their claims to non-discrimination. Freedom of religion or belief as a human right protects and empowers human beings in the field of religion. From a human rights approach Smith’s arguments must be most strongly rejected. Smith’s counter-narrative on the origins of separation of power, conscience, equality and toleration is unfortunately often misleading. It is certainly no convincing alternative to the standard story of the development of religious freedom. This book may be valued by Christian parents, who are concerned about potential damages liberal college education could do to their children unless they truly understand late liberalism. 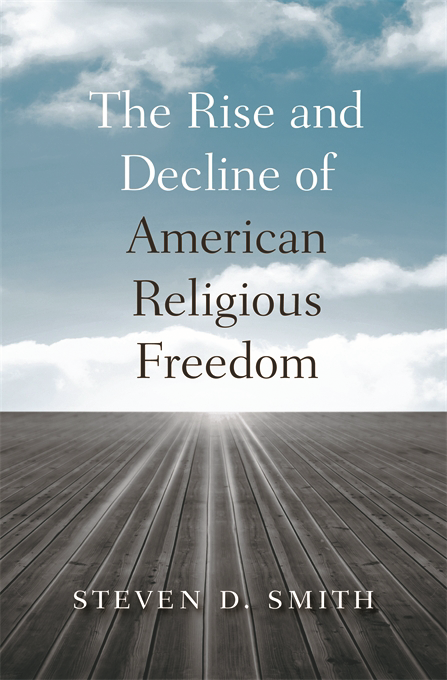