The Rise of a New Superpower: Turkey’s Key Role in the World Economy and Energy Market

During the radical economic transformation taking place over the last decades, which is characterized by the decline of the West, Turkey has emerged as one of the strongest countries to sustain economic progress. This steady economic growth has brought Turkey to the threshold of becoming a high-income country. Turkey has also progressed by accomplishing almost all of the conditions necessary to achieving EU membership, although, according to EU member states, Turkey still has work to do to fulfill the standards. Angelo Arcuri, lecturer at the European School of Economics and Head of the International Business Department at Confindustria Firenze, the Employers’ Association of Florence, describes Turkey’s economic situation in his academic book, The Rise of a New Superpower: Turkey’s Key Role in the World Economy and Energy Market.

During the radical economic transformation taking place over the last decades, which is characterized by the decline of the West, Turkey has emerged as one of the strongest countries to sustain economic progress. This steady economic growth has brought Turkey to the threshold of becoming a high-income country. Turkey has also progressed by accomplishing almost all of the conditions necessary to achieving EU membership, although, according to EU member states, Turkey still has work to do to fulfill the standards. Angelo Arcuri, lecturer at the European School of Economics and Head of the International Business Department at Confindustria Firenze, the Employers’ Association of Florence, describes Turkey’s economic situation in his academic book, The Rise of a New Superpower: Turkey’s Key Role in the World Economy and Energy Market.

Arcuri divides the book into four chapters; in the first chapter the author illustrates the aim of this book, i.e., explaining Turkey’s new central role within the international community. In the second chapter, the author frequently portrays Turkey’s economic advancements, and makes a SWOT analysis of different aspects of these achievements. Under the title of “Energy Market,” Arcuri examines the different strategic role of the Turkish energy sector and its opportunities, including the development of renewable energy policies, and the necessity of EU engagement and Russian placement in nuclear engagements. In the last chapter, Arcuri illustrates the ups and downs of Turkish foreign relations with the EU, the UK and other countries from a historical perspective.

In the beginning, the author pays attention to the field of banking finance in terms of private consumption, infrastructure development by the International Monetary Fund, Turkey’s efforts to reduce its trade deficit with foreign countries, the export of high value-added goods and the widespread privatization plan that led the Turkish economy to grow faster than that of some Eurozone countries. The author interviews the senior manager of SACE (Servizi Assicurativi del Commercio Estero), Mario Bruni, who describes the different types of industrial policies in Turkey. Bruni highlights that Turkey has expanded its technology market in the EU countries and the U.S. with low-price technology products such as electronic devices, motor vehicles, machinery, etc. Bruni also expresses his wishes that the Turkish automotive, textile and clothing industries would enhance their capacity to carry out an internal renewal process to anticipate and fulfill market needs well in advance.

To modernize infrastructural policies and functions, the author focuses on Turkey’s Public-Private Partnership (PPP) projects, its rapidly developed rail transport system and sparking telecommunication sector, which have fascinated international investors. Arcuri cites the World Bank Report, which notes that the income of the bottom 40 percent of Turkey’s population has increased almost at the same rate as the rate of total population growth.

Arcuri highlights the Turkish Airlines (THY) flag carrier was one of the influential actors during the last decades. Established in 1933 as a small airlines company, THY quadrupled between 2001 and 2012, according to its last official statement (2017). Arcuri unveils some of the reasons behind this success, which won THY the best airline in Europe Award consecutively in 2011 and 2012. Bruni notes that Turkish SMEs (Small & Medium Enterprises) are smaller than EU SMEs by a number of employees. Turkey’s success is a function of its development of education and engagement of a wide demographic range, including students, young people, women, the disabled, etc. Arcuri interviews Ertan Uzay, Director of the ABIGEM Center (Avrupa Birliği Türkiye İş Geliştirme Merkezleri), who identifies some specific problems limiting Turkey’s level of competitiveness. These problems pertain to weakness in information & technology and innovation research & development, limited usage of bank loans, insufficient credit guarantee system, insufficient use of modern market strategies, and incognizance of quality & brand concepts.

Arcuri gives special attention to the energy market. After the Russian-Ukrainian crisis of 2006, the EU started to search once again for alternative routes for energy sources. The author highlights Turkey as the best partner for the European Union due to its unique geographical position between the Middle East and Caspian basin. A large number of oil tankers and LNG carriers pass through Turkey, making Turkey a transit hub. The author emphasizes the importance of private companies in this chapter. He argues (incorrectly) that the Turkish state companies held a monopoly until a new private company was launched. The author also focuses on NABUCCO as an important treaty signed between Turkey and Azerbaijan, illustrating that the EU has aimed to utilize Turkey’s geographical benefits in order to create an energy corridor between southern Italy and the Caspian Sea.

The author applauds Turkey as having the most dynamic and promising electricity market on the international scene. Here Arcuri again incorrectly refers to the Turkish state electric authority as a “monopoly,” (p. 26) and reiterates his emphasis on decentralization from state authority. The upsetting thing is the author indirectly denies Russia’s role in Turkey’s renewable energy sector (p. 30) and presents the Fukushima accident as the reason. The author hints at environmental dangers of the Akkuyu Power Plant by comparing it to Fukushima. Here the author shows his double-standard by failing to mention the Marcoule Nuclear Accident in France. Marcoule Nuclear Plant was also established in countryside of France and in 2011 this plant  also faced a disaster. The author suggests countryside nuclear plants are dangerous but the Marcoule Nuclear Accident is overlooked. Because the author presents the EU as a more reliable investor for Turkey’s energy sector.

Turkey’s foreign policymaking is evolving. Through its development of nuclear energy plants, Turkey is stretching its energy route towards Asia. Turkey is also expanding  its relations with China, South Korea and Japan just after its successful negotiations with Russia regarding the Akkuyu Plant. The author attempts to argue that Turkey needs the EU for its legal and institutional framework. But the reality is, as an energy corridor country, Turkey has the right to take its place as a price-setting country.

“Relations with Europe” is the last chapter. Here the author notes that despite the founding principles of the European Union, some EU members have shown hostility toward Turkey’s accession. He cites the launching of a media campaign by France and the Netherlands against the Turks. Unfortunately, the European Union has yet to come to terms with its fear of the ‘Islamization’ of Europe.

In the second part of this chapter, Arcuri discusses how many times the EU accession process has been delayed due to ill-concealed political interests and old ideological prejudices. After encouraging its European path in 1959, the European Union has denied Turkey’s accession several times for insignificant reasons. Despite all of Turkey’s achievements, the EU’s distrust towards Turkey has continued to grow due to soaring increases in inflation and unemployment rates. However, at the time of writing, the unemployment rate of Eurozone countries exceeds that of Turkey.

In the next section, the author declares that Turkey needs to ensure full respect for the property rights of all non-Muslim religious communities and full respect for other languages and cultures in accordance with European standards. Now the question is, which European standards is the author talking about? The Lombardy and Veneto provinces of Italy are still demanding independence, the majority of Scottish citizen are asking for a referendum, and the Basque ethnic group continues to demand independence in France and Spain.

The alarming thing is that Arcuri cites an example from the Uludere Events as an uninvestigated issue. Unfortunately, this is another instance of the author’s bias. The Uludere Events refer to a series of incidents in which smugglers lost their lives in an airstrike. The media spun this news to oppose Turkey’s EU accession and Arcuri does the same. Likewise, Arcuri provides partial information about the Crimean War where France and Great Britain boosted Turkish integration towards Europe by neglecting the fact that revolutionaries from Hungary and Poland supported by Great Britain and France played an active role in the Crimean War.

The author notes the role of the Christian religion in establishing peace in Europe, but unfortunately he glosses over the similar effect of Islam as it entered southern Europe through North Africa in the 8th-10th centuries, tempering  the fratricidal war in which Christians were engaged from 1337 to 1453.

Arcuri mentions that Turkey’s asylum system is far below EU standards. Inappropriately, however, the author missed the news, famed in the Turkish media, which claimed, ‘Syrians are our brothers.’ It’s clear that Turkey accepts refugees on humanitarian grounds, not to improve the Turkish economy, whereas Europe needs more migrant workers for their self-improvement in different aspects.

Finally, Arcuri does note Turkey’s economical structural development, and proposes some action plans for Turkey for further growth. However, at the end of this contribution, the author grants that Turkey can be considered as a part of Europe because it shears in a coherent and convinced manner the European values. Finally, those who want to find the EU’s actual overview about Turkey’s economy and energy sector, this book might be a reference. 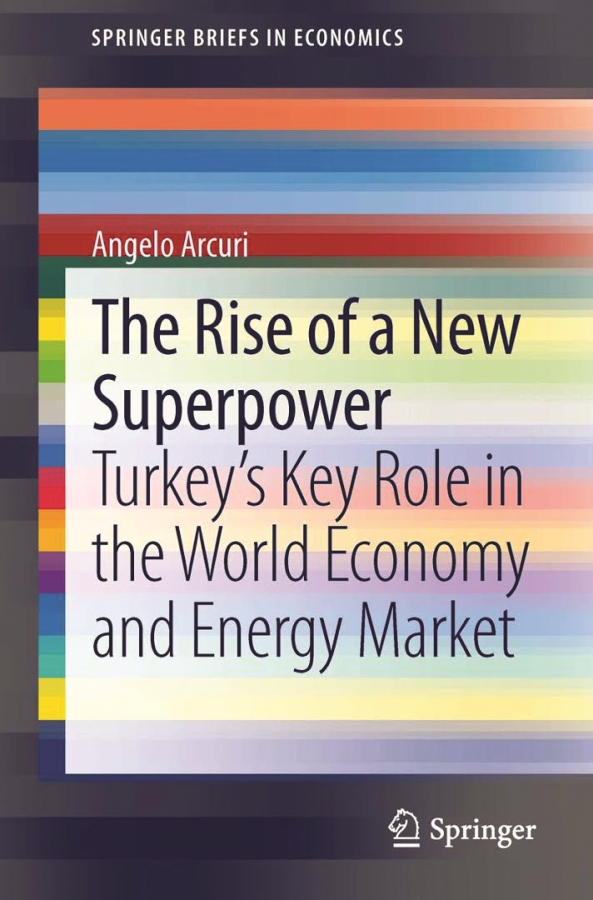