The Rohingyas: Inside Myanmar’s Hidden Genocide

Azeem Ibrahim’s The Rohingyas: Inside Myanmar’s Hidden Genocide traces the genealogy of the problem that Rohingyas are facing in Myanmar–the government’s refusal to acknowledge them as an ethnic minority thereby denying them civic rights. The very first line of the “Introduction” clearly states “the reality facing the Rohingyas…is the threat of genocide” (p. 1).

Azeem Ibrahim’s The Rohingyas: Inside Myanmar’s Hidden Genocide traces the genealogy of the problem that Rohingyas are facing in Myanmar–the government’s refusal to acknowledge them as an ethnic minority thereby denying them civic rights. The very first line of the “Introduction” clearly states “the reality facing the Rohingyas…is the threat of genocide” (p. 1). The ruling government’s as well as the opposition’s inattentiveness to their miserable condition has put the Rohingya population in a dilemma–either flee or die. They have been recognized as Bengalis from Bangladesh who migrated to Myanmar during the colonial era, thus, they are excluded from the picture of nation. “Global indifference” (p. 3) to the issue has exacerbated their woes and Aung San Suu Kyi’s visibility in mainstream politics hasn’t changed much. These happenings not only blemish the picture of Buddhism as a peaceful religion but also Myanmar’s categorization as a full-fledged liberal democracy.

The first four chapters present a holistic picture of Myanmar’s phase-wise history and the consequences for the Rohingya Muslims. In the first chapter “A Short History of Burma to 1948”, Ibrahim lays out the historical underpinnings crucial to understand Rohingya persecution. Redrawing of territorial borders by the British for the convenience of their administration had serious ramifications for Rohingyas. The “dominant narrative” (p. 33) informed by these historical patterns have led to the identification of Rohingyas as “illegitimate” (p. 33) invaders who pose a threat, as a result, the Rohingyas are considered alien. This is in stark contradiction to the UN Charter which clearly states that “no state can render stateless, as a matter of policy, people born in its territory” (p. 33). Being Burmese by birth, the Rohingyas are legally entitled to Myanmar’s citizenship.

Chapter two entitled “From Independence to Democracy (1948-2010)” elaborates upon the scenario in Myanmar (previously known as Burma) post-independence and the influence of international actors in its politics. Initially, some people favored military rule in order to establish Myanmar as a Buddhist state. Throughout the chapter, Ibrahim gives an insight into the change of political regimes from military-rule to dictatorship to democracy, and the resulting shift in “legal definition of Burmese citizenship” (p. 48). Interestingly, post-independence Myanmar included Rakhine (previously known as Arakan), where the majority of the Rohingya Muslim population live, within its boundaries. However, changes in the constitution reflected racial discrimination against them.

The third chapter “The Return to Democracy (2008-2015)” argues that the shift to democracy worsened “the legal position of the Rohingyas” (p. 53) resulting in a “dramatic escalation” (p. 53) in the violence against them. It narrates the flawed nature of the 2008 Constitution with an “obsessively restrictive approach to citizenship” (p. 57) that denies Rohingyas membership to their birth place. This bars them from exercising their vote. This chapter also highlights the functioning of the political sphere by explaining the role of the military’s political wing Union Solidarity and Development Party and National League for Democracy’s alliance with Buddhist extremist monks to perpetuate anti-Muslim sentiments. Azeem Ibrahim presents particular instances which reflect racial sentiments of the natives, be it in boycotting shops owned by Muslims, or organizing the educational system to promote anti-Islamic messages.

Chapter four, “Implications for the Rohingyas (2008-2015)”, provides an account of the fate of Rohingya’s in the aftermath of their persecution. The close alliance of Buddhist extremists with both Arakan National Party and Rakhine Nationalities Development Party who have a good hold on the Rakhine region have led to the use of ethnic tensions as a “political tool” (p. 80). The 2012 massacres were an attempt towards ethnic cleansing of Rohingya Muslims leaving them with no option except seeking refuge in other countries. “The systemic misery of the Rohingya’s lives is fueling a massive refugee crisis with many seeking to escape by sea to neighboring countries” (p. 90). Fleeing has not provided them with secure conditions of living. The indifference of local and international authorities is largely responsible for the displacement and poor condition of Rakhine Muslims.

In chapter five, “Genocide and International Law”, Ibrahim reflects how prejudice gets transformed into genocide. The state and its policy are the major players in organizing genocide. Normalization of violence against an ethnic group “to justify discrimination and murder on the basis of identity” (p. 103), combined with the international community’s impotence makes genocide highly likely. The penultimate chapter named “Current Situation” offers a detailed discussion of the “plenty of potential trigger points” (p. 108) that can accelerate genocide in Myanmar. The last chapter “What can be done?” suggests the immediate actions that need to be taken in order to avoid genocide. Various measures have to be taken at both domestic as well as international levels. Ibrahim lists various alternatives like partition, pressurizing to abide by the UN Charter on citizenship and nationality, external monitoring, and external pressure from major players like the U.S. and ASEAN.

Azeem Ibrahim’s book is a well-researched treatise that answers the perplexity of a democratic regime’s discriminatory attitude towards certain ethnic and religious groups, by taking recourse in history. It also gives an insight into an extremist form of Buddhism and emphasizes the importance of the international community in restoring peace and justice. It is a must read for anyone who wishes to grasp an understanding of the reasons behind the fate of Rohingyas in Myanmar, and the spelling out of the conditions that might lead to genocide in a democratic framework. 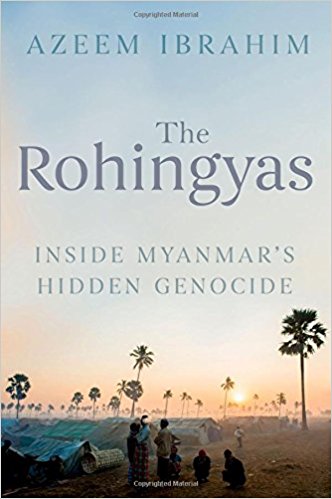