The State of Savagery: ISIS in Syria

Composing six chapters in total, Ulutaş begins with questioning whether ISIS is a state or not. For this, he creates a theoretical framework in which discussing the ontology of non-state actors is prioritized. Ulutaş embeds the scrutiny of their limits and ranges of influence into the evaluation of existing theories on non-state actors. Confronting different approaches at this point, Ulutaş actually remains on the ontological path while explicating what VNSA are, their characteristics, their advantages, factors empowering them and so forth. Importantly, he notes that despite the dominant traditional realist paradigm that refuses any ascription of durable effectiveness to non-state actors, “the war against ISIS itself” waged by many states, makes it an “influential actor in the international system” (p. 39). At the end of this theoretical discussion, Ulutaş concludes by referring to Lynch’s suggestion that constructivism helps the most to understand ISIS because its ideology and identity shape and largely explain its behavior. Therefore, as Ulutaş argues, acknowledging the impact of takfirism and messianism is indispensable in the examination of such a VNSA “that is on the border of holding qualities of a state in the Westphalian sense,” though “the state in ISIS’ mind… transcends borders of nation-states” (pp. 40-41).

Preluding ISIS’ ideological “emancipation” from mainstream Salafi-jihadism, Ulutaş briefly portrays key figures whose fault lines must be understood in order to delineate the transformation from ISI to ISIS. Critics may complain that Ulutaş, similar to Fawaz Gerges, whose works he refers to several times, puts too much emphasis on jihadi leaders, for instance, when he characterizes each by a pseudonym which he uses as subtitles. In doing so, Ulutaş labels Abdullah Azzam as “the original,” Abu Musab Al-Zarqawi as “the mutator,” and Abu Bakr al-Baghdadi as “the beneficiary.” Subsequently, the reader gets the impression that the most significant drivers for the transformation of jihadism are the leaders. To quote one example: “As far as ISIS is concerned, Al-Zarqawi is the “mutator” in chief as he not only parted ways with the original understanding of Salafi-jihadism, but also mutated Al-Qaeda’s Salafi-jihadism into a distinct ideology as employed by ISIS” (pp. 47-48). However, this should not mislead one to think that Ulutaş pays no attention to environmental change. Rather he tries to accentuate the influential role of leaders given the circumstances which enable them to co-determine the fate of jihadism.

Ulutaş makes great use of interviews that he conducted with people who stood close to jihadi leaders or are/were jihadis themselves which turns out to be a quality feature of his work. Accordingly, firsthand accounts such as those about Baghdadi’s personal background based on interviews with Ghassan Al-Rashid or Muzamjeer Al-Sham (pp. 67-68) are relevant contributions. However some assumptions remain speculative. For instance, the claim that there is a likelihood of Baghdadi having previously opposed joining the armed struggle seems to be a loose argument because Ulutaş merely hints at his late involvement in the Salafi-jihadi movement at an organizational level.

Speaking of ISIS’ ideological and strategical peculiarities, one of the central assertions is as Ulutaş argues: “ISIS mostly followed the roadmap drawn by Naji in his book, the Management of Savagery, and put Naji’s theoretical work into practice” (p. 93). Extensively quoting from Naji, the author explains how his strategies are applied by ISIS. Yet, there is no consensus on what dimension Naji’s ideas find implementation within ISIS’ evolvement in Iraq and Syria, suggesting the possibility that Management of Savagery might have had no real reference function. In other words, critics could argue that there is no proof to make this association. Nonetheless, to keenly observing eyes, interesting parallels might occur. In this sense, Ulutaş interprets what theoretical stage cited in Naji’s book may correspond to ISIS’ reality, more precisely, to its phase of evolvement. Speaking of the intransigence of tribal structures, Ulutaş believes that ISI took lessons from its setbacks at the hands of the Sahwa Councils, and again links this to Naji’s recommendation to cooperate with tribes and tribal leaders rather than oppose them. Here, Ulutaş skimps on this instead of providing a satisfactory explanation and he does not extend this matter to the Syria phase which appears like an omission, given the title of his book (p. 95).

Due to the importance of takfirism within ISIS ideology, the subtitle “takfiri license to kill” is worthy of praise (p. 103). As Ulutaş correctly puts it, takfir for ISIS is above all a tool to legalize killing Muslims in order to extinguish its near enemy, those we would otherwise call dissident Muslims (p. 105). Yet, takfir was neither based on a homogeneous understanding of the ‘ulama, nor is it a common practice today, not even among jihadi ranks. That is why Ulutaş calls attention to fault lines between Ibn Taymiyyah’s fatwas and ISIS’ use of them (p. 104), because the latter seems to excerpt whatever complies to its already adopted premises. While elaborating takfirism at length, Ulutaş interestingly hints at Abu Mus’ab al-Suri’s definition of it (p. 106), indicating that there are conflicting perceptions. Maybe it would have gone beyond the scope of this book but a broader take on the khawarij term as considered by ISIS, would have been very interesting.

Dedicating a chapter to the organizational structure of ISIS, Ulutaş explains the activities of military and shura councils while giving brief details about key figures who held posts in these institutions like al-Shishani or Haji Bakr (pp. 149-150). At this point, the author’s interviews with various jihadis from different groups enable a deeper insight into ISIS’ backstage. In striving to look through the organizational nature of the group, Ulutaş sometimes deviates from his chronological narration and lists a wide range of jihadi names, like Al-Awlani, without illuminating their role in the evolution of the group (p. 124). Still, he successfully sheds light on the “governmental behavior” of ISIS pointing at its taxing and self-sustaining practices and undertakes a considerable portraying of foreign fighter recruits.

A strong argument of Ulutaş’s work is the interplay between ISIS and the Syrian regime, as on the whole, if not aiding one another, at least they are not blocking each other’s interests. This seems to be a controversial, however not unfounded, thought. In contrast to other jihadi groups, ISIS’ claim of being a state makes it more vulnerable to infiltration. Remarkably, Ulutaş names Abu Ahmad al-Hawwut as being the Assad regime’s contact person inside ISIS (p. 160).

To conclude, Ulutaş’s work, despite some assumptions which appear to be hypothetical, is highly recommendable, particularly the interesting interviews which render this read quite original. Also the fact that Ulutaş does not hesitate to pick up contested thoughts that will likely take part in future discussions enforces the reader to review former knowledge on this subject. Furthermore, The State of Savagery: ISIS in Syria may stimulate further research on the ideological transformation of the group and clearly emphasizes the great benefits of fieldwork and firsthand accounts. 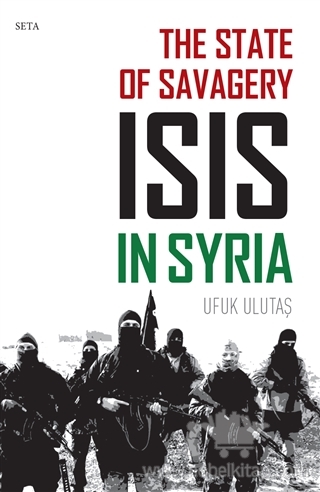 Reviewed by
Serra Can