A professor in the Department of Philosophy, Oleg Bazaluk focuses on war and peace in his book and attempts to develop a philosophical theory of these concepts. As he explicitly expresses at the beginning of chapter two, “Methodology and Axiomatics of the Theory of War and Peace,” Bazaluk’s aim is to develop a “scientific theory of war and peace” based on well-known discussions in international relations (IR) and to determine “the rhizome” of these concepts (pp. 35-44).

The book is divided into seven chapters and a conclusion. In the first five chapters, Bazaluk focuses on explaining his theory; the other two are devoted to implementing it. Every chapter has a conclusion that allows readers to see the summary of discussions and quickly grasp a comprehensive understanding. In the first chapter, the author analyzes the concepts of war and peace on philosophical grounds and determines two lines of reasoning in understanding these concepts. The main reason, according to Bazaluk, is to understand these concepts before formulating a theory (p. 33). While the first line represents Democritus’ ideas and refers to the realist tradition in IR, the second line represents Plato’s thoughts and refers to idealism or liberalism (p. 11). Bazaluk provides a historical and philosophical background for these concepts that IR literature has excessively focused upon, and claims that he follows Plato’s line (p. 43).

After explaining the main lines of thought in the literature of war and peace, Bazaluk determines the main axiomatics or dependent variables of his theory: “Earth’s Civilization” and “Loci of Civilization” or “Sociocultural Centers” (p. 37). In a way, chapter two represents the meta-theory of his approach since he explains his methodology along with the dependent variables. Bazaluk points out that he has chosen “geophilosophy,” an approach that combines philosophy and geography, as the methodology of his theory (p. 43). However, he extends the limits of geophilosophy by adding political philosophy, social philosophy, and psychology to formulate a comprehensive theory of war and peace (p. 107).

The reason why the author has chosen geophilosophy becomes more explicit in chapter three. Bazaluk claims that what we now think of as realities were imaginary at the beginning. To strengthen this argument, he argues that “a nation [state] is a set of nationalities: mental spaces and geographical territories, which are formed and protected by governmental institutions” (pp. 62–63). In this sense, it might be argued that the desire to find the link between geography and ideational spheres led author to use the methodology of geophilosophy. In the following chapter, Bazaluk focuses on the causes on war to argue why there is a need for a theory of war and peace. Bazaluk identifies war as the “violent penetration of one mental space into a locus of another mental space, which entails substantial changes and manifestations” and peace as the “coordinated interactions between mental spaces” (p. 109). From this point of view, the author does not accept that war and peace are consequences of politics but rather argues that they are the “manifestations of mental spaces” (pp. 110, 121).

After explaining his theoretical perspective, Bazaluk tests his theory in chapters six and seven. These chapters are the case study of the author’s theory. Bazaluk identifies the geophilosophy of Europe and claims that there are two opposing civilizations (West/Capitalist and East/Sociologist). In addition to this claim, he argues that the ‘victims’ were the ‘limitrophe states’ (i.e. Ukraine, the Balkan region) or the states geographically close to ‘mental space-aggressors’ (i.e. Britain, France, Germany, and Russia).

Therefore, Bazaluk claims that the geo-philosophy of Europe in the 20th and early 21st century is the relationship between limitrophe states and aggressors (pp. 133-135). In this sense, the cause of war in Europe is the desire to change the “regulatory compromises” (p. 136). In addition to defining the geophilosophy of Europe and determining the cause of war, the author presents his solution for the “coordinated interactions between mental spaces” which is education (p. 117). Bazaluk’s emphasis on education indicates his connection to Plato’s line of thought. Additionally, the author argues that any war might be “predicted” by focusing and monitoring any possible disturbance of regulatory compromises between mental spaces (pp. 147-148). Bazaluk’s claim about prediction most likely derives from the general positivist understanding of theory building in IR. In social sciences it is generally expected that a theory should predict the future. By and large, a theory is a tool for interpreting events. Therefore, this claim might seem a bit problematic for some researchers.

In the last chapter “The European Security Strategy,” Bazaluk discusses the policies that Europe should consider for peace. According to him, Europe has made two fatal mistakes. The first is to pave way for Russia’s revival regarding its economic and military power. Therefore, the author considers that the 2014 Ukraine intervention “predictable” (p. 163). The other is the “political corruption” caused by miscalculation. Bazaluk claims that there is a lack of understanding of the ontology of war and peace which he determines as the predominance of national interests over global interests (pp. 156-157). The difficulty of maintaining a regulatory compromise led the author to claim that “prediction and timely response” are the keys to maintaining peace. Thus, his theory is helpful for such a goal (p. 164).

In the light of the explanation above, it might be argued that the theoretical perspective of the book is close to liberalism. Bazaluk’s emphasis on the elimination of the cause of war and the education of the new generation all point to liberalism. In addition to his explicitly expressed purpose, which is to develop a theory of war and peace, another aim is to warn Europe to establish and maintain the peace.

In addition to the above-mentioned issue with the author’s prediction, some might find his definition of the Ukraine crisis as “predictable” a bit problematic since it is easier to define an event after its results are obvious to researchers. Furthermore, Bazaluk’s reliance on Plato’s line of thought with some reference to realism and other fields of social sciences might not provide a solution for Europe. Bazaluk claims that to maintain a regulatory compromise between mental space-aggressors, all actors’ interests need to be considered (p. 167). While Europe supports Ukraine’s independence, Russia claims that it is its internal issue. Therefore, the problem here is to assume that liberal and non-liberal states would act similarly. In this sense, it seems almost impossible to find a common ground for both opposing sides’ interests in Ukraine.

It is worth mentioning that these critiques do not aim to imply that Bazaluk’s work is full of mistakes or that it is worthless. His attempts to formulate a theory based on multiple fields in social sciences has the potential to broaden our horizons in analyzing any event. Additionally, the author highlights the role of leadership in analyzing events in several parts of the book. When considering the importance of leadership in the current system, one might say that his research might be helpful for foreign policy analyses in IR. Therefore, using geophilosophy –which is not a well-known field in the social sciences– as the methodology and aiming to develop a theory based on the current situation, Bazaluk’s effort should be esteemed. 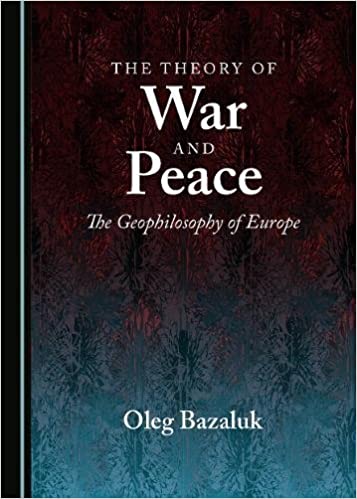