The first six chapters (Part I) are concerned with the “diagnostic of diversity,” while the last eight chapters (Part II) focus on the “handling of diversity.” The first chapter by Bhikhu Parekh is a normative reflection focusing on the diversity resulting from new immigrants, where he uses examples from Britain to illustrate his arguments. Compared to a specific “national” identity (Turkish or Dutch), local/town identities (New Yorker, Rotterdamer, etc.) take root among immigrants much faster, easier, and without causing much conflict (p.46). Local/town identities are based on the real, everyday life of immigrants and natives alike, as opposed to the official constructions or imagined communities. The transformation of the British flag from being a symbol of anti-immigrant xenophobes to being a symbol carried proudly by immigrants to show that they are also part of British society is an interesting experience to draw upon (p.50). While Parekh states that “not even the most aggressive assimilationist wants to suppress religious freedom,” this is probably a “British exception” since there are assimilationists in Continental Europe who want to suppress religious freedoms of immigrants.

In an ingenious and provocative chapter, Melissa Williams weighs arguments of justice and peace in analyzing how politics of fear led to the decline of multiculturalism in Canada, particularly after September 11. She illustrates her argument by using the case of the backlash against the attempt to introduce Sharia-based arbitration of family and inheritance disputes in Ontario. Williams advocates giving deliberative priority to “tolerance” over considerations of peace and security that might otherwise justify suppressing religious freedoms. Hence opting for “presumptive accommodation,” which in her view could justify having Sharia-based arbitration courts.

Leslie Seidle discusses the experience of the Bouchard-Taylor Commission. This commission was established in Quebec in response to popular demand to discuss the limits of minority accommodations, sparked by controversies over incidents of religious accommodations for Muslims, Sikhs, and Jews. The most compelling aspect of the Commission’s work was the establishment of 22 “citizens’ forums” in 17 centers throughout Quebec, where several thousand people expressed their opinions publicly about minority accommodations. Seidle argues that the forums would have been more efficient if the participants were previously educated on religious practices of the minorities whose accommodation was being discussed.

Rainer Bauböck tackles the more fundamental question of membership in a political community. He articulates an innovative concept of “stakeholder citizenship.” Focusing on non-citizen permanent residents and non-resident citizens, Bauböck suggests that “a principle of stakeholdership in democratic polities requires that immigrants should have a residence-based right to full citizenship and that emigrants should have an option to retain their nationality of origin.” (p.125) Bauböck also argues that voting rights for non-citizen residents are compatible with but not required by a democratic principle of inclusion. I found his suggestion that a pure application of “jus domicili,” entailing automatic granting and revoking of citizenship based purely on residence, would minimize the mismatch between territorial jurisdiction and citizenship (p.108) original. Paul L.A.H. Chartrand likewise breaks new conceptual ground by developing four types of citizenship based on the historical evolution of the status of aboriginal people in Canada: Citizens minus, citizens equal, citizens plus, and citizens plural. We learn that until 1982, Aboriginals could be deprived of some of their citizenship rights if the Canadian parliament or provincial legislatures chose to do so (p.137). While their status as citizens actually accorded them “citizens equal” status (p.135), the citizenship plus category afforded Aboriginals rights of “historical priority,” which meant they had claims to their indigenous land, in addition to all the rights they hold as equal citizens of Canada.

Chartrand argues that even “citizenship plus” is not a fair enough accommodation of Aboriginal claims. Instead, he advocates a conception of “citizens plural,” whereby “indigenous peoples are entitled to exercise their right of self-determination qua ‘peoples’ within the states in which they have their homelands, and also are entitled, qua citizens of those states, to the rights, burdens and benefits accruing to all citizens.” (p.140) From this perspective, Aboriginals are “sovereign nations” with a relationship to the Canadian state as a separate state and people.

Compared to the other chapters, most of which proposed novel ideas, the chapter by Philippe Van Parijs’s chapter titled “Grab a Territory!” does not appear to offer anything new with its suggestion of “linguistic territoriality” as the proper method of accommodating diversity in Europe. It was unclear to this reviewer what, if anything, was new in Parijs’ suggestion that every language should assert its primacy in a given territory, since this has been the underlying premise of classical nationalism as well as multinational federalism. As Parijs recognizes, his “linguistic territoriality regime” does not offer any solutions to the vexing problems of diversity: “Which languages are going to be allowed to “grab a territory?” and “[w]hat about the dignity of linguistic communities without a territory to which they could lay a claim.[?]” (p.169).

After discussing “Christianitas” and “nation-states” as previous political identities in Europe, Francisco Colom Gonzalez, in his chapter argues that a comprehensive “reconciliation” can serve as the foundation of a common European identity that can best accommodate diversity, He states, “Modern Europeans need to reconcile with their own historical memory as they need to come to terms among themselves and with the rest of the world for all the global, colonial and civil wars that their ancestors have waged during the last centuries.” (p.249)

Daniel Weinstock reflects on the “failed nation-building project” of long-time Canadian Prime Minister Pierre Elliott Trudeau. Weinstock argues that the Turdeau’s project contains valuable lessons for all countries struggling with questions of accommodating ethno-linguistic diversity through federal and constitutional arrangements. The fact that his ambitious attempt to create a fully bilingual nation with multiculturalism and a “Just Society” as its cultural and economic guiding principles, failed to satisfy the demands of Quebec nationalists does not bode well for those optimistic about democratic management of diversity in a federal framework. Few countries go as far as Canada has gone in designing policies that take into account the country’s ethnic, linguistic cultural, and religious diversity, and yet, it was not enough to dampen the secessionist demands of the Quebec nationalists, and according Weinstock, Trudeau’s project even fuelled secessionism.

Treating EU and Canada together might be seen as problematic, but the chapters demonstrate some important normative and empirical similarities in the debates on federalism and the accommodation of diversity. Nonetheless, given the 23 official, and many more unofficial, languages spoken in the EU, the level of religious diversity, and the size of EU population, this reviewer thought of India as a federation that is more similar to the EU in its pattern of diversity than Canada. Nonetheless, it appears that Canada accommodates linguistic and religious diversity much better than the individual EU member states discussed in the book. Although normative suggestions such as “stakeholder citizenship” and “presumptive accommodation” contribute much to our progressive imagination, the book also suggests that the “politics of fear” that has taken over the Western governments since September 11, 2001, dealt a major blow to the accommodation of diversity, leading to a decline of multiculturalist policies in the West.

This book is appropriate for both undergraduate and graduate seminars that deal with ethnic, linguistic and religious diversity, and I also recommend it for readers who want to familiarize themselves with Canadian politics and identity. 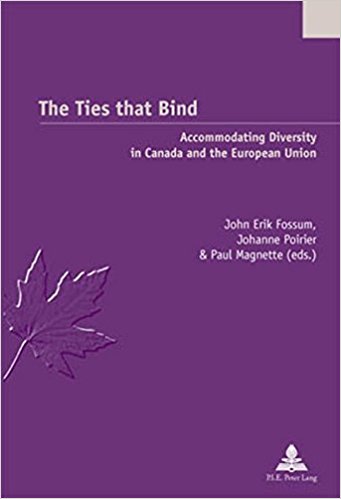