The Wall: The Making and Unmaking of the Turkish-Syrian Border

Ramazan Aras, in The Wall, provides an ethnographic and anthropological account of the border-making practices of the Turkish state along the Syrian border, which most recently culminated in the building of the Turkish-Syrian security wall.

Ramazan Aras, in The Wall, provides an ethnographic and anthropological account of the border-making practices of the Turkish state along the Syrian border, which most recently culminated in the building of the Turkish-Syrian security wall. In his detailed examination of borderland literature, fieldwork in the Nusaybin district of Mardin, and semi-structured, in-depth interviews with local people, Aras reveals that borderland people have the agency to counter the state’s border-making tools. This agency creates some discontinuities alongside the continuities in the border-making process. Locals maintain their own daily practices between Syria and Turkey, despite the existence of state-imposed control points. The Wall contributes to the literature of ‘Actor-Network’ theory by revealing the complex and changing nature of relations between state authorities, local people, and objects in the region.

The first two chapters of the book introduce the methodology of the study and the literature review about the border and borderland studies in Turkey. In Chapter 3, the author investigates the gradual process of border-making since the early years of the Turkish Republic through the introduction of the tools of barbed wired fences, landmines, watchtowers, gendarmerie stations, and border gates. Through the use of diverse security tools, borders become “places of performances of state power and control” (p. 50). Therefore, in addition to Aras’ critical look at state power, it can be helpful to remember the Weberian concept of the state in which three aspects of statehood are emphasized: territory, people, and a monopoly on the legitimate use of force. A state constantly tries to determine its political borders and to use some forceful mechanisms to ensure that people will not cross those borders, a process that damages the pre-existing economic, social, and cultural networks of local people.

Despite the commitment of the nation-state to its border-making policies, the process is not stable, a fact clarified by the periodization made by the author. Although border security laws had been declared in the 1920s, there were not strict controls on Turkey’s borders until the 1950s, which was the result of the weakness of the newly established Turkish state and its institutions (p. 58). Additionally, it is insightful to see how the discourse level differs from the practice level in states that have not yet completed their institutionalization. As a second period, the 1950s are characterized by tightened controls and the placement of landmines. In 1984, a third period arrives with the increased tension between the PKK and the Turkish state. These three periods present some continuity at the discursive level because the state retains the Kemalist Turkification project. In the fourth period, starting in 2002 with Justice and Development Party (Adalet ve Kalkınma Partisi, AK Party) rule, despite the changing discourse and neo-Ottomanist orientation, the border consolidation continued. The decision to allow visa-free travel between Syria and Turkey in 2009 was canceled as a result of the Syrian civil war in 2011, while the conflict and increasing insecurity in the region eventually resulted in the completion of the Turkish-Syrian security wall in 2018 (p. 202).

After questioning not only the concrete but also the transcendental existence of the nation-state on borders through the use of various security tools, the author shares interview data to introduce locals’ perspectives on the issue. Following the placement of landmines in the ‘no man’s land’ between the two countries in the 1950s, many traumatic and tragic events occurred, which are reflected in the oral accounts of locals. Locals made their own periodization by taking the placement of landmines as a turning point. As a temporal expression, ‘after and before the landmines’ are mostly used in their narratives. While before the landmines, border policies were more ambiguous, after the landmines they became more assertive (p. 84). In addition to the landmines, the construction of watchtowers is another control mechanism that increases the anxiety of locals. Aras notes here that it is helpful to refer to Foucault’s concepts of biopolitics and biopower and to evaluate the watchtowers as mechanisms of constant surveillance (p. 90).

Even though the nation-state’s making and building of an ‘imagined community’ persist through bordering practices, local people maintain their own imagination of the border. Through ongoing ‘unmaking’ practices, the concept of ‘border’ appears as not as a stable or static entity but as a dynamic and negotiable one. In Chapter 4, smuggling and other border crossings are examined. Because smuggling is a key unmaking activity of locals, people tend to associate border crossings with economic reasons or poverty. In order to escape the trap of this meta-narrative of economic explanations, Aras urges, religious, social, cultural, and political reasons for border-crossings should also be considered (p. 159). Thus, one can approach border-crossings as a culture and a way of life that can arise not only from poverty but also from different configurations of border-markers (p. 141). In terms of smuggling, there is a kind of societal pressure associating the activity with bravery and courage. The writer reveals the fact that smuggling also has a psychological dimension and symbolic meaning (pp. 143, 161). Through smuggling, one can gain status and can prove oneself to the village. As the act of smuggling proves, the unmaking practices include many complexities in themselves, which necessitate in-depth ethnographic studies. Another sophistication existing in these acts is related to the networks established historically between two border villages. Soldiers, custom officials, and border security guards can be involved in these networks, which creates new power relations in the region (p. 151). Also, state officials prove their agencies against state rule by collaborating with locals (p. 131). As a result, the agencies of several actors contribute to the transformation of the border into an ambiguous and permeable entity (p. 171).

In Chapter 5, the making of the Turkish-Syrian security wall is examined in relation to recent events. According to Aras, the wall constitutes both the breaking point and continuity in bordering practices. On the one hand, it differs from earlier practices because the main reason behind the building of the wall is the security threat aggravated by the Syrian Civil War and the influx of members of terrorist organizations such as the PKK and ISIS. On the other hand, though the main aim is not to consolidate the nation-state, the wall eventually appears as a sort of continuation of previous border-making practices since the separation of families and the resulting pains will be maintained in the region as an unintended consequence of the wall. Additionally, the building of underground tunnels by the local people as a reaction to the wall is mentioned as a part of their unmaking practices. This also shows the deeply embedded nature of the cycle of making and unmaking in the region.

In conclusion, Aras emphasizes that political borders are constructed entities and do not overlap with local memory and historical imaginations. As a result, they are constantly challenged and subjected to deconstruction by locals (p. 221). With the help of various agencies and subjectivities that exist outside the state narrative, Aras reveals the complexities of the process of constructions and deconstructions in the Nusaybin district and examines negotiations, collaborations, and networking among different actors. In this respect, the book provides a comprehensive source for readers and researchers of anthropology and political sociology, specifically interested in the theories demonstrating the interrelated and interactive nature of structure and agency such as Anthony Giddens’ Structuration theory. 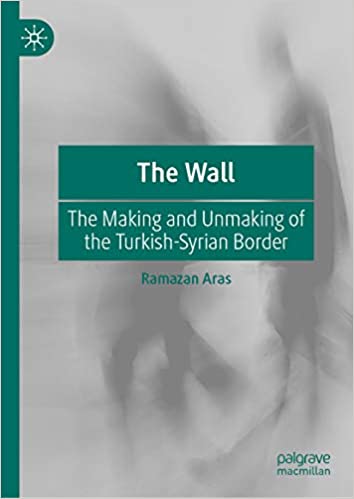