The book adopts a thematic structure in its approach and analysis, and scholars from around the world contribute under five main themes—“Security”; “State, Sovereignty and Authority”; “Globalization”; “Secularism and Religion”; and “The International”—examining how concepts that are central to the analysis of IR are conceived of in diverse parts of the world. In that sense, the book’s stated goal “is not just to ‘provincialize’ or expand its boundaries but also ‘decenter’ IR itself” (p. 2).
In the “Security” section, Pinar Bilgin discusses how the concept of security has been understood in the Arab world and Turkey. Her main argument is that security has been understood “differently different” in both places mostly as a result of historical developments (p. 41). Ole Wæver summarizes the contribution of different security theory schools in Aberystwyth, Paris and Copenhagen, with a special reference to their differences and intellectual environments. Liu Yongtao outlines how the political and academic approaches have changed in China since 1978 in line with state’s priorities. He argues that security concepts among academics in China have been shaped mostly by the state, not vice versa (p. 73). And finally, Arlene Tickner and Monica Herz sketch out the conceptual contribution of Latin America on security. Their claim is that the debate has evolved around parochialism, although there is a ground for a home-grown theorization (p.109).

In the “State, Sovereignty and Authority” section, Siba Grovogui traces the academic approaches to Africa in the west and describes their shortcomings for explaining developments on the ground. His argument is that most analysts use a “pick and choose” attitude in their studies (p. 125). He blames colonialism for the problems of Africa, arguing that Africans “have not been the primacy or sole agents” for developments in the continent “for the better of four centuries” (p. 134). Siddharth Mallavarapu focuses on the Indian Ocean and tries to conceptualize “rule” within South Asia. His argument is that multiple and overlapping identities and sovereignty has much more importance in South Asia than the Westphalian concept of nation (p. 140). Fernando Lopez-Alvez successfully contextualizes the role of the “state” in Latin America claiming that the “nation” has been constructed by the “state”. Therefore, it has a premium place in the minds of people; even liberals do not question the role of the state in the continent (pp. 173-174).

The third section is devoted to “Globalization” and how it has been understood in different parts of the world. Isaac Kamola critically analyzes the place of Africa in western globalization literature. According to him, “globalization is in fact produced in relation to Africa’s absence”, rather than inclusion (p. 183), and this “should be read as a symptom of the fundamental inequalities concerning who is materially positioned to produce knowledge about globalization” (p. 199). Andrei Tysgankov, in his article on the Russian perspective of globalization, argues that the Russian understanding has been more critical and defensive compared to western scholars’ approaches, mostly due to negative experiences in the past (p. 218). Wafaa Hasan and Bessma Momani take on Arab scholars and their understanding of globalization. They discuss the difficulties for academics in the Middle East and say that people’s approach to globalization is very complex and depends on their background.

The fourth section takes up the issues of “Secularism and Religion”. While Ahmad F.A. Hamid portrays the role of religion in Indonesia and Malaysia, and explains how a peaceful co-existence become a reality, Mona K. Sheikh and Ole Wæver re-define western secularism in societal settings and argue that a particular configuration of secularism in every state may also structure the relationship between the social sciences and religion, and thus academic variations (p. 292). Therefore, detecting and defining variations in western (and other) secularisms may help us better analyze the role of religion in IR.
The last section deals with the issue of “The International” or different approaches to, and understandings of, what is international. Karen Smith contextualizes the concept of ubuntu in Southern Africa and argues that it may explain some of the foreign policy decisions of South Africa much better than western concepts. Ayesha Khan describes the struggle of a privately-funded research center in Karachi in its endeavor to shape knowledge about “local” and “international” in a highly securitized area. She believes that eventually their efforts will pay off as local government and international agencies have started to consider their “production” as a base for policies.

The book is good in a sense that one can get a glimpse of how western IR concepts have been understood and conceived of outside of the west. But does that really contribute to possible non-western IR theory building? The short answer is that it is open to debate. The chapters seem to focus more on how western concepts have been interpreted under local experiences (for example, in the chapters by Bilgin, Hamid, etc); or on how western concepts have been understood by local academics; or on how the non-western world has been interpreted by the west (for example in the chapters by Grovogui, Kamola, Hasan, etc). While this represents a breakthrough in terms of debate in the west as there has been a huge lack of literature, it is interesting that the non-western IR theory building has been debated using western terminologies. If our experiences and terminology create our own prison in terms of the boundaries of our thinking, how can a “western” terminology or mindset create a non-western perspective?

The problem in non-western IR theory debates is with the nature and the scope of the debate itself. It is patronizing and dominating the debate in a very modernist way. Mostly it is westerners that are debating non-western theory building. They act as if “we can do it” or even create it “on behalf of you (those in the locals)”. This is another version of orientalism at its worst, or at best at least occupying the space (if not invading) of the debate, its formulation, terminology and concepts. Therefore, the contribution of this type of book should be debated and discussed with this in mind. When we consider that many westerners are shaping non-western IR theory debate, one can be doubtful whether it will make a breakthrough both in the west and the east in terms of expanding IR.

Despite its shortcomings, this book may provide a gateway for westerners to the non-western world; and open spaces for possible engagement between the west and beyond. It may also help for those who, in the non-western world, are trying to make sense of “local” developments. These characteristics alone make Thinking International Relations Differently a must-read for researchers interested in civilizational debates, non-western IR theory and globalization. 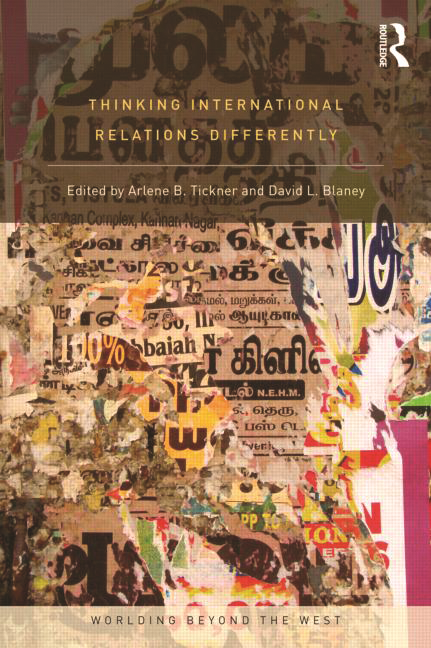