David Burrell’s Towards a Jewish-Christian-Muslim Theology explores key theological topics of the three Abrahamic faiths, insightfully depicting the way in which thinkers have struggled with similar issues over the centuries. Burrell is Professor Emeritus at Moreau Seminary, Notre Dame, Indiana, and has also taught for many years in Kampala, Uganda.

David Burrell’s Towards a Jewish-Christian-Muslim Theology explores key theological topics of the three Abrahamic faiths, insightfully depicting the way in which thinkers have struggled with similar issues over the centuries.  Burrell is Professor Emeritus at Moreau Seminary, Notre Dame, Indiana, and has also taught for many years in Kampala, Uganda.  He has written numerous books on philosophy and theology, as well as Christian-Muslim relations, and this book is probably his most important since a collection of his writings was published in 2004 (Faith and Freedom, Wiley and Sons).

Towards a Jewish-Christian-Muslim Theology is the output of a profound scholar who has devoted much of his life to the study and practice of the inter-religious encounter.  As a philosophic theologian, Burrell is at ease among Jewish, Christian and Muslim writings, especially from the medieval period.

This book demonstrates how much leading figures from the three faiths have learnt from, even been dependent upon, one another. Although Towards a Jewish-Christian-Muslim Theology is challenging to read because philosophical theology is not an easy subject, it is well worth the effort because it provides deep insights into the topic of faith itself.

In this latest work, Burrell uses the technique of 'creative hermeneutics’ to show how each faith struggles with similar complex questions, and how comparative inquiry illuminates those issues to the benefit of each.  The book, audacious in its breadth, devotes chapters to creation, freedom, grace, providence and the eschaton (Last Day).  Unsurprisingly, Burrell feels most at ease when writing about the classical medieval theologians such as Aquinas, al-Ghazali, and Maimonides.

Burrell moves smoothly from writing about one faith to another and shows how each can be mutually enlightening and corrective to the other.  He points to ways in which inter-religious conversations can expand and deepen theological understanding. Although much of the book is comparative in nature, in the final two chapters he does not avoid reflecting on the encounter between Judaism, Christianity, and Islam, exploring differences between the interpreters.  The book would have benefitted from less comparative analysis and greater consideration of the interaction between the three Abrahamic faiths.  Burrell challenges Christians, Muslims, and Jews to recognize that they share a common intellectual home and that each brings particular approaches to the human discourse about the one God.

This reviewer also enjoyed the personal dimensions of the book, which showed how the author came on an intellectual journey from a study of the life and work of Thomas Aquinas to interact with Islamic thinkers (such as Avicenna and Averroës) and a medieval Jewish scholar with whom he felt deep affinities, (Maimonides).  Burrell argues that Aquinas was himself a product of interfaith and intercultural achievement and suggests that he points the way forward for all religionists. He also recognizes that it is not possible to understand the Christian-Muslim interaction without exploring the Jewish contribution. Indeed, this is the basis for his proposed ‘creative hermeneutics.’

Burrell’s goal is for readers to appreciate how fruitful a comparative study of these three Abrahamic faiths can be. For example, he shows that Moses Maimonides’ composition, Guide for the Perplexed, was deeply influenced by Islamic thought and inspired Thomas Aquinas’ Summa Theologiae, once it was translated from Judaeo-Arabic into Latin.

Above all, Burrell seeks to contribute to alleviating an ignorance of Islam which, he suggests, has been the result of centuries of western inattention as well as suspicion.  Although he is willing to be critical of each of the Abrahamic Faiths, as a Christian he aims most of his prophetic critique to his co-religionists some of whom seek either ignore the sibling relationship with Judaism and Islam or to condemn it.

He asks adherents of each faith on the one hand to come to appreciate, as well as respect, one another’s faith and to engage in exchange and encounter about the One God, whilst on the other, to acknowledge that the Oneness is beyond human capacity to articulate.

He insists, rightly on my opinion, that adherents of each of the Abrahamic faiths take the two ‘siblings’ at least as seriously as Aquinas did in his lifetime.  He takes Judaism and Islam as seriously as he would wish Jews and Muslims to view Christianity. The interfaith encounter represents one of the most important challenges to humanity in the 21st century.  We are indebted to David Burrell for responding with honesty, insight, and depth. 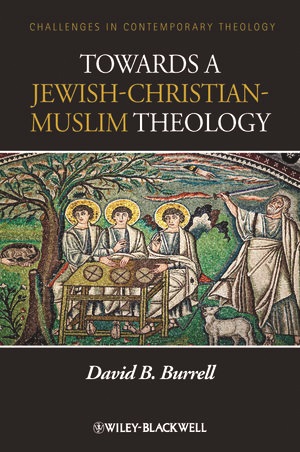