Turkey’s modernization and Westernization process, which started with ‘Tanzimat’ in 1839 with an overt ambition during the Ottoman period, cultivated an awareness of political liberalism in Turkish political culture. The central assertion in the book is that Turkey-EU relations have significantly affected progress toward the liberalization of Turkish political culture. Grigoriadis argues that Turkey’s democratic transformation entered into an ongoing and irreversible phase, especially after two critical decisions of the European Council: the Helsinki European Council decision of December 1999, when Turkey became a candidate for EU membership, and the decision of the Brussels European Council in December 2004, to begin negotiations on October 3, 2005. One of the major contributions of Grigoriadis’s book to the existing literature is to illustrate the steps Turkey has made toward the development of a ‘civic’ and ‘participant’ political culture, from a ‘subject’ model in this distinctive candidate country that has been waiting at the door of the EU for almost six decades.

Throughout the book, the author produces reasonable criteria for the diachronic, complex character of Turkish political culture. It constitutes an outline of many subjects in an informative sequence encompassing the most important moments in the political, social, and cultural history of Turkey. Regarding its presentation, the book is well-organized into seven chapters. The first two introductory chapters prepare the methodological and historical background of the study. Pointing out the definitions and classifications of parochial, subject, and political culture, Grigoriadis meticulously follows a comparative method and points out that a ‘participant’ model of political culture with the growing role of civil society has been progressively established in Turkey, although a ‘subject’ political culture still persists with the need for crucial improvements to continue on the way of democracy (pp. 14-20). The points he makes regarding the evidence on the presence of both subject and participant culture in Turkey are quite persuasive.

Within the scope and aim of the book, the author designedly supports his argument with three theories concerning European Integration: historical institutionalism, path dependence theory, and the two-level game model. In a comprehensive fashion, he combines these theories from different perspectives within four thematic areas –civil society, state-society relations, secularism, and national identity– by focusing on certain historical events and touching upon high issues of Turkish political culture, such as the Kurdish issue, political Islam, and the reconstruction of the Alevi identity that shaped the design of Turkey’s course toward democratization. This provides guidance for understanding the different dimensions of the debate on Turkish political culture, both before and after the establishment of the Republic of Turkey. In each thematic context, the book recalls the history of Ottoman political culture, and the politics in the history of republican Turkey since 1923 and after the 1990s respectively, thus enabling the reader to gain a better grasp of the political and social milieu as well as the sensitive events of these periods with clarity. In more concrete terms, the author gives a quick and compressed overview of the historical transformations and challenges that Turkish political culture has faced, such as the impact of the Ottoman political tradition on the founding of the modern Turkish nation-state, the Young Turk Revolution of 1908, initial liberal policies in republican Turkey, the coups of 1960, 1971, and 1980, and the influence of the EU-Turkey relationship in the course of its construction. Moreover, he analyzes the democracy and liberalism debate in Turkey with explicit references to the role of political parties, party leaders, politicians, military officials, nongovernmental organizations, other civil society organizations, and civil figures. Specific attention is devoted to the impact of the EU and Europeanization within each chapter’s context. Overall, chapters 3 through 6, which are dedicated to the above-mentioned specific thematic areas as the most controversial issues of the Republic of Turkey, are quite convincing. The combination of these topics is also placed in the concluding last chapter, which focuses on the prospects of Turkish political culture. At the end of the book, the author concludes by arguing how much the theories, by which he explained the evolution of the liberalization/modernization of Turkish political culture, merge towards the series of events of the transformation process.

Although it is certainly clear that there are still some areas that cause concern in any attempt to portray Turkey as a fully civic, participant, secular, democratic, and liberalized country, Grigoriadis’ words are indicative of his belief that a Muslim-populated state like Turkey will improve its ability in all these spheres through the successful management of the EU process. This presence of the author’s positive and hopeful manner for Turkey can be even seen in his words in one of his opening sentences: “Turkey’s success would weaken the argument that Islam and the Western liberal and democratic tradition are incompatible” (p. 5).

In terms of the content of the book, there are strengths and limitations. To begin with the strengths, it is an inquiring and densely written book that expands the readers’ understandings of both traditional and contemporary Turkish political culture in a detailed way. It offers a broad all-in-one resource of information for those who are lost in the puzzle of Turkish politics. The historical perspective allows the author to show the deep roots of the complicated structure of the phenomenon inherited from the Ottoman Empire. In this respect, the richness of the sources provides insightful reading. Grigoriadis also succeeds in making the reader aware of the problems embedded in the quasi-subject political culture of Turkey, and of the contributions that the EU has made toward the establishment of a participant model.

With regard to its limitations, as a very concentrated and enlightening book, a common problem is that the views of the author seem to be hidden in between the sentences where he does not share much of his own ideas, except in the last chapter where he mainly deals with theoretical considerations. Grigoriadis mostly expresses his views from the perspective of the EU, trying to rationalize the reforms and actions that have been undertaken by the European Commission and the Parliament. Although Grigoriadis undertook a very objective and engaging research on the existing bibliography from both external and internal sources, especially with specific reference to the Commission reports of the EU, no sufficient attempt appears to be made to offer a comprehensive criticism of the unsteadiness of Turkish political culture. And yet, specific attention in the book is mostly given to the weaknesses and problems on the subject matter, largely neglecting the positive developments throughout Turkey’s transformation process toward strengthening democracy. In addition, there are unnecessary repetitions throughout the book making it monotonous and wordy, although sometimes they are made deliberately for emphasis.

Overall, the book is a well-researched and very useful contribution on the roots of the problems of Turkish political culture, providing vast information. It will be of interest to academics, students, researchers, and anyone who aims to understand the development of Turkish democracy. 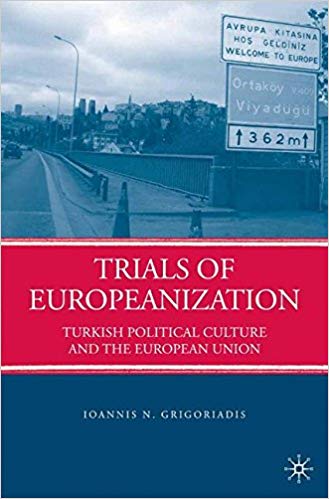 Representations and Othering in Discourse: The Construction of Turkey in the EU Context