Turkey, Kemalism and the Soviet Union: Problems of Modernization, Ideology and Interpretation

The work mainly focuses on the early period of the 1920s and the 1930s, which is essential for understanding Kemalism’s formation. The 1970s, which the author characterizes as a period of normalization between the USSR and Turkey, is not as well-researched. Nevertheless, overall this book is highly recommended for scholars in the fields of contemporary Turkish history and politics.

Kemalism, and the various ways of interpreting it, has long sparked intense debates over its role in Turkish history. For a long time, the study of Kemalism was dominated by concepts and approaches developed in Turkish and Western scholarship. However, despite its importance, no comprehensive work has been done on how Soviet academia, Communist party officials, and diplomats have perceived Kemalism. However, due to the Soviet regime’s eagerness to export the revolution to colonial and semi-colonial countries, many valuable sources from the Union of Soviet Socialist Republics (USSR) can deepen our understanding of Kemalism. Turkey, Kemalism and the Soviet Union, by Vahram Ter-Matevosyan, aims to fill this gap by integrating Soviet perspectives into the study of Kemalism. His research is based on analyses of relevant periodicals, official documents, interviews and memoirs. The author approaches Kemalism’s development chronologically and thematically. By engaging with Soviet sources, the book covers the significant events, processes, and ideologies that influenced Kemalism’s origin and evolution.

The book consists of an introduction, conclusion, and eight chapters. The first chapter examines various definitions of Kemalism and argues that there is no agreement among scholars regarding Kemalism’s terminology. The author demonstrates the influence of multiple factors on Kemalism’s origin and development and refrains from approaching this phenomenon within the framework of a unified political construct. He considers Kemalism as a particularly republican phenomenon that acquired its main features in the late Ottoman period. The author explicitly highlights the 1920s as the first attempt to conceptualize and integrate Kemalism into the existing modernization processes. Then, Kemalism became an uncontested political force whose supremacy was not challenged until the advent of the multiparty period. The study ends in the 1970s; Ter-Matevosyan asserts that since the 1970s Kemalism has appeared as “a structurally distinct construct” (p. 10). From this perspective, the Kemalism of the 1980s should be seen distinctively because of the internal discourses within Kemalism that were often conflicting with one another.

The second and third chapters focus on Kemalism’s formation and popularization. The author demonstrates how the Kemalist elite protected and popularized it by suppressing opposition, creating and continuously developing a cult of Atatürk, and finally establishing the dictatorship of the Republican People’s Party (RPP). By referring to Soviet sources, Ter-Matevosyan shows that the RPP could hardly be called a mass party. Its activity was minimal and affected only the urban population. Simultaneously, the government and the RPP’s structures merged, making the Party’s functionaries players in the government decision-making process.

The fourth chapter demonstrates the transformation of ‘Kemalisms’ from 1938 to 1960. The author emphasizes that previous researchers have not studied İsmet İnönü, who succeeded Atatürk, in much detail. Nevertheless, İnönü made several significant changes. He stopped the process of merging the government and the RPP’s structures and brought back the old opposition. Although the RPP was a dominant political force, it failed to use the legacy of Atatürk to its political advantage and lost the very first free elections in 1950. The Democrat Party that came to power retained outward adherence to Kemalism, but at the same time created a space for the revival of conservative forces.

The fifth chapter focuses on the development of Kemalism from 1960 to the 1970s. Here Ter-Matevosyan discusses a set of reforms implemented by the Turkish military to secure Kemalism’s role in society. One of the main tasks was to institutionalize military interventions in the political sphere while maintaining a multiparty model. Another challenge was to strengthen the role of the RPP by giving the bureaucracy and secular intellectuals more weight and influence in society. However, these measures did not increase the popularity of the RPP. The RPP’s further development is associated with Bülent Ecevit, who contributed to its drift toward the Left, strengthening its position ideologically. RPP’s reorientation undermined the alliance with the army since many authoritative RPP members left the party as a sign of disagreement with the new policy.

The sixth chapter discusses existing interpretations of Kemalism. The author criticizes observers who consider the development of Kemalism as a linear process. This reasoning implies that Atatürk’s companions initially knew what role Kemalism would play in society. Ter-Matevosyan demonstrates that even in the 1930s, at least six interpretations of Kemalism were known, and only Atatürk’s authority kept his supporters from splitting into rival factions. The author also demonstrates the lack of agreement among scholars regarding the ‘Key Principles of Kemalism,’ which initially had been written in the RPP’s program. By summarizing the analysis of previous scholarship, he shows that some principles, such as laicism, nationalism, and republicanism were known in Ottoman time. Therefore, their implementation was more or less successful. In contrast, the principles that were less-known, such as etatism, populism, and revolutionism, added a certain ambiguity to the attempts to instrumentalize those principles.

The book’s most original contribution comes in the last two chapters, where Ter-Matevosyan shifts to Soviet perceptions. By demonstrating the differences between early and later approaches to Kemalism, the author shows the dynamics that shaped Soviet interest in Kemalism. The Bolsheviks perceived the Kemalist revolution as a potential model for colonial and semi-colonial countries. Until 1927, Soviet observers closely studied the Kemalist model and were highly sympathetic toward it. Three main factors contributed to the reconsideration of their perspectives that led to a highly negative perspective of Turkey. First among them was Stalin’s consolidation of power. Unlike some other Communists, for instance, Nikolay Bukharin, Stalin was very critical of Kemalism and perceived it as an agent of the bourgeoisie. Second, the emergence of the Marxist approach in academia led to the marginalization of imperial Turkology and the unification of discourses regarding Kemalism. Third were the accusations against Turkey of promoting ‘Pan-Turkism’ among the Soviet Turks. The relationship between the two countries returned to normal only during Nikita Khruschev’s leadership, when Soviet observers expected an even greater turn toward the USSR due to the RPP’s orientation toward the Left.

Ter-Matevosyan’s Turkey, Kemalism, and the Soviet Union is a comprehensive analysis of Kemalism that provides a fresh outlook and fills a gap in our understanding of Kemalism’s genesis and development by integrating the Soviet perspective. The work mainly focuses on the early period of the 1920s and the 1930s, which is essential for understanding Kemalism’s formation. The 1970s, which the author characterizes as a period of normalization between the USSR and Turkey, is not as well-researched. Nevertheless, overall this book is highly recommended for scholars in the fields of contemporary Turkish history and politics. 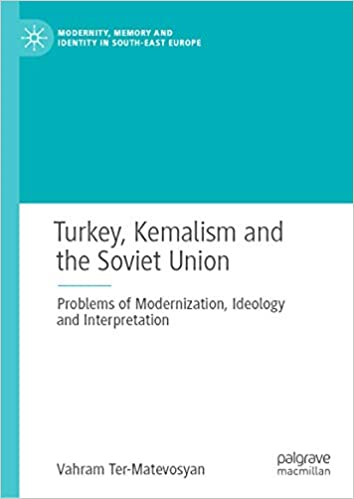