Turkey’s European Future: Behind the Scenes of America’s Influence on EU-Turkey Relations

In three ways, Tocci’s research warrants special praise. First, she does not treat the EU and the United States as monolithic entities, but unpacks them and examines the actors that have different views on Turkey, their interests, and potential influence on Turkish-EU relations. In chapter 2, she identifies American stakeholders as state actors, such as the Department of State, the Department of Defense and Congress, and various business groups, think tanks, and lobbies. Except for Congress at certain intervals and some of the non-governmental organizations, most of the actors in the US view Turkey and Turkish-EU relations from a geostrategic perspective, resulting in the use of metaphors such as Turkey as a buffer, bridge, model or independent country. This geostrategic emphasis, however, strikes a chord only in a limited number of European actors. As Tocci shows in chapter 3, the European stakeholders have different areas of concern, which are reflected in more diversified debates on Turkey than in the US. This same chapter tackles Turkish membership to the EU, a multifaceted issue. Here, Tocci summarizes how various institutions of the EU and member states, as well as political parties, businesses, NGOs, media, churches, and various diaspora communities position themselves on the question of Turkish membership. Only a limited number of European state institutions and civil society actors concentrate on geostrategic and foreign policy facets of Turkish-EU relations. Furthermore, only those actors upon which the US has direct influence look at the relationship through that lens. Indeed, looking at the direct influence of the US via EU actors that have overlapping interests with the American stakeholders might give the impression that the US has a limited effect on EU perceptions regarding Turkey.

However, the second characteristic of Tocci’s analysis is her efforts to investigate not only the direct mechanisms, but also the indirect effects of the US on Turkey-EU relations. This approach must be applauded. Thus, in chapter 5, Tocci examines the role of Turkish-American relations on Turkey-EU relations. An important finding is how Turkey’s adoption of the originally American “bridge” or “model” metaphors backfired. Tocci demonstrates that among European circles Turkey is perceived as an Islamic country; different in its culture and politics than the EU members. Moreover, when Turkey defines itself as a link between the East and West and as an example for the Middle East, this gives the impression that Turkey is expecting special treatment from the EU because of its geostrategic significance. As Tocci shows in Chapter 6, American foreign policy in Turkey’s neighborhood in general and especially in the Middle East has damaged Turkish membership efforts. Among European actors, who prioritize energy concerns, American foreign policy in the post-communist space in the 2000s and positioning Turkey as an energy bridge reinforced Turkey as an asset for the EU. This positive impact of the US, however, was limited to only a few Turkey-backers in the EU and combined with the negative side effects of US policy in the southern neighborhood of Turkey, it is clear that American influence in the region overall did more damage than good to perceptions of Turkey in Europe.

It is the third finding of Turkey’s European Future that is perhaps the most interesting. Tocci does not automatically assume that the US would only have a positive impact on Turkey-EU relations, but in a commendable endeavor examines the negative influence of the US as well. Tocci concludes that “…American influence is not clear-cut. It is neither always present/absent nor always positive/negative” (p.161). But, it is clear from her account that since the 2000s, the American impact on EU-Turkey relations has been unintentionally more harmful than it was in the 1990s. The only positive influence in the last decade was the push the US gave to Turkish reforms on the Kurdish issue, the Cyprus peace process, and the Armenian normalization. However, in the Cyprus conflict, the decision of the Turkish government to support the Annan plan was also due to the eventual membership of Cyprus to the EU and the stalemate this would bring after 2004. Even though the US might have had more direct influence over commencing the Turkish-Armenian dialogue, it is undeniable that the “implicit lever” of the US (that is “the pending House votes on the recognition of the Armenian genocide” (p. 123)), has also been an important leverage in the hands of European actors, most notably in France. On the flip side to the US’ policy positions towards Turkey and its impact on the EU’s positions on Turkish issues, although the US has supported Turkey’s efforts in finding solutions to its problems with the Kurdish population living in Turkey and in neighboring countries, without domestic and EU incentives, American efforts would not have been enough. Besides, in all three issues, as Tocci argues, conflicts have not yet been resolved in a way that would considerably boost Turkish-EU relations. Thus, the positive impact of the US on the Kurdish, Cyprus, and Armenian issues is questionable and when the 2000s are considered altogether, it becomes certain that the negative impact of the US has increased.

Although this thought-provoking finding that the US inadvertently did more harm than good in Turkey-EU relations in the last decade could have been highlighted more in the conclusion of the book, Turkey’s European Future is an admirable attempt in analyzing a rather complex issue. With her intensive use of personal interviews and conversations with American and European specialists, Tocci authored an innovative book that could become an indispensable source for those who are interested in understanding the US-EU Turkey triangle. The entire book, but especially the third chapter that identifies European actors with different perceptions on Turkey, balances detail with compactness and as such can be easily assigned to undergraduate students. 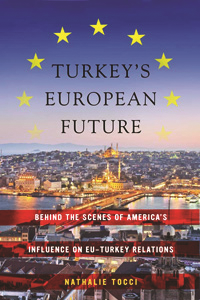