The European Commission, once asserted that “even before Bulgaria and Romania joined the Union, Turkey and Croatia, had begun joining the EU. Negotiations with Croatia may be concluded within a few years, while those with Turkey are expected to take considerably longer.”[1] Yet the crux of the matter is that Turkey’s full membership negotiation in the EU was not fruitful over the previous four decades.

The European Commission, once asserted that “even before Bulgaria and Romania joined the Union, Turkey and Croatia, had begun joining the EU. Negotiations with Croatia may be concluded within a few years, while those with Turkey are expected to take considerably longer.”[1] Yet the crux of the matter is that Turkey’s full membership negotiation in the EU was not fruitful over the previous four decades. Debates over Turkey’s full membership in the European Union (EU) have been gaining salience not only as a matter of scholarly interest in Europe but also as a major issue in Turkey.
Akçapar’s book sets out to examine the optimal future of the EU membership process for Turkey. The book seeks to address the wide dimensions of the relationships between Turkey, Europe, and the United States (US). The major hypothesis that gives substance to the book is to engender the policies for Turkey, Europe, the US, and the neighbours of Europe. Akçapar’s book aims to fill the gap between the EU and Turkey’s full membership perceptions. His purpose is to study and analyze from various perspectives the benefits of Turkey’s membership in the EU. In terms of Turkey’s full membership in the EU, however, Akçapar seeks to elucidate a pivotal argument convincingly perceiving his book as an account of a case study for Turkey joining the EU as a full member. Indeed, as Akçapar claims in the first chapter, while Turkey has maintained its focus on full membership in the EU, the successive EU decision makers barred tangible progress to that effect. Similarly, it is argued that a breakthrough was achieved in December 1999, when the Helsinki Summit officially recognized Turkey without any precondition as an accession candidate on an equal footing with the other candidate states. (p. 35) Proceeding from the European future of Turkey the author points out to numerous reports in the second chapter that may have influenced the EU’s thinking on Turkey’s membership in the EU. The reports represent that Turkey’s membership aspirations are widely seen as a threat to the EU’s integration. However, Turkey is an astonishing opportunity for the EU. In the central chapters, Akçapar turns to the EU integration, and the asymmetrical policies between the EU and the US on international issues, such as the 2003 Iraqi invasion.
The main innovative contribution of the book in Chapter Five is its attempt to understand the question of whether Turkey should be more or less engaged in its neighborhood (Lebanon, Iraq and Syria), which has yet to be fully resolved. Probably one of the reasons for the tendency to explain the regional role of Turkey is that the Europeanization of the foreign and security policy of Turkey can no longer be dissociated from the imperative to engage in the surrounding region. (p. 112) In order to substantiate the nature of the US‒Turkey relationship, the author argues that the US and Turkey have been longstanding allies and partners. One interesting point, which emerges from this analysis, is the importance that Turkey holds for the US and equally for the EU is not contested. However, the debate about Turkey’s eventual membership in the EU is far from over (p. 163) and the negotiations involve an intricate process. The chief conclusions emerge that first, by opening the accession negotiation of the EU with Turkey, a dreaded EU “Superstate” does not emerge. Second, Turkish membership becomes meaningful wherein the EU had been seeking a more integrated foreign and security policy.
Akçapar is to be commended for embarking on a complicated and extensive subject. However, his study has several shortcomings. First, from an international relations theoretical point of view, the approach of the book is not sufficiently comprehensive. Moreover, theorizing European integration could be realized by applying the English School of international relations theory.[2] In addressing European integration, the English School views that primary institutions could bind the internal and external integration of Europe together. Therefore, primary institutions are the key to understanding the practices within Europe such as bilateral and multilateral relations with other players. Among the master primary institutions, diplomacy is pertinent in that context as the author accentuates the role of negotiation between Turkey and the EU. Second, a further weakness is the lack of a clear methodology. Due to the key role that language plays in negotiation, narrative analysis could probably be adopted to study policy formation. Third, regarding the data collection in this book, the majority of data has been chosen from the existing literature while the current data on the European Commission could be a valuable source. Fourth, while Turkey’s membership in the EU is examined and that is expected to find new practices for the issue, Akçapar turns to the US‒ Turkish relationship as a comparison, but it could be argued that this is not within the parameters of this study. Fifth, Akcapar exaggerates the praise Turkey is receiving by regional public opinion due to Turkey’s increased activism in the region. (p.78) Although other solutions rather than the ones now adopted could have been part of the book, the book highlights the EU’s approach to the world outside its borders and the current developments of the European Neighborhood policy. In the particular case of Turkey, this book provides insightful information on what is going on both from the perspective of the EU and Turkey. Researchers examining Turkey’s current policies as well as those concerned with European studies, in general, should closely read this book. 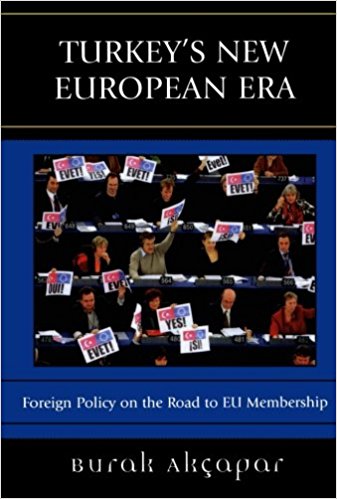