Turkey’s Security: New Threats, Indigenous Solutions and Overseas Stretch is remarkably thorough. Even readers completely unfamiliar with Türkiye’s historical and recent security issues, problems, deficiencies, and achievements would have a respectable grasp of these topics by the time they finish the book. The book makes a compelling argument that Türkiye faces formidable adversaries, so it should be more powerful, careful, and productive on its security issues, policies, and investments, and should diminish its dependence on foreign sources in the defense industry and apply security policies even more cleverly. I recommend this book to university students, academicians, and people who want to know Türkiye’s security issues comprehensively and encapsulated from several decades ago to today.

Turkey’s Security: New Threats, Indigenous Solutions, and Overseas Stretch, handles Türkiye’s security issues comprehensively from several decades ago to today. The book explains how and when various terrorist groups, including the Kurdistan Workers’ Party (PKK), People’s Defense Units (YPG), Democratic Union Party (PYD), The Fetullahist Terrorist Organization (FETÖ), and Islamic State of Iraq and Syria (ISIS) originated and how they have threatened Türkiye’s security from past to present. It also describes how Türkiye has attempted to cope with these terrorist threats and how it handles them today. The book also underlines how and why Türkiye changed its security policies over time and how it has securitized Syrian migrants. Foreign terrorist fighters and the PKK’s effects on Türkiye’s Middle East policies are also addressed in the book.

Turkey’s Security consists of six articles by different authors. The first article, written by İbrahim Karataş, addresses Syrian refugees in Türkiye from a security perspective. It briefly explains how Syrian migrants came to Türkiye to escape from war and that Türkiye dealt with the influx by securitizing their migration (p. 25). Since these migrants are still in Türkiye and may remain there indefinitely, their securitization will continue (p. 26). Also, since Türkiye has had to combat ISIS, PYD, YPG, and the Assad regime simultaneously, migration truly was a matter of security; due to the refugee influx, terrorism came to Turkish cities and hundreds of people were killed in suicide attacks. Türkiye undertook operations to prevent new waves of migration, as the already vast number of Syrian refugees living in Türkiye resulted in numerous social, political, economic, and security challenges. Karataş recounts how Türkiye established a directorate and constructed walls on its borders with Iran, Iraq, and Syria to tackle the problem (p. 26).

Karataş shares his recommendations on how Türkiye could have handled the issue when Syrians began to migrate and clarifies the kinds of precautions that Türkiye could have taken to prevent Syrian migrants from targeting Türkiye’s security. Although Karataş notes that Türkiye’s policy toward the migration of Syrians lost the government a portion of its supporters, he also argues that “its efforts for migrants are admirable” (pp. 25-26). Karataş’s thesis will strike a chord among the many readers who believe that Türkiye did the right thing by opening its doors to Syrians fleeing from war and death, but that it could have taken greater precautions by registering their names and requiring them to pass through security checks.

The third chapter discusses whether Türkiye’s overseas military bases and operations between 2010 and 2020 served Türkiye expansionist interests or regional peace. Here, Mustafa Öztop provides a list of Türkiye’s military bases in different countries and Türkiye’s participation in UN, NATO, and EU missions. He points out that by engaging in defense cooperation, Türkiye gained public attention from those living in the countries in which these operations took place, and contributed to ensuring stability, preventing conflict, and combating terrorism in places such as Somalia, Libya, and Azerbaijan (pp. 61-90). It is hard to argue in the absence of supporting evidence that Türkiye focused on oil or other underground sources where it has military existence (p. 62). On the contrary, Türkiye’s involvement in these locations is intended to secure its borders, fight against terrorism, and prevent immigration caused by conflicts or war (p. 62). Öztop also stresses the importance of unmanned aerial vehicles (UAVs) in successfully completing these operations, especially in Syria and Iraq (p. 87).

The fourth chapter briefly touches upon the coups that took place in Türkiye from the Ottoman era to the failed coup attempt in 2016. In this chapter, Erdem Eren explores the latter extensively and deeply, providing information about how FETÖ was founded, how it developed, how it spread to the world, and how the organization’s top-down structure was established. The author distinguishes the July 15 coup attempt from other coups in Turkish history, calling it “the bloodiest coup in the history of the state” (pp. 101-102). Whereas previous coups targeted the government, not the regime, the July 15 coup attempt targeted both (p. 121). Eren warns that the danger continues even though a majority of FETÖ members escaped Türkiye (p. 125). However, he stops short of offering recommendations about how Türkiye can protect its security from these kinds of organizations and prevent the occurrence of future coups or coup attempts.

In the fifth chapter, Ahmet Hüsrev Çelik and Şahin Çaylı explore the impact of the PKK on Türkiye’s Middle East policies, taking Iraq and Syria as two case studies. The authors remark that the PKK was supported by Syria, Iraq, and the U.S. (pp. 148-145) and that the U.S. does not accept the YPG as a terrorist group, although its terrorist activities and close relations with the PKK were obviously recognized. They also note that the U.S. has often provided monetary and military aid to the YPG (p. 154).

The sixth chapter explains how ISIS was founded and later improved, how it threatened Türkiye, and how Türkiye struggled with it and ultimately stopped the flow of foreign terrorists from Northern Syria to Türkiye. Here, Bayraktar compares ISIS with other terrorist organizations and says the difference is that ISIS has kidnapped Türkiye’s diplomats and attacked its army, civilians, airports, border posts, and tourist sites. ISIS has vowed to erode Türkiye’s security to achieve its “so-called Caliphate” (p. 181). Finally, however, Türkiye destroyed ISIS along with the foreign terrorists that threatened its security (p. 182).

Albeit brief, Turkey’s Security: New Threats, Indigenous Solutions and Overseas Stretch is remarkably thorough. Even readers completely unfamiliar with Türkiye’s historical and recent security issues, problems, deficiencies, and achievements would have a respectable grasp of these topics by the time they finish the book. The book makes a compelling argument that Türkiye faces formidable adversaries, so it should be more powerful, careful, and productive on its security issues, policies, and investments, and should diminish its dependence on foreign sources in the defense industry and apply security policies even more cleverly. I recommend this book to university students, academicians, and people who want to know Türkiye’s security issues comprehensively and encapsulated from several decades ago to today. 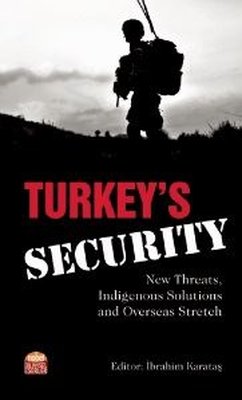 Turkey and the West after the Failed Coup: Beyond Suspicion?

A Necessary Void in International Relations: Non-State Actors in the Middle East