“Under Crescent and Cross: The Jews in the Middle Ages” by Mark Cohen is a useful work for those interested in the question of the status of Jews under Christian rule and Muslim rule in the Middle Ages. This book boldly attempts to analyze the history of Jewish-Christian and Jewish-Muslim relations and compare their similarities and differences over a period of nearly one thousand years.

“Under Crescent and Cross: The Jews in the Middle Ages” by Mark Cohen is a useful work for those interested in the question of the status of Jews under Christian rule and Muslim rule in the Middle Ages. This book boldly attempts to analyze the history of Jewish-Christian and Jewish-Muslim relations and compare their similarities and differences over a period of nearly one thousand years.

In his introduction, Mark Cohen explains the motivation behind the book by summarizing the historiography of Jews living under Muslim as well as Christian rule. He identifies two main perspectives on the Jewish experiences in the East and the West, both of which are responses to contemporary Jewish experiences in Christian Europe and the Middle East. The continued exclusion and persecution of European Jews in the 19th and 20th centuries, despite the European Enlightenment’s promises of tolerance and acceptance, led to the creation of a “lachrymose” conception of Jewish history in Christendom.

The author’s starting point is the status of Jews under Muslim rule and the conflicting perspectives on this issue, “the myth of the Islamic-Jewish interfaith utopia” and “the counter-myth of Islamic persecution of Jews.” The utopian myth of tolerance contributed to Jewish Orientalists and historians’ denouncement of the medieval Christian treatment of Jews and criticism of liberal Christian Europe. The same myth helped Arabs argue that Zionism shattered a utopia of Arab-Jewish harmony under Muslim rule. The counter-myth of Muslim persecution is sometimes claimed by some Jewish thinkers. This new myth has been described by Mark Cohen as “the neo-lachrymose conception of Jewish-Arab history.” (p.9) Cohen argues that both the creation of a lachrymose conception of Jewish history in Christendom and the neo-lachrymose conception of Jewish-Arab history “equally distort the past.” (xxi) So, he proposes “a comparative approach” to understand why “the Islamic-Jewish relationship bred so much less violence and persecution than relations between Christians and Jews. (xxi) By using the imagery of the “crescent and cross,” Mark Cohen outlines his comparative framework for investigating the situation of Jews living within the Muslim and Christian civilizations. Cohen’s approach operates by applying two models to the Jews; one of inclusion and the other of exclusion. The author studies the different aspects of the living conditions of Jews under either Islamic or Christian rule to explain which model applies to the case at hand. He analyzes the theological assumptions, juridical, economic, social, and political circumstances as well as the irrational convictions about the “Jewish Question.” He substantiates his claims by finding written evidence to support the distinction between the two civilizations. This evidence supports his thesis that the Islamic world had a more ‘civilized’ and inclusive (in Cohen’s terms ‘pluralistic’) approach to the ‘other’ guaranteed by “Shari’a,” while the Christian world and the Church excluded Jews from legal protection.

By contrasting Islam versus Christianity in their more or less divinely ordained approach to the ‘other,’ Cohen demonstrates mechanisms operating within “dar al-islam” as well as Christendom of Northern Europe. Although the aim of Cohen’s comparative method was to demythologize the narrative of a utopian state of tolerance that the non-Muslims enjoyed under the Islamic rule as well as its counter-myth of the persecuted unbelievers living in Muslim lands, the author seems to focus more on the analysis of the Jewish status as an “outcast” in the land of the Cross.

Since the beginning of Islam, Jews were viewed as being immersed within a divinely ordained social, economic, political, and religious system. The Muslim idea was to include non-Muslims in the name of peace. For Islam, the price the Jews had to pay for protection was their subordination to Muslim law and accepting the lowest social status within the framework of a peaceful Islamic order. However, within Christendom, the Jews were positioned outside the protective boundaries of religious and secular law. The main argument of the less “civilized” approach applied to the Jews within the domain of Christendom was based on the lack of clearly stated and divinely ordained rules toward the Jews. Thus, positioning them outside of the protection of regular law exposed them to the arbitrary decisions of unpredictable rulers. To make the contrast sharper, the Islamic “peaceful strategy” has been compared to the Ashkenazi status, as they were considered ‘outsiders’ along with ‘pagans, unbelievers, heretics, and lepers.’

According to the author, Islam solved the “Jewish problem” in a more “civilized” way, as the Jews were discriminated against by Muslims only if they violated the divinely sanctioned social order. As Cohen writes, “Unlike Christendom, which solved its Jewish problem in the later Middle Ages by anti Semitic excesses of murder, forced conversion, or expulsion, none of these violent ‘solutions’ to the ‘Jewish problem’ were employed in the Islamic world. Islam continued to accept the Jews as an embedded and organic element of society even as the general climate of well-being and security of the earlier period waned.” (p.282) Such a state of idyllic affairs lingered until the rise of Zionism, and Arab/Muslim objection to the establishment of the State of Israel. According to Cohen, the Muslim “solution” applied to the Jewish populations in Muslim lands contributed to the utopian myth of a peaceful land where the Jews found protection, while the exclusion paradigm applied within the framework of Christendom contributed to the Jewish stereotype. The fact that the Jews in Europe were protected by neither religious nor secular law was taken as evidence to contrast with the Muslim peaceful and just order. The image of the Jew-as-an-alien or the Jew-as-a-leper originated from the domain of Christendom. Cohen underlines that in Christendom, the Jews found themselves trapped between the direct control of a secular ruler and religious superstition imposed on them by Church officials. In Europe, Jews were excluded not only from the body of the Church but also from society, culture, and economy living in segregated quarters.

In Muslim countries, the physical appearance of Jewish people and their cultural assimilation allowed them to live out their daily lives in less restricted surroundings. There was no prohibition for public bathing (except for Fridays), intermarriages, or local and international commerce. In the Muslim world, public life was carried out in two main spaces, the mosque and the market, the latter space was open to Jews. Unlike in Christendom, there was opportunity for theological debates. According to the author, non-formal relations between the communities in daily life were due to the informal nature of the Islamic social order.

The main conclusion of the discussion on the “peaceful coexistence under the Muslim protection” myth was that the Muslim paradigm was more “civilized.” According to the author, such a myth lingered until the rise of Zionism, the excess and fanaticism of fascism, and the Arab/Muslim objection to the establishment of the State of Israel. By explaining that the origins of the myth of Muslim non-violence against Jews was based on the ideal of inclusion of the Jews within a diverse divine community, although remaining in a subordinated position in the Islamic world, Cohen contributes to a clearer understanding of why in Christendom, Jewish people were socially excluded, theologically stigmatized, and physically expelled or restricted to certain residential quarters.

However, both in the Islamic and the Christian world, both domains asserted their superiority over the Jews living in their respective lands. Nevertheless, Islam recognized that other religions should be protected as long as they submitted to the Islamic ideal of peaceful coexistence. The Ashkenazi and Sephardic Jewish communities are two distinct groups of Jews because they lived in two distinct civilizations, but both were submissive actors. The Sephardic Jewish community resided under a Muslim world of ‘tolerance’ while the Ashkenazi Jewish community lived in a Christian world of ‘intolerance.’ As Mark Cohen writes, “Jews defined themselves vis-à-vis others just as others defined themselves vis-à-vis the Jews,” yet the Jewish voice seems to be silent within both narratives narratives.

The determination of the rational of where the “other” fits into either the Islamic or Christian social order is decisive in this book’s inquiry and, according to the author, reveals that the more inclusive Islamic world was also more ‘civilized’ in its treatment of the “other.” In such terms, Cohen’s analysis contributes to a better understanding of the contemporary interreligious impasse between the three main universal religious. 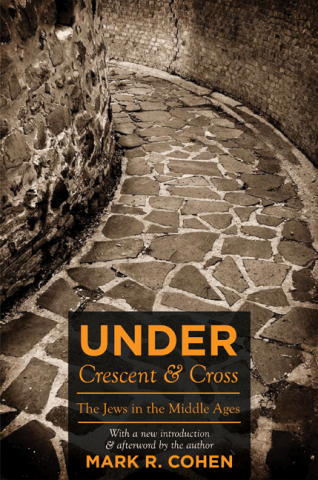