World Politics: International Relations and Globalization in the 21st Century

Navigating through the exciting and complex realms of global politics, the book begins by providing basic information about what international relations means in the context of globalization. This has remained one of the most discussed themes of international politics over the previous two decades. World Politics talks, with certain precision, about the development of international society, often reflecting on the need for such a system to maintain global peace and equilibrium.

Navigating through the exciting and complex realms of global politics, the book begins by providing basic information about what international relations means in the context of globalization. This has remained one of the most discussed themes of international politics over the previous two decades. World Politics talks, with certain precision, about the development of international society, often reflecting on the need for such a system to maintain global peace and equilibrium.

To advance the argument, the second part of the book –the history of global and international relations– provides a necessary context for the development of international relations. Subdivided into three parts, the book aims to explain the global political developments that emerged from the Second World War. This chapter also talks about the Cold War era and the subsequent irrelevance of bipolarity in world politics. This section briefly discusses European nationalism and imperialism. Unfortunately, it merges religion and nationalism, where religious-nationalism “derives political legitimacy from religious and not secular doctrine” (p. 41). But to frame Iran, Saudi Arabia and ISIS in the same political frame is unfair.

The most important section of the book is the third part, which gives a basic understanding of all the significant theories of international relations. Although it does not delve in detail into these theories, it does make a significant attempt to relate these theories to contemporary global political scenarios.

For Realists, the volume argues, no government can ‘enforce laws’ in world politics (p. 95); the idea of ‘national interest,’ thus, will always take priority over the dogma of international security. This means that every state ought to be capable of protecting itself, which, fundamentally, makes weak states vulnerable and insecure. But Liberalism, in its critique of Realism, evokes ‘utilitarianism’ (p. 104) which, as the book suggests, ‘ensures the greatest happiness of the greatest number’ (p. 105). However, the assumption that ‘human nature is cooperative’ (p. 110) is more utopian because, since the beginning of the new global order, not abiding by the global hegemon is portrayed as a ‘threat to global security.’ The following chapters –on Marxism, Neo-Liberalism, Critical Theory, Social Constructivism and Feminist theory build upon this debate to enlighten the reader about the academic shifts in the theory of international relations.

One of the crucial aspects in the study of international politics is to understand at least the basics of how and why the international structures came into being; part four of the book advances arguments in this regard. It talks about international organizations and international law, while giving due consideration to the emergence of transitional actors. Part five comprehensively compiles commentary and anecdotes on significant global issues like International Security Studies, International Political Economy, human rights, migration, nuclear deterrence, terrorism, and peace keeping. In its final part, “The Future,” the book imagines how rising powers like China and India might become a threat to the western dominance of the international political system. It talks about China’s ‘economic ascendency’ and its impact on the ‘geostrategic fortunes of individual states and regions globally’ (p. 449).

Most of the texts produced in the post-9/11 era take prejudice in favor of the modern liberal-democratic political order, and such is the case with this book. In its unstated assumptions, the book presumes that any system of governance other than the liberal-democratic political system –as manifested in the form of the existing international system– is a challenge to peace. This, naturally, means that the notion of peace is also to be developed by proponents of this order. Thus, if a society is happy being ruled by a certain social or cultural code, it is nonetheless described as a threat.

Facts and anecdotes –without a context– can be misleading. To argue that ‘international society’ is based on ‘shared norms and values’ (p. 28) ought to be seen as an attempt to wipe clean the blood from the hands of global powers –and their military alliances– which are behind most of the bloodshed that has happened during the past two decades. This, of course, is just a text book; but even a text, especially one as crucial as this, ought to maintain balance in devising its arguments. Any text that doesn’t consider arguments to counter balance is, necessarily, prejudiced. Because, before anything else, this is about the dissemination of information which, in the case of this book, occurs through a specific conscious pattern. Thus, there is always a possibility for bias to creep in; for example, demonizing ‘Muslim fundamentalism’ as ‘religious fanaticism’ without bothering to differentiate between the two; or considering ‘Asian values’ a threat to notions of ‘neo-Liberalism’ (p. 32). This bias may not necessarily be intentional, but a discourse analysis explains how not giving context or background to facts can disseminate misinformation.

Since this is a basic text book, it falls short of making sufficient critical arguments in its exploration of the emergence of non-state actors. Without understanding the reason and context in which non-state actors have come into prominence, it would be unjust to pass remarks about any ‘non-state’ actor. When a powerful state wages war against the integrity of an individual, or a defenseless and weak state, the outright argument that denounces the reaction of a people suppressed by the powerful Other is travesty of rationality. The book, for example, talks about the emergence of ISIS and al-Qaeda and attributes violence to them. Violence is unjustified regardless of who commits it; but there ought to be a difference between offensive violence and defensive violence.

There is a significant commentary on topics ranging from liberalism to law, from history to human rights, and from terrorism to global notions of peace. Although the first edition of this book provided significant information about all of these topics, the second version includes topics about crucial areas like migration and feminist theory that makes it more comprehensive.

All of the authors of book have prestigious academic backgrounds. The book, published by Sage, gives a graphic view of related issues in between chapters in the form of ‘reflection boxes’ which invite debate over the relevant topics. It is easy to read and also offers suggestions via annotated readings which are very helpful in extended research. 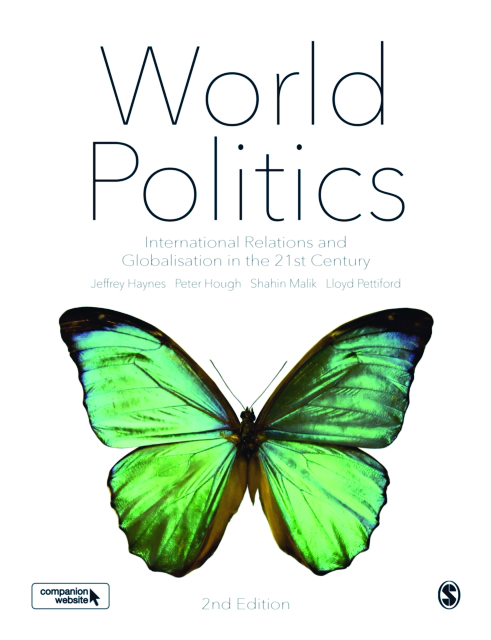