Following the publication of the Winter 2021 special issue, "Climate Change and Migration," Insight Turkey organized a panel attended by academics who are experts in the field and examined the issue in depth. 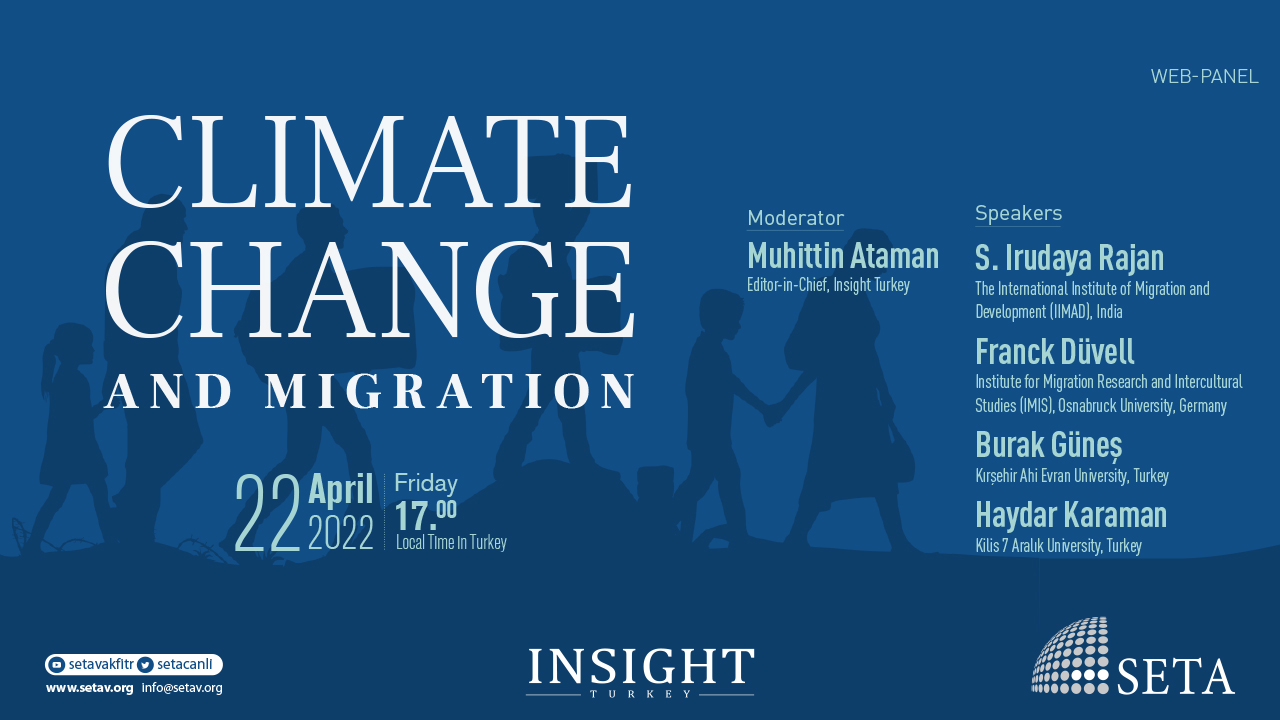 Irudaya Rajan starts his speech by comparing India and Kerala in terms of migration. He describes Keralian migration as a remittance based economy and claims that there is a huge gap of requirement of labor force in kerala because on one side kerala people are leaving, other side kerala population is aging. Therefore, according to Rajan, Kerala needs a huge demand for internal migrants. Rajan argues that there there is also some type of indifference treatment by the local people because when there is a scarcity of resources, there is some discrimination reported in Kerala's context. However, he notes that Kerala needs migrants from other states to replace the work or replace the economy or that Kerala wants to move forward in developing in creating economic growth. It requires migrants from other states. Hence, Kerala government has a lot of policies like for housing, education, children and insurance. Rajan alleges that Kerala is successful in managing indiana migrants.

Burak Güneş and Haydar Karaman’s presentation is mainly about whether the United Nations be a base to create an adequate legal framework for migration and climate policy at the global level naturally and what extent attempts by the United Nations to reduce the adverse effects of climate change and climate-induced problems could be panacea vis-a-vis the current formation of the United Nations Security Council and power struggle among the superpowers. While Karaman gives an insight relating to climate change and migration by taking the Haiti and United Nations as a case, Güneş touches upon the legal debates incorporated into this topic and in terms of international law, there are three important points that Güneş advert in his speech which are the status of refugees, the non-reformed principle, and the human rights perspective. They claim that the impacts of climate change would have ultimately resulted in the original state sovereignty  because the adverse effects of climate change will eventually force states to adopt new legal regulations relating to it no matter what whether the states are satisfied or not.

Franck Düvell’s speech is mainly about how Europe is dealing with the humanitarian crisis after the war in Ukraine. Düvell firstly gives information about the Ukrainian war then migration and lastly the integration to another crisis like the displacement in Syria. Düvell claims that so far by the war 12 million people have been displaced this is a third of the entire population and 5 million were displaced internationally while over 7 million people were displaced internally. It's indeed one of the largest and fastest processes of forced migration that we have seen in recent years. Comparing Syria and Ukraine due to their emigration due to the war, Düvell claims that there are similar reasons, such as historical links and geographical proximity between the EU’s hosting of Ukrainian immigrants and Turkey's hosting of Syrian immigrants. Düvell concludes his speech by explaining how this refugee crisis will affect the other refugees who are already in Europe.

Russia, Ukraine and the Eastern Partnership: From Common Neighborhood to Spheres of Influence?