The present volume Democratic Institutions and Authoritarian Rule in Southeast Europe by Danijela Dolenec adds another dimension to explain the democratic process in post-communist countries. Talking particularly about Albania, Croatia, Bulgaria, Macedonia, Romania and Serbia, the volume tries to answer the question why the democratization of Southeastern Europe has not developed at the same level as the countries of Central Eastern Europe after the break-up of the Soviet Union. The main questions the author tries to answer are: What are the reasons that the protection of the human rights and freedom remains the weakest link of democratization, and why do fragile rule of law systems and enveloping corruption remain the weakest link in this process? The book focuses on the dynamic of party competition influenced by violent conflicts and the process of European integration.

Chapter 2 deals theoretically with the process of democratization in Southeast Europe and analyses it through socio-economic parameters, regime legacies, the problem of statehood, the dynamics of political parties and the influence of the European Union in this region between the initial period of regime change 1989-1991 and the present period (1991-2012). The major obstacles to further democratization and the root causes of the lack of legitimacy across the region are the political abuse of power and the deeply unjust privatization process.

The theoretical dimension of Democratic Institutions and Authoritarian Rule in Southeast Europe discusses three prominent factors –the level of socioeconomic development, types of communist regimes and citizen’s value orientation– in the process of democratization. Dolenec further elaborates his analysis through indicators such as GDP, urban and rural population and literacy rate, life expectancy and communication. Based on the typology of socio-economic and state capacity, the author classifies three types of communist regimes: Patrimonial communism, National-Accommodative communism and Bureaucratic-authoritarian communism. The crux of this chapter lies in its detailed emphasis on citizen’s value orientations and civil liberty, interpersonal trust and cooperation as the core factors of democratic culture.

The domination of authoritarian parties over regime change is discussed via an index of political party competitiveness developed by Grzymala Busse and a modified version of O’Dwyer’s measures. The author argues that the party system constellation conditions the effect that party system competitiveness will have on democratization. This is explained through the concept of communist exit, fractionalization of the opposition, the two-turnover test, and the presence of party dominance (pp. 79-80). Dolenec explains why the influence of EU integration on democratization is different for Central Eastern Europe and Southeast Europe. Her book analyzes the conflict and war regime change process and its impact on the process of democratization.

Many domestic factors support the democratizing process, such as historical legacies, state building and war, and political party dynamics. The EU functions as an external democracy promoter in post-communist countries. The central argument of chapters 6 and 7 is that the weak rule of law is the root cause of the low-level equilibrium of democratization across Southeast Europe (chapter7). The author presents examples of Croatia and Serbia, where similar features persist, such as the personalization of power, followed by war and nationalist mobilization, the merging of economic and political power with the purpose of personal enrichment, the privatization process which led to the dissolution of resources and infrastructure, the politicization of the public sector, and an unreliable bureaucracy whose autocratic 1990s policies still affect post-2000 reforms.

The author argues that democracy cannot be engineered through smart design of formal institutions, since they have been continually destabilized by autocratic forces from the 1990s onward in post-communist countries. Democratization is possible by means of a gradual process of strengthening independent social spheres, citizens and associations, to control the abuse of power by the political elites of the region. The democratic institution is easily controlled by authoritarian forces if authoritarian parties have domination over regime change (pp. 195-196).

The volume provides a well-argued empirical study with an interesting research design, mixed methods and analysis. It contains a rich methodology and comparative approach to understanding how to approach democratization in all its abundance of content, how to compare post-communist countries in their similarity and diversity, and how to perform a comparative analysis of this complex issue. The author proves a strong and essential link between the domination of autocratic parties and problems in the establishment of the rule of law in the post-communist countries. The volume is a must-read for scholars, experts and practitioners working in the area of democracy and related issues. 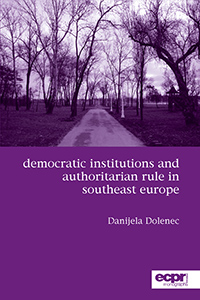