Exploring Emotions in Turkey-Iran Relations provides valuable historical and theoretical insights into Turkish-Iranian affairs, focusing on emotional and affective-normative norms. It also gives a detailed analysis of each country’s domestic factors and how domestic politics determined their bilateral affairs. In addition, the book examines the developments of domestic politics in each state.

As two regional powers and neighbors, the affairs of Turkey and Iran are intriguing. Their regional roles, perceptions of each other, and competition and collaboration have emerged as an interesting research area. Many scholars have sought to examine these neighbor states from both theoretical and non-theoretical positions. In Exploring Emotions in Turkey-Iran Relations: Affective Politics of Partnership and Rivalry, Mehmet Akif Kumral examines Turkish-Iranian affairs by utilizing an affective-normative and psycho-social perspective. In so doing, the author conceptualizes the emotional and affective ties between Turkey and Iran, providing a theoretically rich analysis of bilateral Turkish-Iranian relations.

The book has six chapters, including theoretical background, empirical analysis, and overall findings and recommendations. The first chapter provides a theoretical background and an introduction to Turkey-Iran relations by conceptualizing social psychology and the dyadic partnership and rivalry in the neighborhood affairs between the two states. According to Kumral, social psychology theories provide a clear understanding of historically complex Turkish-Iranian affairs, including both competition and cooperation (p. 36). Based on this theoretical chapter, the following chapters provide chronological, empirical investigations, divided into two historical parts, to examine the process of affective-normative changes in Turkish-Iranian affairs. The author opts to use a narrative approach in these chapters to provide a clear and objective description. Each chapter has an episodic summary to define the author’s findings and analysis.

In the second chapter, the focus shifts to bilateral affairs between Turkey and Iran from 1918 to 1945, shedding light on Turkish-Iranian relations between the two world wars. A critical aspect of these years is that both countries tried to consolidate their international political existence and power. The ‘contemporary character’ of their dyadic affairs emerged during this period. While adopting nationalist viewpoints in the post-war period, they engaged in ‘affective messages of friendship’ and ‘normative commitment’ to each other, despite the reciprocal mistrust arising from their Kurdish and Azeri minorities (pp. 73-79). Notably, Atatürk and Reza Shah were accepted as the ‘founding fathers of friendship.’ Based on their social-psychological partnership and mutual, external threat perception, the Saadabad Pact emerged as ‘a treaty of friendship and non-aggression’ in July 1937 (p. 110).

The third chapter covers the historical, affective-normative affairs of Turkey and Iran during the Cold War, pointing out that the Cold War resulted in a weak psycho-social affair between the two neighbors. This was “[l]argely due to differences in [their] geostrategic positions, levels of legal institutionalization, patterns of political development and economic growth, and possession of energy resources…” (p. 120). Notably, non-regional powers influenced Turkey and Iran’s bilateral relations. For instance, Ankara was concerned about the warming ties between Tehran and Moscow (p. 121). Throughout the Anglo-Iranian oil crisis, Ankara cooperated with Britain instead of Tehran (p. 177). Their respective domestic politics, including the transition to a multi-party system in Turkey and the Anglo-American-backed coup in Iran, helped to shape their dyadic ties; that is, both Turkey and Iran were mutually concerned about the developments in the domestic politics of the other. As a result, ‘distrust and envy’ emotions were more dominant than their positive interactions, such as the formulation of the Baghdad Pact in 1955.

In the fourth chapter, Kumral examines the social-psychological norms in bilateral ties between Turkey and Iran from 1980 to 2000. During this period, mutual security and geopolitical concerns, as well as domestic political shifts shaped their dyadic relationship. Turkey remained neutral toward the Iran-Iraq War and the Islamic Revolution in Iran, even though Ankara was concerned about the Islamic regime and the warming ties between Tehran and Kurdish groups. Therefore, their mutual economic and security interests predominated over their rivalry, and the two neighboring countries maintained affective-normative interactions (p. 206). Notably, during the Erbakan term in Turkey and the Khatami term in Iran, Turkish-Iranian affairs witnessed close psycho-social developments. As a result, complex emotions, involving ‘hate and hope, and anxiety and dignity,’ prevailed in their dyadic ties (p. 232).

The fifth chapter examines more recent physio-social affairs between Turkey and Iran, covering 2001-2018. Although sought collaboration till 2010, the Arab Uprisings brought competition between these neighbors. However, mutual economic interests and security concerns, as well as domestic issues, caused the continuation of the affective-normative atmosphere, despite their conflicts of interest in Iraq and Syria. For instance, Turkey has opted to cooperate with Tehran instead of its Western allies due to Turkey’s lack of trust toward its Western partners after the coup attempt in Turkey and U.S. support for Kurdish armed groups in Syria. Therefore, changeable emotional norms, including ‘fear-compassion and anger-honor,’ paved the way for partnership and competition between 2010-2018 (p. 294).

The last chapter summarizes the author’s findings and provides valuable suggestions for future work on Turkish-Iranian affairs. Kumral restates that he aims to define the psycho-social history of the Ankara-Tehran neighborhood and contribute with theoretical insights to the literature of emotional-affective phenomena in politics (p. 308). Four relational myths play a role in Kumral’s psycho-social analysis of the Turkish-Iran neighborhood: the Özsoy twin sons’ tale, the cold shoulders saga, the 1514 Çaldıran myth, and the 1639 Kasr-ı Şirin story. The tale of Özsoy’s twin sons represents ‘the golden 1934-1938 era of progressive engagement’ in bilateral Turkish-Iran affairs, emphasizing the two countries’ neighborliness. Similarly, the 1639 Kasr-ı Şirin story focuses on peace and partnership between Ankara and Tehran. On the other hand, the cold shoulders saga and the 1514 Çaldıran myth define the rivalry between the two and focus on negative emotional aspects and sectarianism. These myths demonstrate the ‘ambiguous social-psychological characteristics of relational partnership and rivalry’ between the two countries (p. 311). Kumral further predicts that “[b]ottom-up developments in non-governmental, public-to-public and face-to-face social interactions [will] help to improve the affective-normative politics of neighborhood between Turkey and Iran” (p. 322).

Overall, Exploring Emotions in Turkey-Iran Relations provides valuable historical and theoretical insights into Turkish-Iranian affairs, focusing on emotional and affective-normative norms. It also gives a detailed analysis of each country’s domestic factors and how domestic politics determined their bilateral affairs. In addition, the book examines the developments of domestic politics in each state. However, Kumral’s presentation of the Iranian perspective toward Turkey seems limited in contrast to the Turkish stance towards Iran. In this regard, the book’s knowledge-intensive approach could be extended through the addition of further Iranian viewpoints toward Turkey. Despite this imbalance, Exploring Emotions in Turkey-Iran Relations will become a seminal source for future studies on Turkey and Iran, providing an essential addition to the literature on Turkish-Iranian affairs, with its theoretical framework on emotions and affective norms. 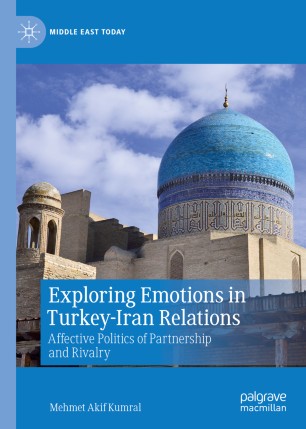 Civilizational Discourse, the ‘Alliance of Civilizations’ and Turkish Foreign Policy