Iran in World Politics: The Question of the Islamic Republic

Adib-Moghaddam’s engaging analysis of the Iranian politics is an effective antidote against the widespread characterizations of the Islamic Republic as the center of Shi‘i crescent and a regime ruled by messianic fanatics who are soon-to-be armed with nuclear weapons.

Adib-Moghaddam’s engaging analysis of the Iranian politics is an effective antidote against the widespread characterizations of the Islamic Republic as the center of Shi‘i crescent and a regime ruled by messianic fanatics who are soon-to-be armed with nuclear weapons. He explicitly states his purpose: “Ideally, this book equips you… with the necessary tools to widen and fill the gaps between lines next time you read a newspaper article about Iran” (p.2). “My idea in this book is to employ critical theory in order to place Iran out of the reach of their awesome propaganda” (p.3).

The book has six sections. The four sections offer case studies of the making of Iranian foreign policy, the Iran-Iraq War, and the anti-Iranian activities in the US, and the reform movement in Iran. The most ambitious section of the book is Part One where Adib-Moghaddam aims to present “insights into the ‘mindset’ of Iran’s foreign policy elite” (p. 25). He claims that the foreign policy culture of the Islamic Republic is permeated by a ’utopian-romantic’ meta narrative “formulated during the revolutionary years, and institutionalized as central norms of the Islamic Republic,” which “inform the contemporary grand strategic preferences of the Iranian state” (p. 35). The foreign policy culture “functions as the guardian of identity, represents a web of shared ideals, images, norms and institutions, and provides for the foreign policy elites a coherent, if systematically abstract, overall orientation in the conduct of international affairs” (p. 71). Adib-Moghaddam argues that this culture affects strategic preferences and behavior as a result of four-dimensional dialectic: “(1) it is through externalization that culture is a human product; (2) it is through objectification that culture becomes a reality sui generis; (3) it is through internalization that we are products of culture; and (4) it is through introjections that culture constitutes our identities, interests and preferences” (p.42).

Based on this theoretical discussion, he then argues how the “socialist, third-wordlist and revolutionary Islamic Zeigeist in the 1970s” (p.52) has become central to the post-revolutionary Iranian foreign policy. The revolutionary elite strongly believe that prevailing international law, institutions, and norms are based on hypocrisy and seek to perpetuate the hegemony of dominant powers. This cultural framework, which entails pro-Palestinian sentiments, anti-Zionism, anti-Imperialism, and Islamic communitarianism, facilitated the storm the US Embassy in November 1979 (pp. 59-62) and underlined Khomeini’s fatwa against Salman Rushdie in 1989 (p. 63). It also explains the Islamic Republic’s withdrawal from the CENTO, prolonged war with Iraq, support for the PLO, sympathy with Latin American leftist movements, decision to end its relationship with South Africa, and continuing hostility toward the US policies (p. 67). At the same time, Adib-Moghaddam claims, this cultural framework prioritizes “the preservation of the post-revolutionary, Islamic character of the Iranian system and the projection of Iranian power both regionally and domestically” (p. 74). Hence, “from the perspective of contemporary Iranian decision makers there appears to be no contradiction between the utopian-romantic Leitmotif of the revolution and multilateral engagement and détente” (p. 70). According to Adib-Moghaddam, revolutionary did not really betray their ideals, when they arranged arms deal with the US and Israel during the war with Iraq, backed the US invasion of Afghanistan, kept silent when Russians brutally suppressed Chechen resistance and China crashed Muslim opposition in its western provinces, and did not oppose the US invasion of Iraq. These actions all exemplify “instances when diplomacy and the anarchic spaces of world politics are/ were exploited in support of Iran’s grand strategic preferences” (p. 74).

There are several problems with Adib-Moghaddam’s discussion of Iranian foreign policy. The first one is methodological: his thesis is basically unsubstantiated because he neither conducted interviews with the decision-makers nor analyzed internal debates taking place among the elite. It remains unclear whether Iranian foreign policy elite, based in seven different institutions, share a cognitive consensus that prioritizes certain types of behavior and marginalize alternative options. He actually concedes this point when he says, “How deterministic is culture in setting grand strategic preferences? The method explored here suggests that it is difficult to discern a priori…this needs to be investigated in conjunction with empirical analysis” (p. 80). Yet this concession undermines his main objective of understanding “the way Iranian foreign policy elites perceive the outside world” (p. 34). The second issue concerns the way in which how culture shapes preferences and behavior. From Adib-Moghaddam’s narrative, one gets the impression that foreign policy elite are prisoners of their cultural outlooks. He does not systematically discuss how this culture sustains and reform itself, and eliminate or cultivate dissident opinions. Finally, Adib-Moghaddam’s articulation of culture is too broad and all-encompassing to provide much analytical utility to understand how preferences are formed and decisions are made. If “Iran’s current strategic preferences” does not “represent a break from the ideals of the revolution” (p. 72), as he claims, then every decision made by elite is justifiable within the boundaries of the revolutionary heritage. A simple realist account that prioritizes state interests would reach the same conclusion.

Part Two offers a convincing and empirically rich account of how the Iran-Iraq war was avoidable. “[W]ithout the invention of Ba’thist Arab nationalism and its anti-Iranian precepts; without its institutionalization and reification as Iraq’s preferred state identity during Saddam Hussein’s rule; without its internationalization by the Ba’thist elites; and without the implicit objectification of this invented garrison state identity by the international community before and during the conflict, the Iran-Iraq war would not have ‘happened’” (p. 116). Part Three is a sharp critique of the activities of the US neoconservatives who “will continuously and rather relentlessly exert pressure to derail any type of diplomatic engagement between” the US and Iran (p. 153). At the same time, Adib-Moghaddam does not offer any insights regarding how the neoconservative ideology has become that powerful and whether it is able to sustain its influence with the change in the US government. Part Four discusses the reformist Iranian civil society and “its achievements vis-à-vis the state” (p. 160). One obvious shortcoming of this chapter is its reliance of a rigid state-society dichotomy that ignores the realms of interaction and cooperation among state and society actors.

In its conclusion, Adib-Moghaddam writes, “[t]his book will have been successful in arguing that any reduction of Iran along a set of easily digestible propositions has a political purpose (pp. 188-9). One can say that it is only partially successful as Adib-Moghaddam is not immune from the habit of reducing Iran to a single argument. He claims that the Iranian Revolution “granted Iranians the absolute right to rise up and criticize those who exercise worldly power and claim transcendental authority at the sam e time” (p. 169). Hence he tends to offer his particularistic reading of the lasting legacy of the revolution and denies its inherently pluralistic and highly contested meanings. 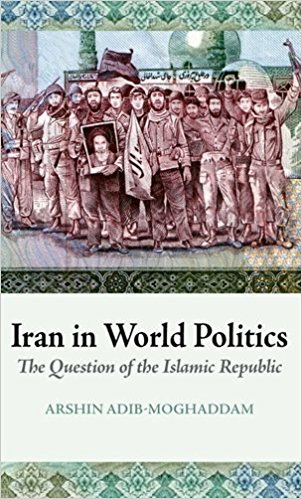