Rowhani’s Election: Promise of Change or More of the Same?

Rowhani’s victory in Iran’s 2013 presidential election is a clear protest vote against his predecessor’s management of the country’s relations with the Western world. Although Rowhani’s support for broader social freedoms, as well as his advocacy for women’s rights rendered him a favorite candidate for change, undoubtedly economic insecurity — caused by the imposition of sanctions by the Western world in reaction to Iran’s nuclear program — was a key factor in his victory. Since Rowhani is ultimately beholden to the Supreme Leader, the question persists: Does the election of yet another reformist generate false hope or genuine hope? We will have to wait and see if Rowhani’s presidency can provide the perspective necessary for breaking away from the futile approach of the past. 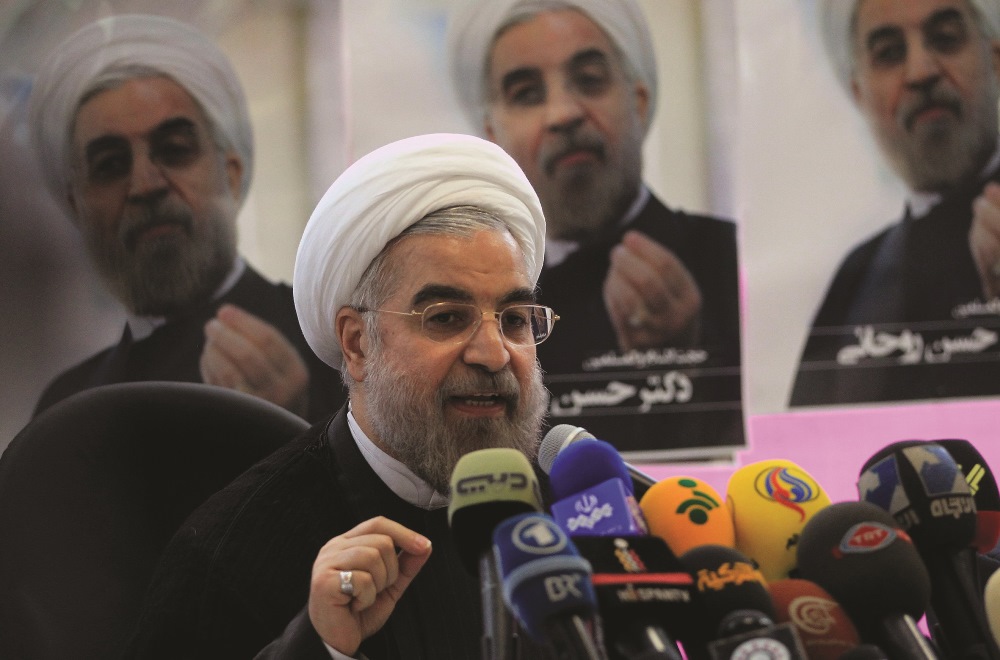 Hassan Rowhani marshaled a stunning victory in Iran’s June 14 presidential election, in which nearly 36.7 million Iranians participated — roughly 72 percent of eligible voters. Rowhani managed to secure 18 million votes, approximately 51 percent of all votes cast. The only cleric out of the six presidential candidates, Rowhani’s victory is a clear signal of protest against the Ahmadinejad administration’s management of Iran’s relations with the Western world, including issues over nuclear policies. He secured an overwhelming victory thanks to the votes of reformists and moderates. Although the last-minute endorsement by former presidents Rafsanjani and Khatami, both known for their reformist agendas, proved crucial to Rowhani’s victory, many experts believe this was a victory of a pragmatist and activist model of opposition politics in Iran. Rowhani’s support for broader social freedoms, his criticism of the securitization wi wthin Iran, and his strong advocacy for women’s rights rendered him a favorite candidate for change. However, there is no denying that economic insecurity — largely caused by the imposition of sanctions by the West in reaction to Iran’s nuclear program — was a key factor in his victory. Rowhani built his campaign around the mantra of moderation, with an underlying message of regional détente and open dialogue with the West. Rowhani appears intent on repairing lingering rifts with regional Arab governments and Turkey, reversing the trend toward self-imposed isolation.

A quintessential regime insider, he fully comprehends all the inner workings of Iranian governing institutions. His pragmatic style is likely to sideline radical thinking and rigid ideological posturing

Improving relations with Saudi Arabia holds significant implications for several unstable areas in the region, especially in Afghanistan, Iraq and Syria. Having become the site of a sort of proxy war, Syria has been turned into the most perilous arena for competition between Sauid Arabia and Iran. During the election campaign, Rowhani frequently noted that Iran should engage in serious negotiations with the Western world, while underscoring the primacy of national interest by arguing that Iran should prioritize the country’s economy and well-being of its people above its nuclear program.

Born in 1948 near the northeast province of Semnan, Iran, Rowhani studied religion at an early age, and during his teens, he was heavily influenced by leading Shia scholars. He received his bachelor’s degree in judicial law at the University of Tehran and a doctorate in law from Scotland’s Glasgow Caledonian University. He launched his political career in the 1960s as a follower of Ayatollah Ruhollah Khomeini, and after the Shah of Iran was deposed in 1979, Rowhani played several key roles in the newly established Islamic Republic. He has long been intimately associated with the ruling clerical establishment, maintaining balanced relationships with both reformist and conservative camps.

A dedicated and staunch supporter of Khomeini, Rowhani has served in the Iranian government for decades in various capacities: as a member of parliament (1980–2000), as secretary of the Supreme National Security Council (1989–2005), and as a member of the Assembly of Experts (1990–present). Moreover, Rowhani has also served on an advisory body for the Supreme Leader and headed the office’s Center for Strategic Research. A quintessential regime insider, he fully comprehends all the inner workings of Iranian governing institutions. His pragmatic style is likely to sideline radical thinking and rigid ideological posturing, as long as he enjoys public support.

Rowhani has thus far presented himself as the standard bearer of the reformist movement in Iran – a movement that was suppressed during the disputed 2009 presidential election. Although Rowhani has never spoken out in plain terms against the brutal crackdown on the 2009 Green Movement’s supporters and leaders, he has recently advocated for their release from house arrest, along with the release of former presidential candidates Mir Hossein Mousavi and Mehdi Karroubi.  His election amid a battered economy and a society with notoriously restricted civil and political rights has brought hope to the region, as well as a unique opportunity to break the stalemate in Iran’s relationship with the Western world at large. These election results appear to be equally imbued with new challenges and opportunities surrounding the negotiations over Iran’s nuclear program. Does the election of yet another reformist – one reminiscent of the Khatami era – generate false hope or genuine hope?

Up Against Entrenched Powers

Although Iran’s power structure is heavily weighted toward the Supreme Leader, and the balance of power rarely, if ever, favors the president, the election results demonstrated a groundswell of support for change. Will the new president be able to confront ruling clerics and the Revolutionary Guard, who remain firmly in control of Iran’s nuclear program and foreign affairs? The short answer is “no,” in large part because Iran’s Supreme Leader wi ll control all levers of power. Despite these challenges, however, the Iranian people have clearly expressed their desire for reform.

The public discontent is rooted in Iran’s broken economy. There has been a staggering rise in the costs of food and basic goods, with an inflation rate hovering at around 32 percent and an unemployment rate at 18 percent. The value of the Iranian currency (rial) has plunged by 80 percent within the past two years, and the country’s oil production has dropped from 2.5 million barrels a day three years ago to less than 1 million barrels a day now.

While the potential for a fresh start is real, the fact remains that President-elect Rowhani inherits a far more complex situation than did his predecessors. The Middle East and North Africa (MENA) has experienced the Arab uprisings and revolts unprecedented in its modern history. Syria — Iran’s sole ally in the Arab world — is embroiled in a civil war that some would argue began alongside the 2011 popular uprisings that swept across the MENA region. It seems Iran’s governing elites have chosen to support Bashar Assad’s regime at virtually any cost, resulting in obvious friction between Hamas and Iran on the one hand, and Hamas and Syria on the other.

The “Pearl Revolution” in Bahrain of largely peaceful protests against unemployment, discrimination and corruption, spearheaded by the Shia majority, has been fiercely crushed. The so-called “Arab Spring” has already led to the downfall of heads of state in Tunisia, Egypt, Yemen and Libya, and its spillover effects have profoundly altered the political landscape of the MENA region. This dramatic change has been orchestrated not by traditional revolutionaries, radical fundamentalists or the military, but rather by the young people – educated, middle class, labor activists, human rights activists, lawyers, bloggers, intellectuals – of that region, demanding freedom and dignity, job security and social justice.

Rowhani will do well by avoiding jingoism, inflammatory rhetoric or relentless propaganda of anti-imperialism reminiscent of the Ahmadinejad administration

A former national security advisor and Iran’s chief nuclear negotiator under Khatami, Rowhani is unlikely to drastically change Iran’s nuclear posture. He is a staunch supporter of Iran’s nuclear program, especially in the wake of Western opposition and resistance. Rowhani’s keen interest in progress in U.S.-Iran relations notwithstanding, he is not in a position to negotiate a deal, considering he holds little authority over Iran’s nuclear activities. Rowhani will do well by avoiding jingoism, inflammatory rhetoric or relentless propaganda of anti-imperialism reminiscent of the Ahmadinejad administration. Aside from the structural and systemic problems he faces as the country’s president, a question persists: Does Rowhani have the character and tenacity to achieve significant change?

Calling the U.S.-Iran enmity “an old wound that must be treated,” Rowhani has hinted at improving relations between the two countries. The Obama administration would have to reciprocate by adopting a conciliatory tone and extending a tangible offer on the table—one that gets at the core concession of loosening economic sanctions. With the Syrian crisis deepening, and NATO forces preparing to withdraw from Afghanistan in 2014, Iranian leadership can be engaged and Iran’s role could be acknowledged. Given that Rowhani has recently spoken about regional détente, there is an opportunity for the U.S. to enlist the new Iranian government to try to play a constructive role in Syria.

Ending the nuclear stalemate with the West in the immediate future is the most crucial challenge facing the Rowhani administration, because of the direct link between sanctions and the country’s economic difficulties. To be sure, the momentum of this election has given Rowhani a clear mandate to initiate direct talks with the United States. Although optimism over this change of leadership in Iran must remain guarded, it does seem the time has come to work on confidence-building measures with this new administration in Iran.

It is insincere of the United States to deny Iran any civilian use of nuclear technology whatsoever, or to prevent them from having any peaceful nuclear capability on the premise that once they have acquired the basic knowledge of this technology, it is easy to switch to other more offensive purposes. Rowhani has publicly made the case that Iran has a legitimate, non-military justification for its nuclear program. His task is to come up with a strategic breakthrough even in the face of competing pressures — both at home and abroad. Rowhani is aware of the fact that making concessions is absolutely imperative to breaking the stalemate. This means Iran should give all permanent and necessary assurances (including intrusive inspection) to the International Atomic Energy Agency (IAEA) that its nuclear program will not be diverted toward weaponization. In exchange, the “five-plus-one” ne gotiating team should agree on a certain threshold of uranium enrichment acceptable to all parties concerned, with a corresponding easing of sanctions along the way.

The internal challenge is equally daunting. If Rowhani intends to wrench the nuclear issue out of the hardliners’ grasp, then the “five-plus-one” negotiations should offer him and his negotiating team concrete inducements. Confidence-building measures aimed at Iran should also be implemented — such as a U.S. commitment not to impose sanctions or use force against it and to resume bilateral contacts on Afghanistan, Iraq and Syria. Previous U.S. approaches toward Iran — based more on stick rather than carrot — are bound to result in a crisis deferred rather than one resolved. Rowhani has repeatedly stated that a sustainable, reasonable and negotiated solution to the Iranian nuclear impasse is preferable to any alternative.

Although some optimism is warranted, however rare it has been in the recent memory of U.S.-Iran relations, it is important to highlight the fact that Rowhani is ultimately beholden to Supreme Leader Ayatollah Ali Khamenei and constitutionally subordinate to his role. It is Khamenei who exercises full control over Iran’s nuclear program. However, there is a sense in which Khamenei himself is leaning toward piecemeal negotiation and is willing to listen to different and critical views, for a variety of reasons, including the country’s growing economic insecurity and isolation, political legitimacy, and regime survival. It will be interesting to see if Rowhani’s presidency provides the perspective necessary for breaking away from the futile and implacable approach of the past and toward a diplomatically constructive way of managing its relations with the West.

The Effect of New Turkish Foreign Policy on International Trade