Within the context of their bipolar rivalry, both the United States and the Soviet Union have supported or hindered coup d’états in various parts of the world. They built their policies taking into consideration their eclectic concerns, often with the aim of thwarting each other’s influence. Nevertheless, the role of external actors in military coup d’états has been overlooked for many years, creating a vast gap in academic literature. In The United States and Military Coups in Turkey and Pakistan: Between Conspiracy and Reality, Ömer Aslan attempts to fill this gap by analyzing the role played by the U.S. in four successful coup d’états in Turkey and Pakistan throughout the Cold War. In his endeavor to provide an answer to how external factors helped shape the trajectory of these coups in each individual case, Aslan scrutinizes the role of the U.S. every step of the way: before, during, and after each of the four coup d’états he presents.

For the purpose of building a nexus between the coup d’états and the impact of an external dimension, Aslan bases his analyses upon the 1960 and 1980 coups in Turkey, and the 1958 and 1977 coups in Pakistan. The similarities of the two countries’ geopolitical significance and the essential role played by their militaries in their establishment serve as a ground for the author’s decision to shed light on their domestic civil-military relations. Throughout the Cold War, Turkey and Pakistan were of crucial importance to Washington as part of its policy of containment toward the Soviet Union. Both Turkey and Pakistan underwent transformation from Prussian and British to American military tactics and weaponry, respectively (p. 211). While Turkey enjoyed an institutional linkage with the West via NATO, Pakistan was institutionally allied with it via the Central Treaty Organization (CENTO), and the Southeast Asia Treaty Organization (SEATO). Thus, due to their geopolitical positions, both countries secured an idiosyncratic position for the U.S. Hence, the domestic atmosphere in Turkey and Pakistan directly correlated with the success of the American policy of Soviet containment in the region, which was significantly jeopardized after Qassim’s coup in Iraq in 1958 (p. 113).

Aslan begins to present his rigorous research by describing a coup as a two-level game that revolves around both external and internal dimensions. Having underlined that the coups are usually triggered by domestic factors, such as weak politicians, a deteriorating economy, a neglected military, etc., Aslan emphasizes the essentiality of an external dimension, which is usually presented by an influential international actor such as the United States. The author argues that by providing military, political, and economic assistance, the U.S. may support or oppose an incumbent government or coup plotters, giving the latter an incentive to act or discouraging them from acting.

Having elaborated on the importance of external support in the success of any coup, Aslan proceeds with an analysis of the role of the U.S. in the May 27, 1960, and September 12, 1980, coups in Turkey. By expounding on these two particular coup d’états, the author provides readers with opportunity to observe two different scenarios: while the former was conducted in violation of the command chain and removed Menderes’ pro-Western Democratic Party government from power, the latter was implemented by senior-ranking officers who overthrew Demirel’s government and received American support of a much less ambivalent nature.

In the case of Pakistan, Aslan provides a laborious analysis of the successful October 1958 and July 1977 coup d’états, both of which occurred in line with the chain of command. However, American support for each of the two coups significantly differed. Whereas after the 1958 coup, when General Ayub Khan assumed power, the U.S. economic aid significantly increased, the U.S. economic aid, and political support amid the 1977 coup, in which Prime Minister Bhutto was deposed by General Zia, was sustained at a minimal level. Resembling the Turkish scenario, both of the coups were triggered by domestic unrest caused by weak politicians.

Finally, the author concludes his analysis by highlighting the American proximity to military entities in Turkey and Pakistan after the Cold War. Having lost the influence it once enjoyed over these countries’ militaries, the U.S. nonetheless continues to project a significant reach to the military entities of these two countries.

While elaborating on every particular example, Aslan meticulously enlarges the condition of Turkish-American and Turkish-Pakistani relations before each coup. Furthermore, he explores the ways in which the U.S. may have encouraged the coup plotters by providing various incentives. However, due to the lack of available resources capable of providing a researcher with a firm base on which to ground his argument, in many cases, the author tries to base his judgment on whether the U.S. was aware of a coup in advance or not upon assumptions and logical conclusions. By cross-checking memoirs, correspondence, and other unconventional sources that belong to the figures involved in Turkish, Pakistani, and American circles, the author extrapolates American perceptions of the coups and the U.S.’ subsequent reaction. In this respect, Aslan highlights the importance of military-to-military relations between Turkey and the U.S. that were shaped as a natural corollary of the socialization of military entities via PME (Professional Military Education) and NATO (or other international organizations with an identical purpose) joint exercises (pp. 71-80). According to Aslan, in many cases, Turkish and Pakistani officers who received education in the U.S. or who had a chance to participate in joint training and acquired friendly ties with their American counterparts remain the most reliable information channels for Washington. 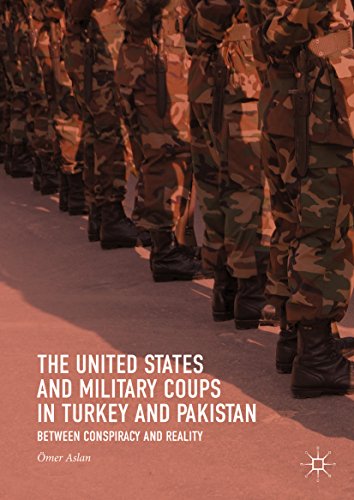