Trouble in the Tribe: The American Jewish Conflict over Israel

There is no doubt that Zionism is a heavily-loaded concept involving fierce debates over Jewish identity, as well as the impacts it has made on the course of events in world history, particularly the State of Israel and the Palestinian conflict. Although it is a relatively new aspect of the issue, the strong ties between the United States and Israel is given a central position here, considering the effective influence of the Jewish community on the American political scene.

There is no doubt that Zionism is a heavily-loaded concept involving fierce debates over Jewish identity, as well as the impacts it has made on the course of events in world history, particularly the State of Israel and the Palestinian conflict. Although it is a relatively new aspect of the issue, the strong ties between the United States and Israel is given a central position here, considering the effective influence of the Jewish community on the American political scene. This influence has even caused people living outside of the U.S. to think that American Jewry–except for some marginal individuals and groups–monolithically supports Israel at any cost and even directs American foreign policy in line with Israel’s interests.

Dov Waxman’s book, Trouble in the Tribe: The American Jewish Conflict over Israel, is a work that extensively tackles this debate. Waxman’s arguments are diligently presented, and the necessary details regarding the topic are explained for those without any prior knowledge of this issue. As a significant challenge to the perceived monolithic support of the American Jewish community to Israel, Waxman claims that a historic change is taking place in American Jewry’s relationship with Israel, in which unquestioned support for Israel with a pre-accepted consensus is over and ‘Israel is fast becoming a source of division rather than unity’ (p. 3). Waxman predictably applies a sociological perspective on the discussion rather than maintaining a focus on the international relations aspect of the topic.

Under the spotlight of his main argument, the author goes into detail about how the American Jewish relationship with Israel has evolved throughout history in the first chapter, “The Changing American Jewish Relationship with Israel.” In the following chapter, “The End of ‘Israel, Right or Wrong,’” he analyzes how this aforementioned change was engendered. He maps out the divergence of thoughts on this issue in chapter, “The Argument about Israel.” He specifically focuses on American Jewish public opinion about the Palestinian conflict in the chapter “The Erosion of Consensus,” while the chapter entitled, “The Fracturing of the Pro-Israel Lobby” describes the pro-Israel lobby issue as a hot potato topic. Discussing the current situation of the American Jewish establishment in “The Challenge to the Jewish Establishment,” and the gradually eroding cohesion of the Jewish community in, “The Polarization of American Jewry,” the author concludes his work by emphasizing the implications he draws from his study for U.S. policy-makers, the Israeli government, and the Jewish community.

As the greatest success of the book, it can be said that the author seems truly convincing about his main argument. Against some deep-rooted generalizations and clichés, which might be observed in the minds of many people who are interested in this topic, the book poses a strong challenge by explaining what actually happens beyond those perceptions, and bringing those notions into serious question. The author goes so far as to describe the current situation as “the new Jewish Question” (p. 12), and clearly emphasizes the role of young American Jews in the shifting dynamics of the relationship between American Jewry and Israel in many parts of the book. Therefore, the reader is able to understand that the reality is far different from the presumed monolithic support to the State of Israel.

Another successful aspect of the book involves the classifications made by the author for some sub-debates among the Jewish community. For instance, in the first chapter, he demonstrates a considerable achievement in discussing the content of the American pro-Israel stance by explaining several pillars which he calls the five “Fs”: Familyism, Fear, Functionality, Faith, and Fantasy; this analysis assists him in being more persuading in his arguments. Despite such classifications, mostly involving some redlines and clear-cut arguments which might easily put the author in a difficult position, Waxman avoids that danger and demonstrates how different camps in the Jewish community are actually separated by relatively thin lines.

Last but not least, Waxman brings the issue of Jews getting married to people outside of the community to the forefront. He reveals this intra-community debate in which the issue is seen a grave danger for the protection of Jewish identity, and recalls what Gilad Atzmon, a long-debated figure in the Jewish community, said about the concept of “marginal politics” in his book The Wandering Who (2011, p. 43): “For the marginal politician, assimilation, emancipation, integration and even liberation are death threats.”

Ironically, this positive aspect of the book also paves the way for noticing some of its failures. For instance, the discussion of Jewish identity in its essence, although discussed in some parts of the book, remains reasonably weak. Despite Waxman’s success in framing the divergence of thoughts on the Palestinian conflict and the State of Israel among the Jewish community, he seems to have sidestepped the debate on the essence of Jewish identity and presumed a given definition of being a Jew. Acknowledging that the intra-community challenges involved in the issue of supporting Israel are also linked to objections over commonly accepted aspects of Jewish identity, would give Trouble in the Tribe the appearance of a full-fledged work. Waxman notably fails to discuss the fact that many Jews who staunchly support Israel actually embrace what Chaim Weizmann, a prominent Zionist figure and the first Israeli president, said on being a Jew: “There are no English, French, German or American Jews, but only Jews living in England, France, Germany or America.”

The lack of debate on the issue of Jewish identity also detriments Waxman’s discussion of the future of Israel topic. The author focuses instead on evaluating the issue within the paradigm of one-state or two-state solutions, which should more properly be classified under the Palestinian conflict debate. Specifically, the Palestinian conflict and its repercussions within the Jewish community in the U.S. overshadow the debate on the State of Israel as a matter of Jewish identity crisis. This containment of the discussion also leads the author to fall into the trap of repetition and undermines his productivity. Reference to Yakov Rabkin’s works on this issue, and discussing how the U.S. Jewish identity will be shaped in regard to the future of Israel would be definitely more contributive to the literature.

Despite these shortcomings, Trouble in the Tribe has the potential to make a significant contribution to the literature on the issue of U.S.-Israel relations and the U.S. Jewish community. Not only those carrying out academic studies, but anyone who is interested in learning about these much-discussed topics, will certainly gain a clearer perspective with the help of this book. Consequently, Waxman’s work and its insightful comments will allow people to conduct discussions on this topic on a more solid basis. The author provides a clear analysis of what is going on within the American Jewish community, a necessary contribution given the likelihood of more pieces being published, especially thanks to the current context of U.S.-Israel relations under the Trump administration. 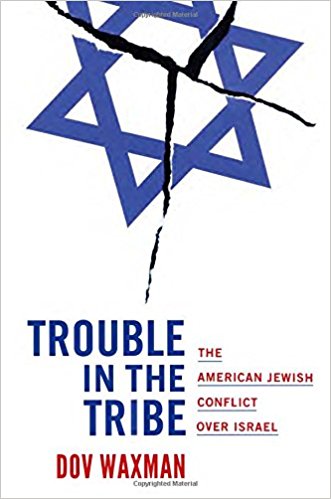