One of those countries that have been highly affected by the so-called Arab uprisings is Libya. The intensification of efforts to create a unified Libyan state over the past year indicates that the war in this country is closer to the end and that the actual conjuncture seems promising. In this respect, Dr. Murat Aslan’s book, Security Sector Reform: A Crucial Step towards State Building, seeks to create a well-developed framework to give us a base for a more reliable assessment process on achieving a “wider and deeper state-building program to establish order in Libya” (p. 21). Determining the purpose of the research as Libya’s deprivation in terms of security structure, the author examines “what an ideal security sector reform (SSR) might look like, given the urgency of the situation, exacerbated by the lack of a united states” (p. 21).

Aslan notes in the first chapter that the reform “is also a process that requires preparation, planning, execution and feedback for adjustment” (p. 165). He later declares a six staged process that is designed by considering the conjuncture in Libya: creating organizational capacity for SSR, preparatory phase, planning and resourcing phase, strategic communications, implementation, and consolidation phases.

Moreover, the author underlines the significance of SSR’s institutionalization that will provide the lastingness of the security reform in the stage, which is consisting of the creation of organizational capacity. In the preparatory phase, he claims that data accumulation is essential about being aware of the material inventory’s actual status. He then comes to the planning and resourcing phase. This phase is particularly important because the plans for the implementation of the disarmament, demobilization, and the reintegration process, which is recommended to put into practice along with SSR, are required to be designed in this stage. Aslan emphasizes the necessity of a transparent and accountable proceeding of these two intertwined processes, and strategic communication stands out in this context. As to the implementation phase, the most momentous argument is the value of the SSR’s nature based on a staged structure, “which aims to improve the security sector’s performance” (p. 174).

Aslan evaluates the Libyan state’s actual situation in terms of lacking security structure as a heritage of the Qaddafi administration. To achieve the absolute security of the regime, armed forces have been shaped in a form that does not have any capability because of the divisions, which are stimulated by the regime itself. After the revolution, several groups emerged all around the country, which have been armed by dint of the weapon storages constructed in various locations. Thus, when the revolution began, Qaddafi could not defend his regime due to a lack of adequate armed forces to let him do so.

According to Aslan’s threat and risk analysis, Libya’s insecurity is an output of the divided security structure based on the local actor’s armament to assure only their neighbor’s security. However, the divided security structure does not do a disservice to the objective of a united Libyan state only due to the Qaddafi legacy. Despite the disorganized armed groups, the existence of a regular army with a structure that does not allow it to go beyond being a ‘hollow army’ is also worthy of mention as a reason for the insecurity in Libya.

Unfortunately, Libya’s actual security forces’ strategic architecture suffers from unclear lines of authority. In his book, he points to the importance of the arrangement of the hierarchy between the Ministry of Defense (MoD) and the General Staff. Two different models stand out at this point. On the one hand, Aslan proposes a system that presupposes a structure in which the MoD is responsible politically for every military action. At the same time, the Chief of the General Staff’s (CGS) authority is limited to executing the MoD’s consigns. Also, this model consists of the military staff’s participation in the decision-making process. On the other hand, a system that involves the CGS’s responsibility, which is granted with full authority over its subordinates, to the MoD is recommended. Hesitating which one is the more appropriate for the reform process, Aslan advises the first-mentioned model should be executed once the SSR is successfully implemented as the other needs to be put into practice at the beginning of the SSR’s implementation. Given that a decade is imperative for the consolidation of the reform, the resilience proposed to diversify options for the execution of the SSR plan is likely to give rise to a new disaccord in terms of sharing the authority soon.

It is hard to say that the model change will be realized sufficiently in a way that prevents the new disaccord subject’s occurrence in a decade. It is possible to interpret that this proposal signifies a rupture in the series of arguments shared within the well-planned course of the book, which aims to promote the main thesis created around the idea of establishing order in Libya, along with the objective of wider and deeper state-building. Therefore, considering the risks for new probable crisis zones in the internal political proceedings, to share an action plan for forthcoming disturbances would be convenient with the book’s successfully developed structure that permits the reader to follow with ease past, now, and the future of Libyan crisis. Notwithstanding, the author suggests that:

As SSR progresses, there will be pauses, setbacks, and side-tracks. The situation will evolve as time goes on. Re-evaluations and adjustments will be necessary. Some programs and institutions will need to be expanded, while others may need to be abandoned or re-tooled. The process will take several years, probably decades (p. 175). 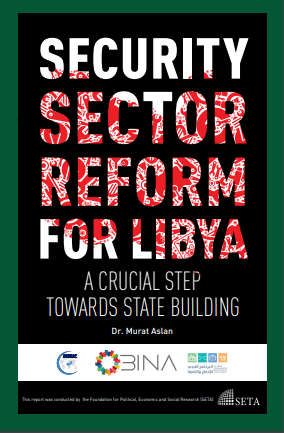