This book consists of 18 chapters, proving how complicated even only the external dimension of the Syria conflict is. The first chapter covers the basic dynamics of the regional system that formed the struggle for power over Syria. Then, competitive external intervention is discussed, as a consequence of which various regional and international alignments caused the escalation of violence and a stalemate. In this chapter, Hinnebusch openly declares, “Turkey opened its borders to a flow of ISIS recruits into Syria while allowing oil to be imported from ISIS-controlled oil fields” (p. 10). Yet, even the U.S. Secretary of State John Kerry and the CIA asked Turkey’s pardon regarding the 2014 allegation of oil trade between Ankara and ISIS.1 Such an acknowledged expert cannot know about the border between Turkey and Syria exceeding 900 kilometers, EU countries and the U.S. not sharing intelligence with Turkey, the need to capture ISIS militants, terrorist attacks in Turkey carried out by ISIS at the time, and operations by Turkey against ISIS, which all demonstrate the bias of the author on the matter rather than the truth, or the matter being politicized.

Chapters 2–4 are about the ‘states system’ on an international and regional level. These chapters dwell on how the Syrian conflict was driven by global and regional powers; they show the instrumentalization of sectarianism by these powers to outrival others. Thus, the first three chapters cover the systemic impact, that of the regional order, on the Syrian conflict. However, these chapters mainly treat the Syrian conflict both as an internal struggle and an international proxy war. Certainly, external actors had a role in turning the uprising into a civil war, stretching the timeline of the war and causing a long and costly stalemate (p. 38). Yet seeing the conflict as a proxy war may lead to overlooking the concerns of domestic actors and the domestic reasons that first brought about the uprising and then the conflict.

Chapters 5–16 cover the motives and strategies of the most important regional and international actors (Hizbollah, the Palestinians, Iran, Qatar, Saudi Arabia, the U.S., Russia, the EU) and explains how the uprising affected the relations among regional states (Turkey-Syria, Turkey-Iran, Iraq-Syria). The overall argument is that “Syria was not another Libya and Assad was not Qaddafi, bereft of regional allies and international partners” (p. 106). Put differently, in terms of regional and international dimensions, the Syrian war is just a war of alliances, whether it is between states or between states and violent non-state actors.

Adham Saouli explains why Hizbollah intervened in Syria over its strategic relations with Syria and Iran in the Resistance axis. This intervention in Syria helped Assad remain in power, and helped Iran and Hizbollah retain their power in the country. This confluence of interest exemplifies how the expansion of the sphere of influence of non-state actors and an increase in their impact on regional politics were made possible by the state failure in Syria (and Iraq). Likewise, Raymond Hinnebusch demonstrates how Syria and Iraq, two failing states without proper control over their borders, became a single arena of cross-border conflict taking place among belligerent tribes and sectarian movements that brought about the rise of ISIS at the same time.

Valentina Napolitano covers the political mobilization of Palestinian refugees in the Syrian uprising over the case of Yarmouk camp and makes a valuable contribution to the literature by showing, through field research, the dilemmas and hardships faced in this process by a community neglected in the context of the Syrian war. Further, May Darwich makes a significant theoretical contribution to the literature by focusing on the ‘recognition’ concept in contrast to the sectarian and/or geostrategic perspective by explaining “Saudi Riyalpolitik” and its quest for recognition of regional status. In this way, she successfully integrates a ‘thin constructivist’ perspective into the strategic dimension of security interests. Similarly, Marwa Daoudy discusses the process whereby the peaceful relations between Turkey and Syria built in the 2000s deteriorated due to the Syrian uprising with the help of Barkin’s idea of “realist constructivism.” Thereby, she rejects the “misleading opposition between idealism and materialism” (p. 194).

The reasons why Iran has viewed the Syrian civil war as a zero-sum game between its allies and the West and its regional allies, and how sectarianism has been instrumentalized by regional powers are well explained in different chapters. For example, Özden Z. Oktav discusses how ‘bitter frenemies’ (Turkey and Iran) have tried to cooperate despite their opposite approaches on the Syrian crisis considering their common mistrust of the West, the negative spillover effects of the crisis and mutual economic and energy interests.

Regarding the ways in which rival global powers (namely the U.S., Russia and the EU) affected the conflict, Jasmine Gani explains why the Syrian people do not matter to America (p. 212), stating that the “international norm doesn’t mean much” (p. 217). Thus, the selective inactivity of the U.S. in regard to the crisis, especially the Ghouta attacks, damaged its hegemonic credibility, although “the US was doing something” against ISIS (p. 222). In contrast, as Daria Vorobyeva and Nikolay Kozhanov clarify in their chapters, respectively, Moscow, under the leadership of Putin, attempted to redefine itself as a world power in its rivalry with the U.S. by being an irreplaceable actor in the resolution of the crisis and a great power in the MENA region. Additionally, the Astana talks showed that Russia could negotiate with both the opposition and the regime and, interestingly, regionalized security issues with Iran and Turkey. In short, Russia has become a “game changer” in every respect via its strategic intervention in the Syrian crisis (p. 258). Lastly, the Syrian civil war has once again exemplified how the EU cannot employ a coherent and effective foreign policy because a consensus cannot be achieved among its member states. The EU reprimanded the Syrian regime per democracy and human rights, but its sanctions only hurt Syrian civilians while having no real impact on the course of the conflict. Also, the European response to the Syrian refugee crisis has called into question its own values.

The last two chapters discuss the failure of international instruments, including economic sanctions and the “Responsibility to Protect” doctrine (R2P), in terms of handling conflict in the case of the Syrian war, clearly showing that international society is getting more and more incapable of bringing order to an utterly disorderly world.

Overall, this book does an impressive job of revealing the external/international dimension of the Syrian conflict. With its innovative and interdisciplinary approach, it is a major contribution to a better understanding of the conflict in both theory and practice. Thus, anyone interested in the Syrian Crisis and Middle Eastern politics would benefit greatly from it particularly if it is read together with its previous edition. 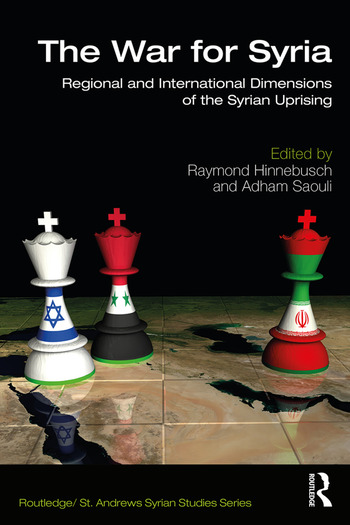