The editors of the book state that it is the product of two working groups held at Georgetown University of Qatar in 2017. The volume consists of ten valuable essays discussing different states and societies of the Middle East and authored by experts of various regional and non-regional origins.

The first chapter elaborates on the history of sports and the sport-society connection by focusing on the 20th century in detail. In this respect, Murat C. Yıldız places a special emphasis on the parallelism between the political renaissance (al-Nahda) of the post-WWI era in the Arab states and developments in the social sphere, particularly in sports. Here, the main focus of al-Nahda (in both politics and sports) concentrates on Egypt (mostly Cairo and Alexandria). General developments in sports are discussed within the regional context, and the author notes the initial steps taken by British soldiers, workers and merchants in Istanbul, Tehran and Cairo as ‘nodal cities’ (pp. 36-38). Football, gymnastics and other team sports were the locomotive of sportive activities in the region and missionary schools also played a crucial role in introducing sports.

The second chapter, written by Dag Tuastad, utilizes sociological tools (social memories, group membership, symbolic battles, etc.) to explain the fragile set-up of Jordanian society. This riveting piece compares the ethnonational social memorialization of Palestinian Jordanians and East Bank Jordanians through the heated rivalry of their symbolic football clubs, Wihdat and Faisali FC, respectively. Tuastad concludes that, in the Jordanian context, football is in itself a process through which people and nations are socially constructed (p. 54).

A similar approach is used while polarization and dichotomy are explained regarding the rivalry between the secularism/liberal project and the right-wing/nationalist discourse symbolized by the sportive competition of Hapoel Tel Aviv and Beitar Jerusalem (a rivalry that also reflects the Tel Aviv-Jerusalem dichotomy) in the third chapter. Tamir Sorek skillfully addresses the Holocaust, Arab identity, religious and nationalist trends, the settlement issue and other political/cultural issues of Israeli society in the context of the Hapoel vs. Beitar rivalry.

The fourth and fifth chapters are prepared following structured interviews and field studies conducted in Qatar, Kuwait, Egypt, Saudi Arabia and Iran that mainly focus on female football players and sportswomen’s use of social media in the region. Both studies produce similar results and observations regarding the Middle Eastern Muslim societies’ approach to women’s sport activities (mostly restrictive and less supportive); on the other hand, both studies also highlight the dedicated efforts of women to overcome these social barriers and continue their professional careers.

The situation in Qatar, the host country of the workshop that produced this volume, is elaborated in a second chapter by La May, within the framework of freedom of expression regarding the organization of the world cup. La May gives a detailed analysis of the debates about sporting mega-events and human rights with a special focus on China and Russia.

The editors of the volume dedicate a separate chapter to a detailed examination of the Turkish case; Tınaz discusses the close link between sports, sport clubs and the state system in Turkey through concrete data and interviews with officials by highlighting four points: efforts to increase youth sporting participation, improving elite athletes’ performance, improving the sporting image of Turkey and gains in internal/external prestige. However, reflecting disappointment, Tınaz’s conclusion about the development of sports during the last two decades sheds light on the future: “Using a holistic approach, sports should be a goal in themselves, not a tool for political and economic gains… In this manner, the government achieved economic success but lost the focus on sport” (pp. 144-145).

The eighth and ninth chapters focus specifically on Lebanese sports. Nadim Nassef asks the critical question, ‘why is Lebanon failing in international sports?’ despite smaller states’ relative success. Following the review of the relevant literature about elite sport success, Nassef highlights the significance and influence of political, economic, demographic and cultural factors. While discussing Lebanon’s failure in sports, Nassef’s two critical points not only describe the Lebanese case but are also valid for the greater Middle East and developing countries: i) the problem of corruption at all levels and, relatedly, ii) the occupation of key positions based on political affiliations rather than on skills and capacities (pp. 161–163). In the ninth chapter, Reiche criticizes the improper decision of the Lebanese government to host multiple continental mega-sporting events to contribute to the soft power and promotion of the country; instead, he advises multinational hospitality which has recently gained popularity particularly in European sporting events to reduce economic risk.

In the final chapter of the book, Simon Chadwick discusses the commercial and business dimension of sports, mainly by evaluating the six members of the Gulf Cooperation Council (GCC): Saudi Arabia, the UAE, Qatar, Kuwait, Oman and Bahrain. By addressing this controversial issue, Chadwick elaborates on the increasing dynamism of the GCC countries in the European sports market through the acquisition of prestigious football clubs, shirt sponsorships and stadiums via the naming right deals of the region’s national airways. On the other hand, he also points out the domestic problems of those states and highlights fluctuating oil prices, political tensions among the GCC states, climate difficulties and weak attendances at games that challenge the sustainability of the regional countries’ growing activism in their sport hosting events and beyond.

Throughout the book, one of the main observations that the contributors highlight is the sophisticated nexus among sports and society/politics, especially in terms of the development of sports, the hosting of mega-sporting events, political symbolism, the economic dimension, etc. The in-depth pieces skillfully discuss the sociological and economic aspects of this interaction for different Middle Eastern countries. From this point of view, the volume offers a rich ethno-political dimension, as well as contributing to gender, modernization debates and the political-economy framework.

However, Reiche and Sorek’s book excessively focuses on certain countries/regions while ignoring some important political and socio-economical centers in the Middle East. Qatar and Lebanon attract too much attention along with the GCC region, while the editors miss the importance of Iran, Egypt and North Africa. Also, the influence of the GCC countries’ increasing investments on their foreign policies, along with these states’ negative domestic perceptions within the context of GCC-Europe relations could be critically elaborated; the final chapter slightly touches on this issue but does not go beyond the surface.

Despite its limitations, Sport, Politics, and Society in the Middle East makes a significant contribution to the study of the Middle Eastern sociology and domestic politics focusing on state-society relations within the context of sports and recommended to those who follow the recent regional trends in academic/non-academic base. 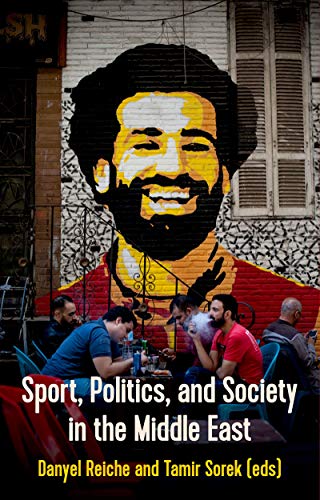