The Fracking Debate: The Risks, Benefits and Uncertainties of the Shale Revolution

There is no doubt that the U.S. “shale revolution” is a game changer in the global energy markets. In less than a decade, it has positioned the U.S. as a net natural gas exporter and the world’s biggest crude oil producer.1 The Fracking Debate, written by Daniel Raimi, a senior research associate at Resources for the Future, scrutinizes the activity of hydraulic fracturing, or fracking for short, and its realization of the shale revolution.

At the very beginning of the book, Raimi clearly gives his aim, “to present a full view of shale development in the United States… which has benefits and risks and uncertainties at the same time… and to provide a better understanding of all three” (pp. 6, 9). In his book, Raimi compiles and assembles information he gathered during his research from his own interviews and conversations with experts, businesspeople, and academics in the fields of energy economics and the environment, environmental law, hydrogeology, state regulation, locals who reside near fracking places, books, articles, and reports he had read (p. 8).

The book is comprised of twelve chapters and, in each chapter, Raimi tries to answer one of the questions that people ask the most. The first two chapters provide an introduction. The first chapter briefly describes Raimi’s journey on the roads of the shale revolution; when he began to work on the issue, why he started out, how he came at the benefits and risks and uncertainties, and his aim behind writing the book. The second chapter tersely explains the process that brought the oil and gas industry in the U.S. to the point of revolution and what fracking has done for energy production in the U.S.

The third, fourth, and fifth chapters cover the topics that people are most anxious about. Chapter three, entitled “Does Fracking Contaminate Water?” and chapter four, entitled “Will Fracking Make Me Sick?” explain that the activity of hydraulic fracturing or that fracking needs liquids, (i.e. water) mixed with chemicals that get injected into shale formations so that oil and gas can erupt above the surface. This scares people living close to the shale production regions, raising concerns that fracking liquids can contaminate their water supplies and cause their clean drinking water to turn into flammable poison (p. 33). However, as Raimi found, if everything goes according to plan, this is very unlikely to happen. Here, good well construction is significant; states in the U.S. have established extensive regulations on fracking, detailing what type of chemicals may be used, how deep they must be injected, how long they must sit, what pressure they must withstand etc. (p. 43). While chemicals used during the fracking activity can harm people or animals if they are directly exposed to a sufficient amount of these chemicals, or if the chemicals are mixed into water; therefore, people living close to production sites are not exposed to these chemicals directly, and no research indicates that their health has been harmed by exposure to chemicals mixed in with fracking fluid (p. 59).

The following three chapters discuss environmental concerns. The fifth investigates, “Does Fracking Cause Earthquakes?” and finds that yes, they do. However, fracking-caused quakes have generally been smaller and have not caused damage to property. Moreover, these quakes not only result from hydraulic fracturing but also from conventional oil and gas production as well. The sixth responds to the question, “Is There Any Regulation on Fracking?” and answers yes: state governments are taking the lead on regulating fracking. Since the size of reserves, the level of production, and policies vary from one state to another, regulations also vary from one state to another. The seventh chapter discusses, “Is Fracking Good or Bad for Climate Change?” Since the shale revolution has enabled the U.S. to produce more natural gas and has led gas prices to fall, electricity generated from coal has begun to be replaced by natural gas, which is cleaner than coal. Thus, fracking has reduced carbon dioxide emissions in the U.S., but this does not mean that it is enough to cope with climate change.

The next three chapters focus on economics and politics. Chapter eight debates, “Will Fracking make the United States Energy Independent?” and responds that the answer is changeable depending on how one defines independence. If it means there is no need to import any other energy product, then the answer can be “yes.” But if it means the U.S. will not be affected by any external factor, then the answer is “no.” Because the oil market is global, the rise and fall in crude prices directly affect every buyer in the world (p. 140). Chapter nine investigates “Is Fracking Good for the Economy?” Raimi argues that the shale revolution has obviously created new jobs and a new working sphere in the oil and gas industry. 25 out of 50 states of the U.S. have become energy producers but the big picture is rather complicated. When producing more oil and gas leads prices to fall and benefits end customers, it can hurt producers by decreasing their revenue, cause investments to decelerate or even stop, and finally leads to industry layoffs. And since the oil market is global, anything happening in any energy producer surely affects the others as well. Thus, it is not easy to say whether fracking will benefit the economy or not, as there are different dimensions in the equation. Chapter ten, “Will Fracking Spread Around the World?” explains that although there are countries with large shale reserves, the federal government’s support, the entrepreneurial soul of the U.S. oil and gas industry, and private land ownership have benefitted the U.S. (pp. 173-175). Moreover, although fracking has been spreading to other countries, a variety of factors such as laws, environmental concerns, etc., have slowed or even prevented its development.

In the last two chapters, Raimi concludes that while many people benefit from the shale boom and its opportunities, and many people complain about its disadvantages, the pros outweigh the cons and the positives outweigh the negatives. The oil and gas production boom will continue in the near future unless a piece of groundbreaking evidence about risks to public health or the environment is found.

Consequently, The Fracking Debate is a well-organized book clearly explaining the shale revolution in the U.S. through an exploration of the most frequently-asked questions. Although Raimi begins by drawing a neutral perspective, and explores both sides of the debate on each question, it can be said that the book is ultimately pro-fracking. Yet, it is still worth reading to better comprehend the efforts behind the revolution which was almost unpredictable before it happened a decade ago. It is a must-read book for researchers working on the U.S. energy industry, and highly recommended to anyone trying to understand the current trends in the global oil and gas market. 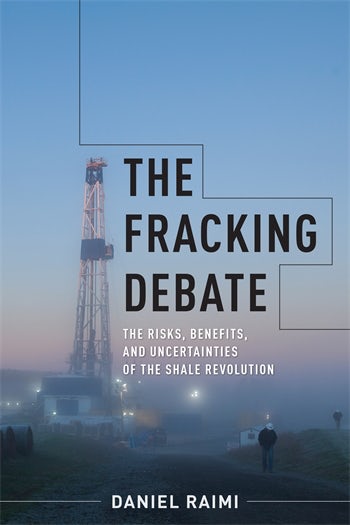