Muslim Reformers in Iran and Turkey, The Paradox of Moderation

Usually one expects a stark contrast when Iranian and Turkish developments are compared since the distinction between Turkey’s enforced secularism and Iran’s theocratic state could not be more striking. Yet, according to Tezcur, these two parties represent the most prominent post-Islamist movements in the Middle East, and therefore it behooves a political scientist to inquire whether they share any common features.

Ultimately Tezcur uses this comparison to test a particular political science theory—that of moderation. The common wisdom is that more radical groups will moderate as they attempt to achieve integration into legal and electoral systems. This thesis has proved especially important for academic analysts and policymakers in assessing the role of Islamist movements in the Muslim world and suggesting appropriate strategies for managing their incorporation into civil society.

The general consensus has been that moderation occurs because the requisite behavioral changes involved in the processes and strategies necessary for such groups to successfully participate in elections will eventually lead to changes in their outlook and ideology both at the individual and collective levels. The pragmatic compromises that are necessary in order to survive state repression and to have a broader electoral appeal will blunt initial fervor and commitment to rigid principles on the part of such movements.

Tezcur observes, however, that in both the Turkish and Iranian cases the leaders of these movements were already moderate and therefore we cannot conclude that moderation occurred due to their parties’ participation in the electoral process. More saliently, Tezcur interrogates the nature of “moderation”, in particular its consequences for ultimate trajectories of democratization in these two countries and, by extension, in other contexts.

In a detailed analysis of the two cases Tezcur tests the moderation theory and complicates it, making the important observation that while “moderation” has characterized the recent history of these post-Islamist movements in Turkey and Iran it has not necessarily led to the parties involved becoming fully democratic in the sense of their supporting initiatives such as promoting human rights in all instances or of embracing transparency.

The book comprises nine chapters consisting of an introduction, followed by a discussion of how the transformation of Islamist movements into moderate reformist parties takes place and the implications of this for moderation theory. In order to set out the parameters of his argument, Tezcur presents a lucid overview of the development of moderation theory, tracing its evolution from the work of Robert Michels on radical socialist parties in the early 1900s. Three causal components leading to the moderation of such movements are their experience of state repression, participation in electoral competition, and their need to develop sufficient organizational resources (p. 31). Similar factors were seen to have been at play in the rise of Christian Democratic parties in Europe that moved them from confessional identity politics to embracing more broad and inclusive platforms.

Chapter three reviews the theoretical and historical elements in the relationship between Islam and democracy, tracing actual instances of democratization in a broad spectrum of Muslim countries to prove the point that Islam is not intrinsically undemocratic in either theory or practice. While the idealized textual analysis of the sort carried on by Muslim intellectuals can fairly easily demonstrate the fact that, rather than being timeless and rigid, Islamic principles can be invoked and interpreted to support agency in a quest for human rights, the rule of law, accountability of authority, and so on, Tezcur stresses the need to augment such material with hard data and the analysis of actual democratization in Islamic political contexts. Citing examples from recent surveys conducted in Muslim countries, Tezcur points out some of the inconsistencies plaguing purely cultural explanations for the development of democracy or lack of it in Muslim societies show that concepts such as democracy itself, or even shari’a, may have varied valences across nations.

Chapter four addresses how Muslim reformers engage with secular and liberal democratic elements and traces how Islamist thought has evolved against the background of the end of colonialism, responses to socialism and communism, and other issues. While current reformist parties are not set on establishing the totalizing Islamic state as envisioned by Maududi or Qutb, they would accept measures that promote conformity in the public sphere or maintain religiously sanctioned socially conservative attitudes and behaviors. As Tezcur notes in his introduction, this non-liberal dimension of post-Islamist reformism leaves him dissatisfied with its democratizing and liberal scope since such parties have not fully come to terms with social pluralism. In addition, both of these parties are susceptible to their opponents’ charges that they do not support the foundational principles of their respective national regimes, which means that they have each had to shift their platforms away from certain reformist agendas for the purpose of political survival.

Chapter five discusses the institutional environment of Muslim reformers in Iran and Turkey through concise yet detailed discussions of topics such as the constitutional and political system, the role of current economic factors, and the military and security apparatus. Chapters six and seven respectively review the recent histories of the Iranian and Turkish parties and the cases of recent elections. The Iranian Reform Front movement is described as arising from the unique case of a popular revolution that increasingly became channeled into a theocratic regime. By the 1990s many leftist leaning proponents of the 1979 Islamic Revolution had become disillusioned with the turn of events in the Islamic Republic. However, despite apparent reformist success in the elections of 2000 that brought Khatami to power, the Governing Council was able to continue to clamp down, closing newspapers, arresting activists, and so on. In the 2004 elections many reform candidates were disqualified. Ahmedinejad’s June 2005 election ended the first reform era (137) and the Iranian reform movement has proven to be been unsustainable.

The story of the AK Party is conversely one of electoral success followed by unprecedented reforms (some stimulated by the EU negotiations), increased economic growth, and an expansion of Turkey’s sphere of political influence. While Tezcur faults the AK Party’s democratizing stance on issues such as the rights of ethnic minorities, it is unclear whether internal or external pressures are most salient in restricting more progressive moves.

Tezcur has been a consistent observer of the rise of the AK Party over the past decade or so and was able to conduct research on the ground during the election cycles of 2002 and 2007. His overview and presentation of the Turkish political scene is astute and nuanced. Although his work on Iran is more recent, he has been able to conduct significant research there on several occasions and in particular during the 2005 and 2008 elections. While the methodology of this study is primarily qualitative, hard data including surveys conducted by the author, is also included and analyzed, in particular as it relates to election results.

In Tezcur’s concluding chapters, chapters eight and nine, one of the main challenges to the premise of the study is addressed—why the AK party has been able to attain and maintain success in Turkey while the Iranian reformers did not succeed politically. He also makes an important distinction between the states treated here and weak states where Islamist movements such as Hamas and Hizbollah operate with strong organizations, concluding that these latter groups have little incentive to moderate under such conditions.

In terms of explaining the failure of the Iranian Reform Front, over time the movement became alienated from other activists in the spheres of women’s rights, student associations, and workers’ movements. Operating within the electoral system could not counter the authoritarian measures of the Iranian state. In the case of the Turkish AK Party, Tezcur sees weaknesses in its process of accommodating more and more with the “guardians” of the republic, and its implementing of increasingly authoritarian and hierarchal structures within the party. With the 2011 electoral success of the AK Party, continued expectations of constitutional reform will be a test of its sincerity and will to democratize.

World attention focused on the 2009 uprising in Iran when the Green Movement supporting Mousavi claimed that elections that gave an overwhelming victory to Ahmedinejad’s hardliners had been rigged. Despite significant mobilization of the opposition and large protests, government repression ultimately contained and silenced the movement. In the aftermath of the Arab Spring of 2011, it seems even clearer that the only way to dislodge authoritarianism in such cases is civil disobedience rather than taking the route of legal procedures and negations. The difference, then, in the respective political cultures and ideology of the regimes in Turkey and Iran was crucial in the ultimate fate of moderate reformers, despite the common factors in their processes of moderation.

The book is a valuable addition to the literature on recent Middle East politics that is written in crisp and lucid style accessible to those interested in contemporary political science theory as well as to researchers on democratization, contemporary Middle East studies, and in particular current developments in Iran and Turkey. 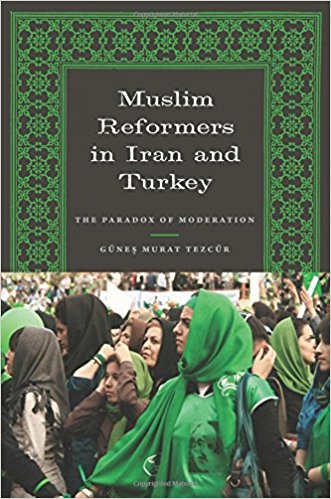 The Politics of Chaos in the Middle East