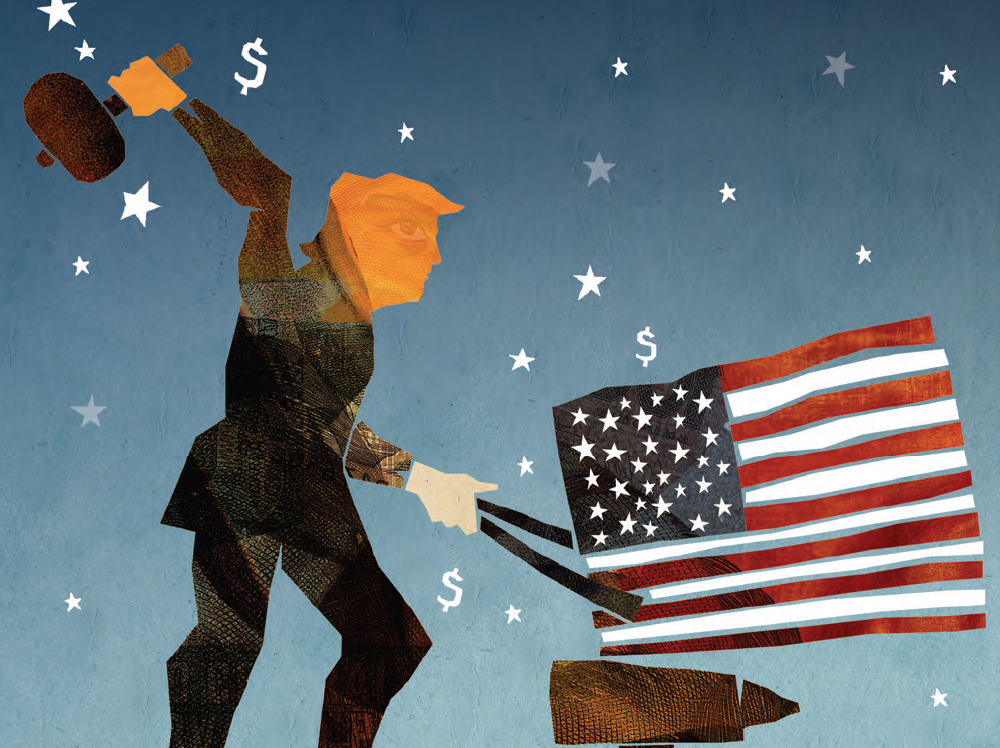 Similarly, Trump was faced with many legal and political criticisms immediately after his inauguration in January 2017. Prosecutors blamed some of his team members for plotting against the country and some observers even began to talk about the impeachment of the president. Trump had no other choice but to ask for the resignations of a number of his team members such as the National Security Advisor Michael Flynn.

One of the most radical, ultra-nationalistic and also inexperienced presidents in American history, Trump insistently asked the Americans to vote for him in order to “make America great again.” After coming into power, he promised the Americans to restructure the American political system –constructive for some, destructive for others– and to rebalance world politics in favor of the United States. For this endeavor Trump has had to fight against not only external challenges but domestic ones as well, because of his pledge to change the main course of both American and global politics.

Domestically Trump is commited to annihilating the influence of the traditional establishment in Washington D.C. and the mainstream media based mainly in New York. In other words, while trying to rule the most powerful state in the world, Trump is determined to continue otherizing influential power circles in the country. On the one hand, he opposes the traditional ruling elites in Washington D.C., where he received the least support in the elections. On the other hand, he has been following an antagonistic policy towards blacks, Latinos and Muslims living in the U.S. His supporters are mainly white middle and lower-middle classes, known for their xenophobic, anti-immigration and anti-globalization tendencies. Moreover, many Republicans do not share his views regarding the minorities and social policy and they openly criticize the Trump administration, especially for his harsh rhetoric against certain identities and for his close association with Russia before and during the election campaigns.

In the international setting, Trump has preferred to use a confrontational political discourse. He has been using a harsh rhetoric against many global actors such as the EU, China and Iran. So far he has threatened a number of countries with the use of military force, most notably North Korea and Venezuela, and has openly declared his resentment against significant American allies such as Germany, Saudi Arabia and many other countries in Europe and the Middle East, for not contributing to American hegemony but rather acting as free riders in international politics. Trump has abandoned the soft power based and globalist foreign policy of the Obama administration, and instead he has preferred to depend upon hard power. While he attempts to consolidate American global hegemony, Trump refuses to provide global public goods such as liberal values and a free market economic system. On the one hand, he wants to subjugate all American allies and questions the effectiveness of traditional U.S.-led multinational institutions such as NATO and the United Nations. On the other hand, he wants to punish whichever country tries to expand its sphere of influence.

As briefly mentioned above, Trump has to face many domestic and international challenges in order to be able to remain in power and maintain his authority. According to numerous observers, Trump’s domestic and foreign policies are not consistent. He has been following an ultra-nationalist policy both in the domestic and international setting. Thus, he has paved the way for political and social instability at home and a chaotic atmosphere in the world. The inconsistency and uncertainty of the Trump administration leads to mistrust both at home and abroad. It remains to be seen in which way Trump’s domestic and foreign policy orientation will turn. For now, it can be said that recent developments in both the U.S. and the world do not bode well.

Aiming to analyze and elucidate on how Trump is trying to reconstruct the U.S., this issue of Insight Turkey familiarizes the readers with the most debated domestic and international issues, among them the U.S. elite crisis, Islamophobia, NATO, nuclear North Korea and the Middle East.

Pieces, written by Inderjeet Parmar, Lütfi Sunar and Tuncay Kardaş, focus on the domestic affairs of the U.S. and touch upon salient issues that the Trump administration is currently facing. Bringing the attention to the need for a new ‘grand bargain,’ Parmar analyzes the current legitimacy crisis of the U.S. elite, which, according to him, is rooted in the neoliberal political-economic model adopted in the 1970s to shore up the American elite power.

Islamophobic attacks have recurrently shaken up the people living in the U.S. making Islamophobia one of the hottest issues of recent years. Tracing the roots of Islamophobia since the emergence of Islam, Sunar, in his commentary analyzes how the otherization of Muslims in the U.S. has played a crucial role in Trump’s electoral campaign –therefore in his victory– and how this has affected the lives of those living in the U.S.

Meanwhile, Kardaş in his research article addresses a topic, which deserves a special attention even after ten months have passed since the Presidential election in 2016. Examining the personal, cultural and structural factors that led to the victory of Trump, Kardaş provides a framework on which the shifts of the U.S. policies can be understood.

As mentioned previously, besides the U.S. internal affairs, this issue deals with critical international affairs that require special attention on the verge of the latest developments in global affairs. At a time when the relations between U.S.-NATO and U.S.-Europe are not at their best, Mustafa Kibaroğlu and Tom Sauer make the case as to why the U.S. tactical nuclear weapons in Europe should be removed. By calling upon Trump to remove these weapons from Europe, Kibaroğlu and Sauer suggest a possible scenario by which this could be successfully achieved.

Moving further to the East, Andreas Krieg and Samuel Kim focus on the U.S. policies on the Middle East and China, respectively. Arguing that in the Middle East, the U.S. has been degraded from a superpower to a primus inter pares, Krieg contends that the Trump administration will be forced to continue Obama’s policy of delegation and multilateralism.

Samuel Kim analyzes the U.S.-China relationship with regard to North Korea. According to him, Pyongyang’s nuclear strategy has been significantly shaped by the perceived U.S. nuclear existential threat since the early 1950s. Moreover, Kim argues that in order to avoid any future conflict, there is a need to follow a common-security approach that relies on recognizing the interrelations and interdependencies among countries, and that Washington must reassess moral and practical implications of its policy on the issue of nuclear weapons.

This issue comes with six off-topic pieces, three commentaries and three research articles, which cover some of the latest developments in the world. The emergence of right wing populism in the West has become a threat for the Western liberal order. Majid KhosraviNik, in his commentary, by taking into consideration mainly the Brexit and 2016 presidential elections in the U.S., analyzes the roots of the electoral shifts towards right wing populist parties and groups.

In July 2017, Palestinian people showed the world that when united, they can stay strong and achieve victory, despite any injustice or restriction imposed on them. Close to turning into a third Intifada, the latest clashes between the Palestinian people and the Israeli forces regarding the restraints imposed on the entrance to al-Aqsa Mosque, are discussed thoroughly by Abdallah Marouf Omar.

At a time when the supremacy of the U.S. is being questioned, China is proposing projects that, if successful, will have a global impact. One of these projects is the Belt and Road Initiative. Talip Küçükcan discusses the major challenges and opportunities of this project for the Middle Eastern countries and proposes several policies for its effectiveness.

After the Arab spring, most of the countries affected by the events, were unable to return to their former stability and development. This can be best understood with the Libyan crisis. Emrah Kekilli’s article investigates the Libyan case by taking into consideration the actors involved in the crisis, the causes, bottlenecks and the positions of regional and international actors. Lastly, Kekilli argues that Khalifa Haftar and his supporters have in fact caused the crisis in Libya to deteriorate further and that there may be a possibility to solve the crisis but only if the international actors were to support the Presidential Council.

Adem Çaylak and Güliz Dinç provide a very interesting study by comparing what they call “secular” Kemalism and Gülenism, which is referred to as “religionist” Kemalism by the authors. The last article is that of Hamza Preljević, which focuses on the role of the religious communities in building peace and trust among conflict-divided societies, by taking as a specific case the Islamic Community in Bosnia and Herzegovina.

For a long time now, Donald Trump and his desire to reconstruct and change the U.S. have been the focus of many including scholars, policy makers and journalists. This issue of Insight Turkey aims at contributing to the academic literature by focusing on some of the hot topics that surround the Trump administration. We trust that our readers will find this issue informative and constructive!