The European Union is a success story. It brought enemy countries together, combined their powers, fostered economic and social development, successfully competed with the American market and also resisted against the Soviet expansionism. As the most developed supranational international organization in modern history, the EU maintained Europe at the center of world politics. With the end of the Cold War, the member states attempted to transform the organization from an economic institution into a political and military structure having the ultimate goal to create a federal state-like institution. However, after unexpected changes in the global system and the emergence of new political actors, the EU began to experience many difficulties. 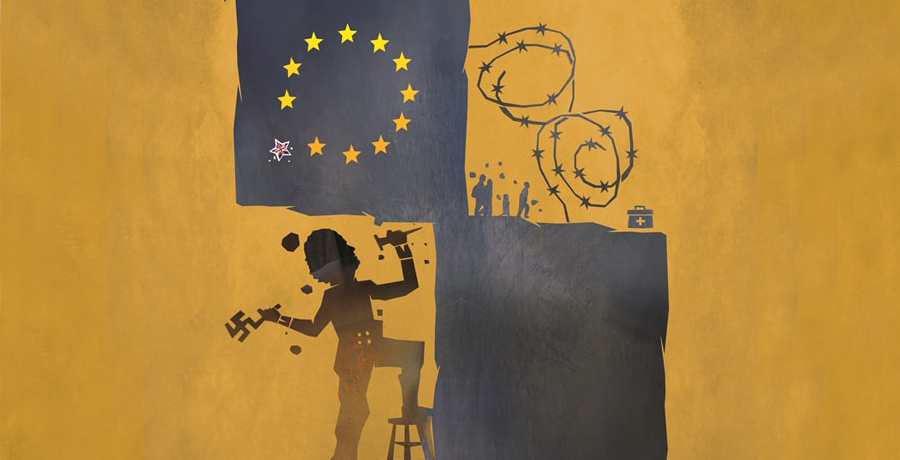 The European Union is a success story. It brought enemy countries together, combined their powers, fostered economic and social development, successfully competed with the American market and also resisted against the Soviet expansionism. As the most developed supranational international organization in modern history, the EU maintained Europe at the center of world politics. With the end of the Cold War, the member states attempted to transform the organization from an economic institution into a political and military structure having the ultimate goal to create a federal state-like institution. However, after unexpected changes in the global system and the emergence of new political actors, the EU began to experience many difficulties.

As a result, today the EU is in a political deadlock and it seems that the continental unity achieved by the EU has begun to shatter. The reasons behind this are several.

First of all, increasing illiberalism and authoritarianism in the West began to threaten the main liberal values that provide the expedient environment for social development and also for peaceful coexistence. The increase of xenophobia, racism, fascism, ultra-nationalism, and anti-Islamism uncovered the illiberal European traditions. As a result we now witness a division not only between Europeans and non-Europeans, but also between Europeans themselves. Namely, there are many fault lines, which divide and alienate the European countries from one another. For instance, there is an increasing friction between relatively robust economies of the north and volatile economies of the south.

Second, the member states of the EU have lost their common other/enemy. Throughout the Cold War most European countries stood behind the U.S. in order to struggle against all global and regional threats such as the spread of communism and the expansionism of the Soviet Union. However, today European countries have different national priorities. For instance, while some European countries have begun to spend more in their defense budget, others refuse to increase their defense allocation and continue to prioritize economic development. A similar division can be seen in terms of the stance towards Russia.

Third, the future of the EU is closely associated with the future of NATO. Maintaining the unity in military and security issues requires cooperation in other sectors, especially in the economy. Many European countries are not happy with what the U.S. does regarding NATO. The Trump Administration has been following a nationalist, unilateral and therefore conflictual economic policy towards Europe. Considering the European trade surplus with the U.S, Trump declared Europe “as bad as China.” These developments have further deepened the gap between the EU and the U.S.

Fourth, the EU institutionalization was at its peak after the collapse of the Cold War system and the EU enlargement towards Eastern Europe. Nevertheless, it faced important challenges stemming from new topics such as defense and foreign policy, and the accession of possible new members. Following the accession of Eastern European states, the gap between the most advanced members and relatively less developed states widened. Consequently, the EU lost its attractiveness for many European states and the British, who did not want to share the burden of other member states, decided to leave the EU. This was the first step towards disintegration of the EU and this backward tendency will most probably continue.

Fifth, due to increasing shallowness and mediocrity, European politics has lost its visionary outlook and strategic depth. The new generation of European politicians on the whole lack the visionary outlook of the previous generations. They are trapped in conjuncture and populist policies with short-term concerns or gains. That is, they just try to save the day. This new political elite in Europe does not believe in EU values such as pluralism and the win-win strategy. Some EU members are reluctant to share the burden of other members. Southern tier EU countries have been experiencing economic problems and struggling against the influx of refugees, but the northern tier countries are relatively free of these problems and do not want to import these issues into their domestic politics.

Last but not least, European countries have been otherizing migrants and foreigners. In this context Turkey has been considered as the main ‘other’ for many years. It seems that when it comes to Turkey, the EU institutions and member countries freeze most of their differences and problems, and prioritize Turkey’s domestic and foreign developments. The new generation of politicians welcomes the increase of ultra-nationalism, fascism, racism, xenophobia, anti-Islamism and anti-Turkism. Even mainstream politicians have begun to normalize this tendency and as such the animosity against Islam and Turkey is becoming widespread all over Europe.

With these in mind, this new issue of Insight Turkey aims at providing a general framework regarding some of the most important issues that have a direct impact on the future of the EU, including here: German hegemony after Brexit, cyber security, EU relations with Turkey and the U.S. and the rise of the radical right.

Simon Bulmer’s commentary focuses on the sources of German hegemony within the EU after Brexit to later suggest two possible scenarios, namely the Franco-German partnership’s revival or a form of German hegemony. André Barrinha, in his commentary, touches upon a very interesting topic that has gained a lot of importance lately. Cyber security has emerged as the focus of many western organizations, especially for the EU as they perceive Russia as a direct threat in cyberspace. In this context, Barrinha analyzes the response of the EU to the Russian threat and its effectiveness.

Trump’s arrival has created a lot of chaos in the world and we witness the decomposition of liberal values every day. In such an environment, U.S.-EU alliance is facing many difficulties and the cracks are becoming more visible. Kılıç Buğra Kanat has presented a brief analysis on the transatlantic relations and contends that unpredictability is now considered the defining characteristic of the U.S. attitude toward Europe. Remaining within the context of the transatlantic relations, Şafak Oğuz’s article focuses on the missile defense system of NATO, entitled the EPAA and argues that it is one of the key regional missile defense projects for the U.S., which claims to protect Europe from the Iranian ballistic missile threat but actually is designed to protect the American homeland, and targets Russian Intercontinental Ballistic Missiles with nuclear warheads.

The standoff in the Turkey-EU relations has been present for some years now. By focusing on the topic of the customs union, Ciğdem Nas and Serdar Altay, present a brief analysis and suggestions for a possible new agreement between Turkey and the EU. In her commentary, Çiğdem Nas, contends that the upgrade of the customs union could bring a breath of fresh air to Turkey-EU relations and reignite the process of Turkey’s gradual integration into the EU. While arguing on the necessity of the upgrade of the customs union, Altay states that since membership is no longer an option, the sole contractual framework that will bind Turkey and the EU for the foreseeable future will be an upgraded customs union.

As mentioned above, the rise of the far right constitutes a serious threat to European unity and as a result, to the EU itself. In the light of this, Aristotle Kallis addresses the EU’s policies toward the rising far right and argues that the EU needs to take into consideration the causes of citizen resentment without adopting the language and logic of the right wing populists. The article of Sertan Akbaba provides a more detailed analysis of the now dominant discourses in Europe used by the leaders of the far right parties, mainly in Netherlands, Finland, Italy and Hungary.

The main targets of these populist discourses have been the Muslim people living in the European countries, for this reason in this issue we bring to our readers two compelling perspectives. On the one hand, Pamela Irving Jackson and Pete Doerschler provide qualitative and quantitative evidence of European identification by Muslims in France, Austria and the Netherlands as a response to the far right political mobilization. On the other hand, Enes Bayraklı, Farid Hafez and Léonard Faytre evaluate how the governments in Austria, France and Germany have tried to assimilate the Muslims living in these states via specific laws and institutions. According to them, the underlying message of these policies is the fact that European states consider the Muslims a security threat to the state and society.

The weakening and defeat of ISIS will ironically have a negative impact on European security. This is what Kyle Orton has argued in his article. After providing a detailed analysis of the terrorist organization PKK and its offshoots, Orton explains how the foreign fighters that fought in Syria against ISIS are now going back in their homelands, mainly Europe, becoming a serious threat to its security.

Hakan Samur in his article evaluates the stance of the Kurdish people living in Turkey towards Turkey’s membership of the EU. Based on the research field that the author has conducted, Samur concludes by saying that while the Kurds are somewhat distrustful and skeptical toward the EU, they continue to support EU membership.

The Balkans is one of the most important regions within Europe and it has a direct impact on European security, economy and policies. However, for a long time people living in this region have fought each other. In response to this, Mirsad Kriještorac, in optimistic tones, argues that in order to move past the enmity that has characterized the Balkans, it is necessary to display the region’s religious and ethnic diversity as an inherent quality, and a building block of cooperation and progress.

Lastly, this issue of Insight Turkey brings an analysis of the June 24 elections in Turkey from the pen of Fahrettin Altun. After approximately one year since the Turkish people approved the transition to the presidential system in the April 16 referendum, in a consolidated majority Recep Tayyip Erdoğan became the first president of the new Turkey. For those interested in Turkish politics, Altun’s commentary provides a general background to the new presidential system, the electoral campaign of the parties that participated in the elections and the impact that the results of these elections will have on Turkish politics.

In conclusion, internal and external threats have weakened the EU and its political discourse of pluralism and peaceful coexistence. Furthermore, continental and global conjunctures are also at work against the principles of the EU. For this reason, it is possible that one questions the effectiveness and future of the EU. We are confident that this issue of Insight Turkey provides in depth information on important issues that are directly related to the EU and should be read carefully by anyone interested in the EU policies and its future.