On November 30, 2006, Catholic Pope Benedict XVI made a historic visit to the Sultan Ahmed Mosque in Istanbul. The Pope’s historic visit to what tourists call the “Blue Mosque" was designed to symbolically ameliorate tensions caused by the Pope’s controversial speech a few weeks prior in Germany.

On November 30, 2006, Catholic Pope Benedict XVI made a historic visit to the Sultan Ahmed Mosque in Istanbul. The Pope’s historic visit to what tourists call the “Blue Mosque" was designed to symbolically ameliorate tensions caused by the Pope’s controversial speech a few weeks prior in Germany. During the visit to the mosque, the Pope turned toward Mecca and gave a silent prayer for two minutes. As he and his entourage began leaving the mosque, the Papal leader pointed to an inscription on a wall and asked for the translation of the phrase written there, which was "A merchant is the beloved of God" or “al-kasib habiballah” (p. 12).

This historic moment is used in Vali Nasr's book Islamic capitalism to illustrate the point that Islam has deep entrepreneurial roots. The revival of this spirit he argues is the most important trend in the modern Muslim world. The growth of a new Muslim middle class he believes will both undermine terrorism and dissipate the influence of radical Islam on political discourse in the Muslim world.

Vali Nasr, an Iranian-American professor at Tufts University in Boston, argues that during the second half of the 20th century several Muslim countries underwent an impressive transition from closed and statist economies to more open and liberal economies. This new Muslim middle class is rising in the Gulf, Turkey, Southeast Asia, and elsewhere in the Muslim world by embracing the global economic order. Nasr’s book omits, perhaps, the rapidly growing Muslim middle class amongst Muslim diaspora groups in the European Union and North America, which may in fact be the fastest growing of them all. Regardless, Nasr argues that the attitudes of this new bourgeoisie are both pious and materialistic. He specifically highlights Turkey in his book as one of the most successful examples of this.

Extremism, and the political chaos it breeds, is bad for business. As a result he argues that this ideology is being brushed aside across the Muslim world. In a dramatic example, Nasr points out that during the Algerian Civil War (1991-2002) shopkeepers who were funding the insurgency grew tired of the ongoing civil war as it was bad for business (p.168).

While there is great work being done on Islam and economics, rarely is it found in such a readable format such as this one. This might be changing. In the context of the so-called "Arab Spring", the rates of youth unemployment, internet penetration, and economic growth are being included in reports and writings on the region. Additionally, the successes of Turkey have made it clear that the economics of the region goes far beyond the measurement of barrels per day of petroleum production.

This new Muslim middle class is not a reaction to Muslim extremism but a reaction to “Kemalism”. The vision of Turkish leader Mustafa Kemal Ataturk, according to Nasr, was one of statist economics and hyper-secularization. This had prolonged consequences in holding back the region as Nasr notes: “In the Middle East, by contrast, after a promising start in the early twentieth century, the middle class was largely the product of the state, and it forfeited its role as the vehicle of liberalization, opting instead for state patronage. This was a tragic legacy of Kemalism” (p. 112).

In Kemalist states the military enforced secularism and “stifling conformity” on Muslim societies the author argues. Kemalism took many forms in the Middle East, from Shahist Iran to Abdul Gamal Nasser’s Egypt. The most recent and curious case from the Muslim world is maybe that of former President Pervez Musharraf of Pakistan.

There is no doubt that Musharraf saw himself as the next great Kemalist reformer. Musharraf spent much of his childhood in Turkey and it is clear the country left a lasting impression on him. To this day Musharraf still speaks some Turkish and is a fan of Besiktas, the legendary Istanbul football club. While president of Pakistan (2001-2008) and afterwards, Pervez Musharraf often mentioned the Turkish leader in his speeches.

There were those in the international community who were willing to make this comparison as well. A 2007 New York Times article gushed that Musharraf was “[In] his swagger, his eagerness to pull Pakistan into the Western orbit of power, he is reminiscent of the legendary Turkish leader.”[1] But Pakistan had Kemalist tendencies long before Musharraf took the reins of the nuclear-armed state. Pakistan, as Nasr points out, has been more or less dominated by the military since 1958.

Vali Nasr’s argument that support for “Islamic” states is passé will be put to the test in the coming months as the peoples of the Arab world begin to form new governments and hold elections. Nasr believes that only with a strong middle class will democracy develop firm roots in the Muslim world. Vali Nasr quotes the scholar Barrington Moore Jr. who famously stated, “No bourgeois, no democracy” (p. 112). Yet, in 1930s Eastern Europe and in Latin America during the Cold War the bourgeois class has at times courted authoritarianism rather than democracy. Global polling shows attitudes toward democracy are waning amongst the global middle class.

There are some slight errors in this slender book. For example, some would translate “kasib” not as “merchants” but rather as “wage earners.” But, these errors in no way detract from the strength of Nasr’s efforts. In 2009 the book was originally published under the unfortunately obscure title of The Forces of Fortune. The Council of Foreign Relations, which printed the book through its publishing arm, has aggressively promoted the text and launched the book with events and conference calls designed to raise awareness of the title. Going even further the text was rebranded and re-released under such titles as Islamic Capitalism (2010). Clearly, Nasr’s publishers are aware that this text is at least an equal accomplishment as his 2006 work on the Shia Revival. 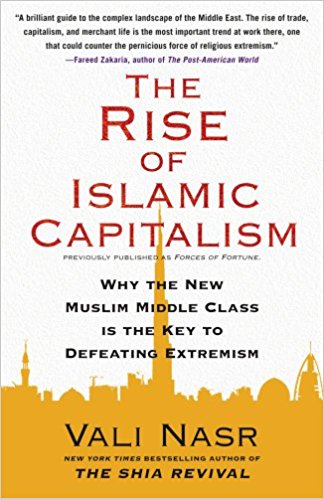