When analyzing Islam and democracy, pundits and scholars have tended to focus on Arab-majority countries, all of which are authoritarian. This special issue brings a new perspective into the debate by analyzing non-Arab Muslim democracies in addition to Muslim democrats in some Arab countries. Besides empirical analyses, this issue also includes theoretical discussions on diverse political interpretations of Islam and the role of Islamic discourses in a democratic polity. 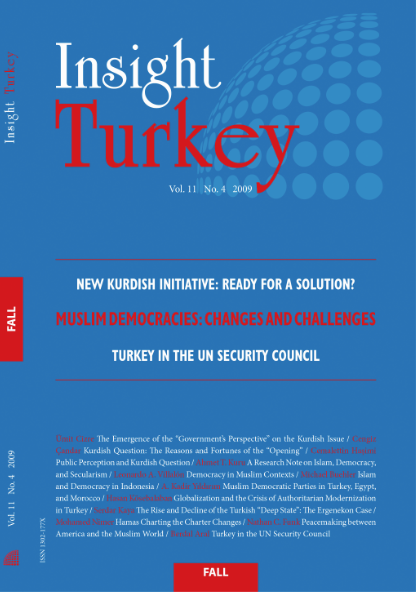 When analyzing Islam and democracy, pundits and scholars have tended to focus on Arab-majority countries, all of which are authoritarian. This special issue brings a new perspective into the debate by analyzing non-Arab Muslim democracies in addition to Muslim democrats in some Arab countries. Besides empirical analyses, this issue also includes theoretical discussions on diverse political interpretations of Islam and the role of Islamic discourses in a democratic polity.My essay reviews the argument that the alleged lack of secularism, due to the mixture of the state and religion, has made Muslim countries authoritarian. I criticize this argument, stressing that among 46 Muslim-majority countries, 20 are secular states and two-thirds of these secular states are still authoritarian. Leonardo Villalón’s essay examines three secular Muslim democracies in sub-Saharan Africa—Senegal, Mali, and Niger. He emphasizes the importance of accommodating Islamic discourses in public debates both as a requirement of democracy and as a way of encouraging diversification (and moderation) of Muslim political voices.

Michael Buehler explores Indonesia—a democratic country which has the largest Muslim population in the world. He explains the weakness of Islamist parties through de-centralized Islamic authority in civil society, weakly institutionalized party system, and recent institutional reforms that have further fragmented Islamist parties. Buehler argues that these three structural factors are more important than the so-called “moderate Indonesian Islam” in shaping the contained role of Islamism. A. Kadir Yıldırım analyzes the various degrees of success of recently formed Muslim democratic parties in three countries. In Turkey the AK Party has been the ruling party, in Morocco the PJD has had limited electoral success, and in Egypt the Wasat Party has been a marginal political actor. Yıldırım uses the diverse levels of competitiveness in these countries’ economic liberalization reforms to explain these variations. Hasan Kösebalaban also examines the rise of Muslim democratic actors in Turkey, as well as the evolution of the ruling elite’s secularist and authoritarian ideology. According to Kösebalaban, a pro-Islamic bourgeoisie has emerged in Turkey as a pro-globalization force. Yet, several secularist actors have become anti-globalization and anti-Western, because globalization has challenged their bureaucratic modernization and authoritarian ideology.

Additionally, this issue includes essays on two main barriers to democratic consolidation in Turkey. One barrier is the persistence of direct or subtle military interventions, which has been substantially challenged by the recent Ergenekon case. In April 2006, an assassin shot Council of State judges who had decided that it was inappropriate for a teacher to wear headscarf even on the street. Several secularist generals, politicians, judges, and media pundits presented the incident as an act of “Islamic terrorism” and held AK Party government responsible. Later, the police discovered evidences that linked the assassin to a “deep-state” ultranationalist organization led by retired military officers and known as “Ergenekon.” A series of indictments depicted Ergenekon as the perpetrator of several other key assassinations. More than 200 civilians and military personnel, including former generals, were arrested. Meanwhile, a group within the military has continued preparing plots against the government, as recently leaked to the media. The general staff have in vain tried to cover up the plots. The final verdict has yet to be made, but the Ergenekon case has already marked Turkish politics by destroying the “untouchable” image of the military and revealing its fabrication of the so-called threat of “Islamist reactionism” as an excuse for intervention to politics. Serdar Kaya’s article is an important analysis of the Ergenekon organization by defining it as a rent-seeking interest group, using Mancur Olson’s theoretical framework.

The second barrier against democratic consolidation is Turkey’s Kurdish question. In 2009, the government took some steps forward to solve this problem, including the opening of a public TV channel broadcasting in Kurdish language (TRT Şeş), Prime Minister Tayyip Erdoğan’s meeting with the pro-Kurdish DTP’s leader Ahmet Türk, and the returning of 34 PKK members from Iraq to Turkey without any prosecution, in addition to Turkey’s increasingly strengthening relations with the Kurdish leaders of northern Iraq. Three significant commentaries written by Ümit Cizre, Cengiz Çandar, and Cemalettin Haşimi analyze this historical process.