Two years ago the Arab Middle East was shaken by popular uprisings. The events have resulted either in regime change or reforms in some countries, and oppression and violence in others. At the outset the uprisings, which stretched from Tunisia to Libya, Egypt, Yemen and Syria, were hailed as the beginning of a new era in which people power will reign in the Middle East. 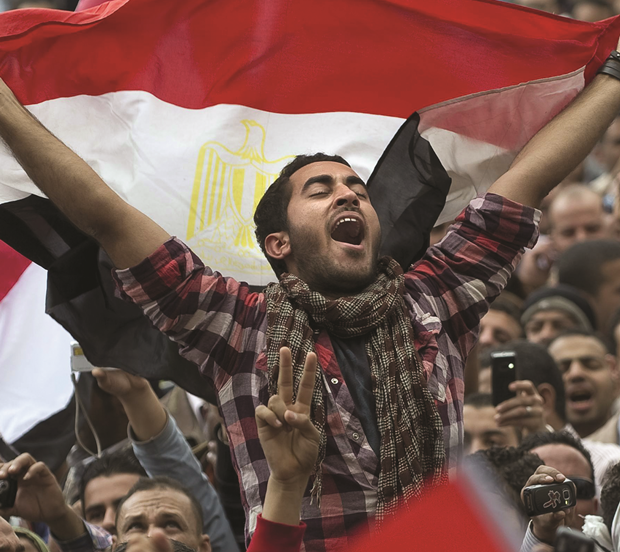 Two years ago the Arab Middle East was shaken by popular uprisings. The events have resulted either in regime change or reforms in some countries, and oppression and violence in others. At the outset the uprisings, which stretched from Tunisia to Libya, Egypt, Yemen and Syria, were hailed as the beginning of a new era in which people power will reign in the Middle East.

Now after two years some doubts have started to be expressed about the process and direction of the change. The Arab Spring has given way to competitive elections, plural political parties and free public debates in Egypt, Tunisia and Libya, yet in Syria it has led to violence, bloodbath and utter destruction.

What we have witnessed in Syria over last two years point to the limits, or at least the costs, of regime change by violent uprisings lightly supported by external actors. It also shows the capacity of the world to bear humanitarian crises. So far it is estimated that around 50,000 people have been killed in Syria, 600,000 have fled to neighboring countries, mainly Turkey, Jordan and Lebanon, and millions are internally displaced. Syria is a country in shambles. War planes of the Assad regime are bombing towns; their tanks shelling the people.

It seems that the Assad regime is consuming itself with violence inflicted on its own people, but the question today is even when the regime gone what will remain of Syria? It is feared that a post-Assad Syria might plunge into another round of civil war. From a Russian perspective Dmitri Trenin of the Carnegie Moscow Center points out this in his commentary: “When the Russians look at Syria at the beginning of 2013, they are focused not so much on the survival of the Assad regime, which they consider essentially doomed, as on the ‘Day After,’ which appears to them as a huge bloodbath and utter chaos.”

It seems by now that the main beneficiaries of the Arab Spring have been the Islamists. As Katerine Dalacoura of the London School of Economics explains while the uprisings have provided the Islamists with some new opportunities it “may have de-legitimized radical Islamist groups because they showed that political change can come about through people power, not violence”.

The question is whether “people power” will turn into institutionalized democracy in the post-Arab Spring countries. This depends to a large extent on the vision and wisdom of the political actors who are competing for power in the aftermath of the regime changes. In recent months Egypt has sent rather mixed signals about the capacity of its political actors to build a working plural democracy despite the adoption of a new constitution.

Recognizing that “regime change” is still incomplete Taha Ozhan of the SETA Foundation suggests that “if Egypt has to choose between the ‘growing pains of democratization’ or the ‘military-judiciary tutelage,’ it should not hesitate to pick the first option”. His reasoning is based on a prediction that the “first option offers an exit out of what we may call ‘political turbulence.’ The second option, on the other hand, which we may call ‘bureaucratic oligarchy,’ may clear the path to a Mubarakism that Egypt would be sentenced to for years to come.”

Egypt is indeed the test case, and it has tremendous demonstration effects in the region for the prospects of the Arab Spring to result in stable and plural democratic regimes. This, according to Marina Ottaway of the Woodrow Wilson Center, largely depends on the presence of powerful social and political actors who are capable of deterring the new regime from turning authoritarian: “If secular parties obtain creditable results, even short of winning the majority, there is still hope that the transition will eventually lead to a democratic outcome. If secular parties suffer a resounding defeat, as they did in early 2012, the battle will probably move to the streets, with unpredictable results.” But she does in fact predict a potential result: “Egypt may well slide into a new authoritarianism, punctuated by street protest and violence”.

The prospects for a stable and plural democracy in the Middle East will be a lively debate that we at Insight Turkey will continue to analyze in our future issues.

As you may have noticed by now Insight Turkey has a new design. Without sacrificing the quality of the content we have tried to make the journal more attractive and reader friendly. We will continue to combine policy relevant commentaries with in-depth academic analyses and book reviews. Insight Turkey remains a valuable reference for diplomats, journalists, academics, business persons, politicians as well as just readers who are interested in understanding the events taking place around them. All our readers will continue to find insightful analyses on global events and trends in a more smiling journal.

The “new” Insight Turkey broadens its scope of interest to cover areas going beyond Turkish politics and foreign policy. It will not be merely a “Turkish” Insight but a “global” Insight. We very much hope you will like it.