A New York Times correspondent in Egypt, David Kirkpatrick focuses his book Into the Hands of the Soldiers on the 2011-2013 Egyptian revolution, the occurrences after the collapse of the authoritative regime of Hosni Mubarak, and the reasons behind the Arab Spring in the Middle East, specifically in Egypt. At the center of the conflict in Egypt between state and public, there is an army that controls the whole process of power transformation.

A New York Times correspondent in Egypt, David Kirkpatrick focuses his book Into the Hands of the Soldiers on the 2011-2013 Egyptian revolution, the occurrences after the collapse of the authoritative regime of Hosni Mubarak, and the reasons behind the Arab Spring in the Middle East, specifically in Egypt. At the center of the conflict in Egypt between state and public, there is an army that controls the whole process of power transformation. Moreover, according to Kirkpatrick, the power shift from state to public with Muhammed Morsi, and from public to state again after the military coup of Abdel Fattah el-Sisi, are important political issues which clearly disclose the failure of the democratic experience in Egypt. Kirkpatrick discusses the Americans’ involvement since the revolution began, specifically the efforts of John Kerry, Ben Rhodes, Hillary Clinton, and then President Barack Obama to control Egypt due to Egypt’s role in the Middle East and for the security of Israel in the region.

The democratic process in Egypt failed with the new military coup, and the U.S. took the side of the soldiers, defining the military involvement in politics as the process of democratic amelioration. However, the positions and capacities of Egyptians from various segments of society, both secular and non-secular, including the Muslim Brotherhood, Coptic Christians, and nationalists in this awakening cannot be disregarded due to the fundamental changes that occurred at the beginning of the revolution in Egypt. The problem emerges when it comes to the military coup of Sisi –namely that the same resistance was not shown by some groups that had united at the beginning of the Revolution in 2011, particularly among the liberals of Egypt. The author asserts that Egyptian liberals approved the military coup due to the doubtfulness and unpredictability of the Muslim Brotherhood and the Morsi Administration.

Kirkpatrick’s book contemplates the issues informing the Egyptian power transformation in politics through a narration of the author’s personal experiences in the region, rather than an examination of the Arab Spring from other sources that have been written. The author’s personal observations and collected knowledge from attendees of the Egyptian revolution and officials provide us with direct information on the issues, which can be beneficial for better understanding the situation rather than interpreting the Arab Spring in retrospect. Moreover, Kirkpatrick’s closeness to Egyptian writers and politicians make his work more objective in terms of the variety of information that he gathered during the Egyptian revolution. For instance, when he talks about Hosni Mubarak’s son Gamal Mubarak, he gives the name of Gamal Mubarak’s friend Tamim Khallaf to support his claims about whether or not Gamal desired to be president after his father in Egypt.

Although the book features a contemporary account of the revolution, additional background would have been helpful in providing a context for the current state of affairs. A short synopsis of the colonial era of Egypt, and the ways in which it generated a particular state and army structure that affected the governance of Egypt during the post-colonial era needs to be highlighted in order to see the entanglement of these factors with contemporary issues. The Egyptian army, liberals, nationalists, and the Muslim Brotherhood challenge each other because of the differences that were embedded in Egyptian society during the colonial era. Despite the fact that the author repeatedly touts the idea of American military aid to control Egypt, the differences and divisions in Egyptian society should be reflected historically and discussed with regard to their conducive and detrimental effects on that society, so that the Egyptian revolution and military coup can be understood more broadly.

In this work, interpretive study is mostly used to analyze the different ideological and religious groups’ resistance to and support of the army in order to disclose the situation in Egypt. The author captures a moment that reflects the diversity of Egyptians in Tahrir Square, and he specifies the roles of a variety of groups in the revolution, for instance, Coptic Christians, women’s organizations, the Muslim Brotherhood, liberals, and nationalists. The involvement of all ages, from young to old, in the beginning of the uprising helped ensure the success of the revolt and the removal of the existing president Mubarek from power.

The book’s focus on the Rabaa movement and the democratic resistance to the military power that dismissed the democratically elected president Muhammed Morsi is not very reflective of the situation in terms of democratic desires for Egypt, but Kirkpatrick still captures an important point while he elaborates on the Rabaa movement’s resistance in al-Adawiya Square and al-Nahda Square during the police and army attacks on protesters. His evaluations of the resistance after Sisi’s coup recognize it as a symbol of the desperation for democracy, where hundreds were killed by the police and army, while Tahrir Square was a symbol of the revolution against Hosni Mubarak for those who desired real democracy for Egypt. Apparently, more sociological and political analyses are needed to examine the shift of the public mind in both situations.

Kirkpatrick thoroughly analyzes the duality and uncertainty of U.S. policies in Egypt between the Obama Administration and the intelligence service. At the beginning of the uprising, Obama insisted that Mubarak should make reforms for the country. Then he suggested that he should leave the power for a smooth transition and regime change. Obama made similar contradictory statements when Sisi took over power in Egypt. He said, ‘Morsi was democratically elected’ (p. 241), and then he changed his mind and by followed the CIA’s lead in supporting the military coup. Michael Morrell, deputy director of the CIA, said, ‘Morsi was leading the country to ruin, to instability, and to extremism. Now Egypt has a chance again’ (p. 242). These were two different situations and two different responses by the United States. On one hand, the United States took a position on the side of the democratic revolution; then, the country took a position on the side of the military regime. The contradictory positions are delineated by the author. Kirkpatrick does not delve deeply into American policy, however, he does question these dual policies. He elaborates on the issue of Israel’s security in some chapters, saying that who governs Egypt is important to Israel. However, the relationship between the military coup in Egypt, the security of Israel, and the roles of the Americans in this triangle are not elaborated on very much.

Into the Hands of the Soldiers is a significant and well-informed book about the Arab Spring and the Egyptian revolution, satisfactory for everyone with an interest in the struggles with democracy in Egypt and the Middle East, American-Egypt relations, the Muslim Brotherhood and its role in Egyptian politics, the role of the secular Egyptian Army in politics, and societal and ideological differences in Egypt. It is a motivational book with some strong evidence and analyses relating to the failure of the Arab Spring and the Egyptian revolution. Into the Hands of the Soldiers is beneficial for readers as it can help them come to understand the difficulties in the transition from an authoritarian system to a democratic state, and the role of outsiders, which must be taken into consideration during the transition to democracy. 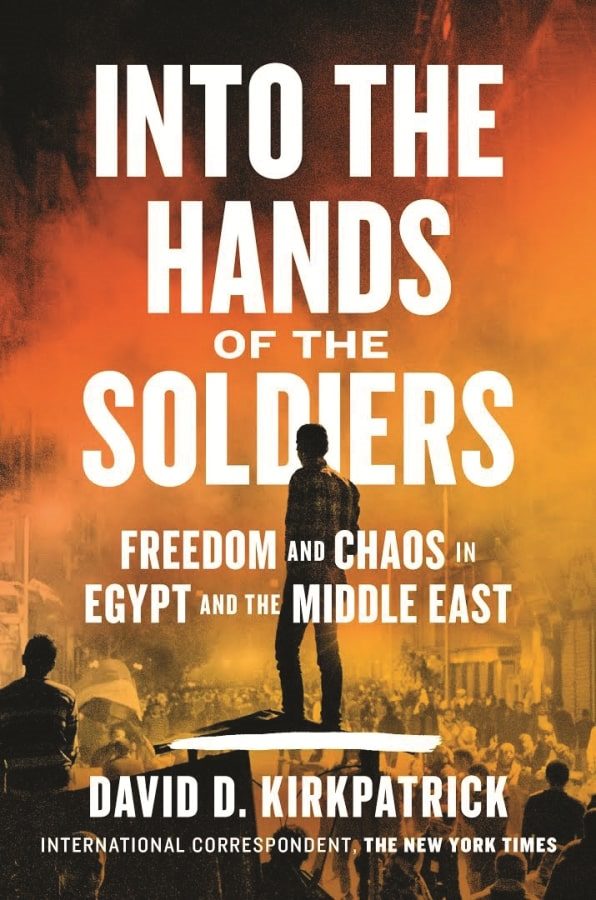