The Broken Olive Branch: Nationalism, Ethnic Conflict and the Quest for Peace in Cyprus

The Broken Olive Branch is a two vol- ume book wherein the author analyses the Cyprus question through the prisms of ethno nationalism. In the first volume, through his interpretation, the author eval- uates the historical origins of the Cyprus issue. According to the author, the uncriti- cal adoption of ethnocentric nationalism is an fundamental factor in evaluating this conflict.

The Broken Olive Branch is a two vol- ume book wherein the author analyses the Cyprus question through the prisms of ethno nationalism. In the first volume, through his interpretation, the author eval- uates the historical origins of the Cyprus issue. According to the author, the uncriti- cal adoption of ethnocentric nationalism is an fundamental factor in evaluating this conflict. The author points to the impor- tance of the physical separation of the two communities on the island since 1964. The author argued that the Greek Cypriot na- tionalist aspiration of establishing a union with Greece (Enosis) and the Turkish Cy- priot aspiration for the ethnic partition of Cyprus created the outcome of a divided island. Greek Cypriots wanted to establish a Hellenic state in which the Greeks of Cy- prus would secure state power for them- selves alone. Turkish Cypriots also aimed to have a territorially separate Turkish state in which they would have monopolized state power. (vol 1, p.44-45) While explain- ing the historical reasons of the division of Cyprus, the author underestimated the suffering of the Turks of Cyprus from 1963 to 1974 during which Turks were attacked, killed, and forced to leave their homes. In fact the alienation of Turkish Cypriots goes back to 1955 when the EOKA started its armed struggle for union with Greece (Enosis). However, even before that date problems existed between the two communities. The author argued that it was not until the 1990s that Turkish and Greek Cypriots began to overcome nationalist ra- tionals with direct citizen based contacts. Through these initiatives members of both communities shared their experiences and this helped to overcome prejudices. The author acknowledged the difficulties of di- rect dialogue, since there are issues that led to a breakdown of communication. Both communities’ perception of certain events is quite different. For example, the author indicated that the Turkish side considered the Turkish Republic of Northern Cyprus a historically justified, legitimate indepen- dent state, while the Greek side consid- ered it as an illegitimate breakaway state. While Greek Cypriots claimed the right of refugees to return to their homes, Turk- ish Cypriots considered it as an attempt to retake the northern territory, leaving the Turks without shelter. (vol.1, p.155-56) These differences of opinion on key issues were reflected in the endless nego- tiation process, which the book explains in detail. For example, the author states that the Greek Cypriots approach to the politi- cal settlement is based on the foundations set up by the Republic of Cyprus of 1960. The Greek side wants to maintain a strict legal continuity of the current state to any future settlement. (vol. 1, p. 186) However, for the Turkish side this approach to the negotiations is opposed to a bicommunal and bizonal federation, which it supports. The Turkish side’s arguments are based on the principle that no federation can be at- tained without first recognizing the exis- tence of two state entities of equal legal sta- tus. (vol. 1, p.188) The first volume of the book concluded with the Helsinki Summit in December 1999. The author argued that the summit’s decision to grant Turkey the status of an EU candidate opened the door to a new political environment on the issue of Cyprus. Since Turkey’s candidacy to the EU, the terms of references by which Turk- ish and Greek Cypriots negotiated have changed.

In the second volume of the book, the author explains global trends and the im- pact of the EU as a catalyst for political and civil changes in Turkey and Greece. The negotiation process through the Annan Plan and political realities of the post refer- endum era were discussed in the book.

The impact of globalizing trends began to function as a vital catalyst of socio-polit- ical change, reducing the impact of nation- alistic politics of unilateralism and isola- tionism. While stressing that global trends encourage integration, the author neglect- ed to discuss that global trends of fragmen- tation and etno-nationalism are also very real today. This latter group of global trends may have had a great impact on the Cyprus question, particularly, after the failure of the Annan Plan. As he correctly pointed out the failure to resolve the Cyprus prob- lem (with the Annan plan) was perhaps the greatest political setback in the history of the island. (vol. 2, p. 140) The Annan plan failed at a time when even nationalist Greek Cypriots like Marios Matsakis talked about a two-state solution. (vol. 2, p. 189) Turk- ish Cypriots were very disappointed by the failure of the Annan Plan to be approved by their Greek counterparts. And they may have interpreted this failure as meaning that the Greek Cypriots do not want to live in a bicommunal and bizonal state. Turk- ish Cypriots were also disappointed by the process after the referendum of the An- nan Plan, since despite the Greek side’s ‘no vote’ for the plan, Greek Cypriots became a member of the EU and the comprehensive embargo against the Turkish Cypriots still continues. It should be added here that the Greek Cypriots were rewarded by the EU, while the Turkish Cypriots continue to be punished.

In the two volumes of the book, the au- thor’s objective is to find and evaluate the ways and options in which the two com- munities can live together in the same state. However, in the first volume of the book, the description of the history of Cy- prus and particularly the increase of ten- sions and conflicts since the1950’s would lead the reader to question whether the two communities of Cyprus can run a common state as envisaged in the Annan Plan and other previous UN plans. As the author indicated, in 1963 the Greek Cypri- ots pushed forward constitutional amend- ments aiming to abrogate the 1959-1960 agreements in order to open the way for
‘Enosis.’ It should be noted that besides the Greek Cypriots’ goal of establishing ‘Eno- sis,’ the Greek Cypriots felt that the 1959-1960 agreements were imposed by the in- ternational community and they wanted an out at the first occasion. Realistically, we should acknowledge that any international agreement on the Cyprus question would have to be imposed by the international community. And even if the both sides ac- cept a plan for a solution, there would still be a danger that history would repeat itself. Meaning, that the only reason either party or both would accept a plan would be be- cause of the pressure from major interna- tional powers. Always leaving the possibil- ity open that the unsatisfied side would try and change and/or reverse any potential future agreement.

In the two volumes of the book, the author gave an insightful and comprehen- sive analysis and he showed goodwill in his intention and recommendations for the solution on the questions of Cyprus. If the author had explained and analyzed the im- pact of international developments on the Cyprus question after the post Annan era, the work would have been more thorough and relevant. Because the question of Cy- prus can be compared to the continuing global trend towards separation of certain nations today, like the independence of Ko- sovo. Despite his lack of emphasis on the terror faced by Turkish Cypriots, particu- larly in the period between 1963-1974, and the extreme hardships the embargo con- tinues to impose on Turkish Cypriots, the author did try to objectively understand and evaluate the arguments and positions of Turkish Cypriots. 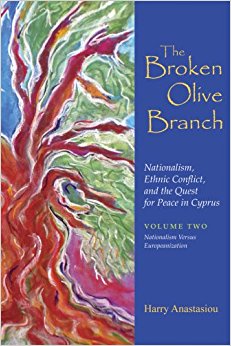 Illegal Migration to and from Libya, the Nigerian Factor and the EU: An Agenda for a Resolution

The New German Coalition and Its Impact on EU-Turkey Relations

Heading Towards the Defining Moment in Cyprus: Public Opinion vs Realities on the Ground