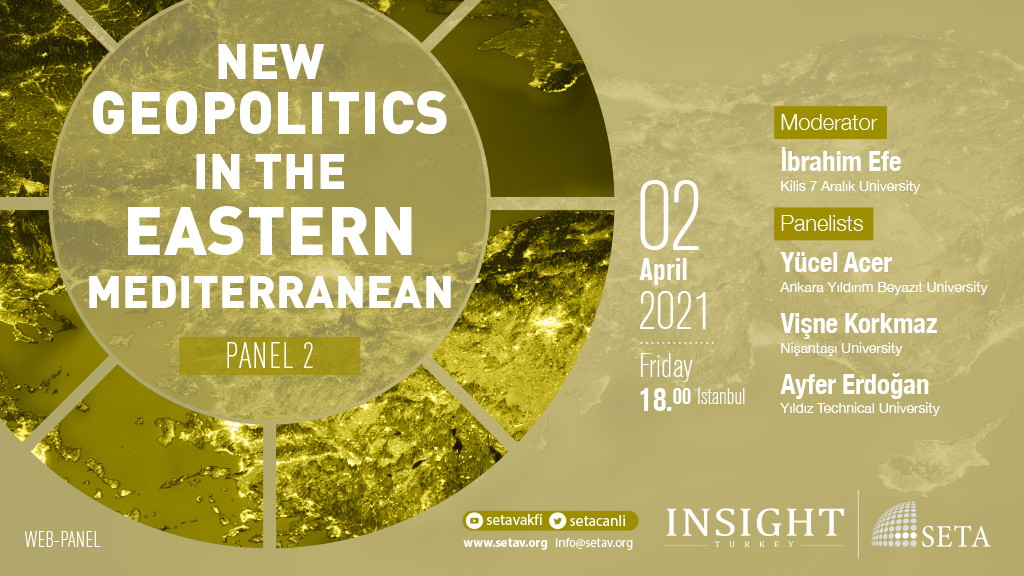 Acer started his introduction by stating the problematic nature of the Mediterranean sea, which being an enclosed sea presents many disputes in maritime border disagreements that can be conducive to potential regional crises and military confrontation. The Eastern Mediterranean area, in particular, is prone to this sort of tension given the presence of many islands as well as the declaration of economic of exclusive economic zones.

The panelist specified that the first agreements regarding maritime boundaries were signed by Greece starting in 2011 and that later on, a flurry of agreements took place in the region. Within this scenario, Turkey needed to respond by criticizing the agreements as well as responding with measures of practical nature, as well as signing her own bilateral agreements with countries like Northern Cyprus and Libya.

Acer concluded by explaining the nature of Turkish criticism of the delimitation agreements taking into consideration especially the presence of many islands within the Eastern part of the Mediterranean, the problematic role that they play in the definition of boundaries as well as why current methods utilized in the definition of maritime boundaries cannot apply to the context of the Eastern Mediterranean.

Korkmaz analyzed the Eastern Mediterranean situation through the lenses of International Relations, looking at both the international and regional levels. According to the panelist, the region is going through a new Cold War, which is caused by great powers’ rivalry in the area and revolves around area-denial and area anti-access capabilities. In this situation, the U.S. seeks to utilize local alliances in order to prevent Chinese and Russian influence from strengthening in the region.

The regional system of alliances that has been formed consists of three of them, which are interest and benefit-based and therefore are more susceptible to change. Korkmaz explained the rising of these alignments as due to several conditions, the energy issue, which sees Israel, Greece, Southern Cyprus, and Egypt as one alignment, the Libyan one which consists of France, UAE, Egypt, and Russia, and lastly the alignment emerging out of the Abraham Accords. According to the panelist, these first two alignments also seek to balance Turkey in the Mediterranean as well as counter Turkish influence in Libya. This regional system of alignments is also used by the U.S. in order to have a cheaper and riskless way of balancing China and Russia, distributing benefits for those who join the U.S. thus allowing for bandwagoning among countries.

Korkmaz concluded by explaining that while the implications of the Abraham Accords have caused a  regional shift and signalled also a partial American retreat from the region, underlining at the same time how this regional system is creating many rivals and balancing not only against powers external to the region but also internal to it.

In the last intenvention of the panel, Erdoğan evaluated the central role of energy independence for the sovereignty of countries, therefore explaining how coastal states have been competing to gain the upper hand in control over these resources. This competition has been caused by the discovery of gas reserves in 2003, turning maritime boundary disputes into regional crises as well as drawing the attention of powers external to the region.

Erdoğan spoke of how the current international maritime law is not useful when it comes to dealing with a very narrow sea such as the Mediterranean, and of how clauses regarding the procedures and methods of delimitation can actually cause more harm than good. Explaining the position of the Turkish government in the matter, the panelist underlined the fact that Turkey supports the idea of using the mainland as guidelines for the delimitation, whereas Greece takes into account the presence of islands. Erdoğan also noted the many faults within the idea of utilizing islands as platforms from which to extend maritime borders.

In the conclusion the panelist stressed that the current crisis is a reflection of not only competition over gas resources but also of political tensions, highlighting the fact that Turkey has diverged from Western interests, has engaged Russia over a certain number of areas and that Turkish policies pursued different interests compared to those of regional countries and therefore clashed with regional and extra-regional powers.

The Eastern Mediterranean region is experiencing several dramatic changes following the events of the Arab Spring and the discovery of natural resources in its area. These tensions have politicized and exacerbated pre-existing issues, like the maritime boundary disputes and the Island of Cyprus question. In this regional picture, the rivalry and presence of great powers like the U.S. and Russia have added a new level of complexity to the scene, creating and exploiting several new regional alignments for their own ends.

We hope that the panel was fruitful and provided a better understanding of the issue at hand.

The full panel can be found on our YouTube channel.

The Broken Olive Branch: Nationalism, Ethnic Conflict and the Quest for Peace in Cyprus

Exportation of EastMed Gas Resources: Is it Possible without Turkey?