After the publication of its issue, Trump’s America, Insight Turkey organizes a panel in which four distinguished speakers will share perspectives on Trump’s policies and the impact on international politics. 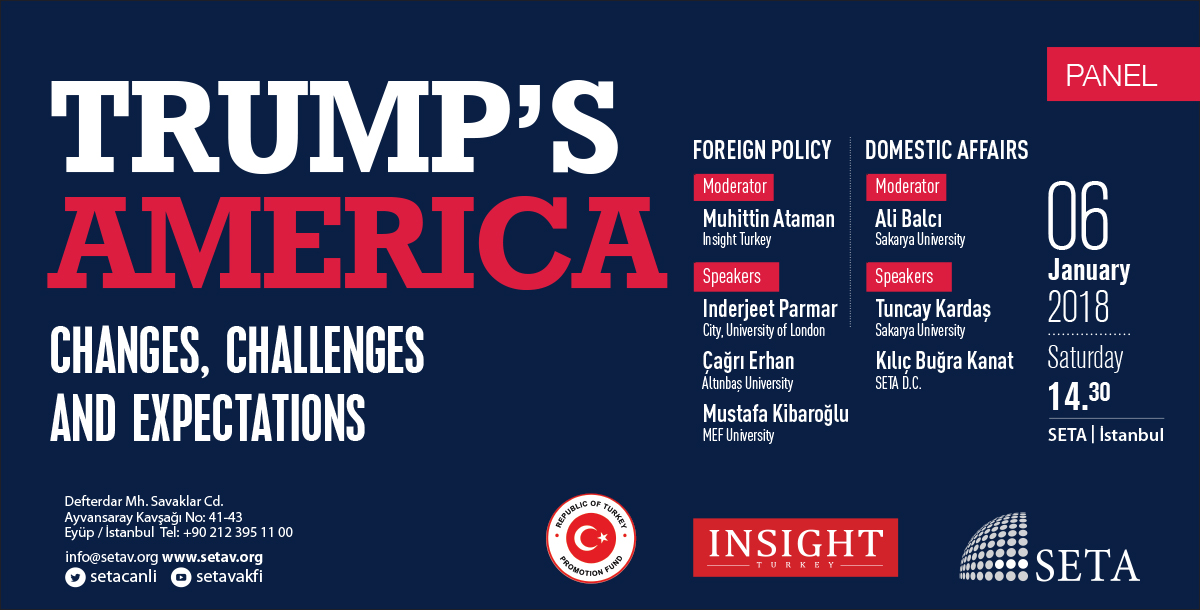 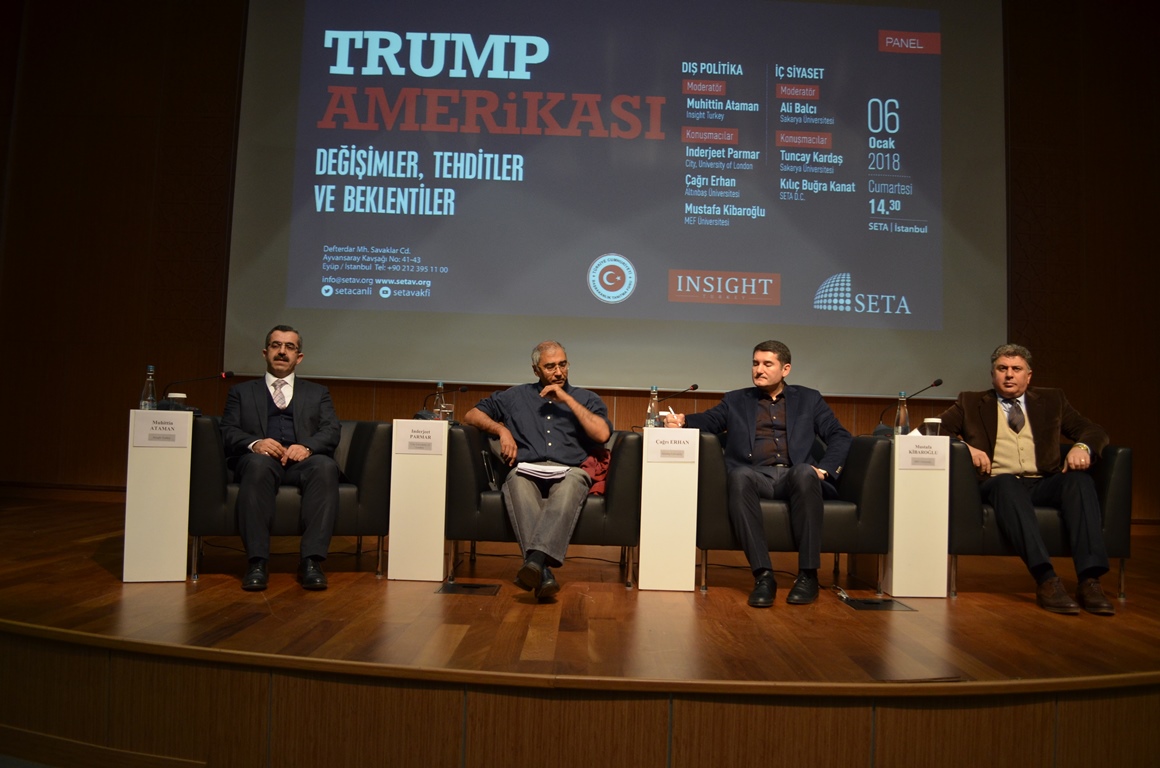 Inderjeet Parmar discussed the crisis of the liberal order and critiqued the ways in which Trump’s political strategies are deepening this problem. He addressed Trump’s politics, colloquially known as “Trumpism,” due to the fact that the politics he pursues are based on individuality and intended merely to increase the wealth of the elite. Differing from former President Obama’s discourse, Trump’s populist political rhetoric includes misogynist, racist and classist remarks. Despite Trump’s rehashed “Make America Great Again” campaign slogan and the election promises he has given, he hasn’t made any significant changes politically or economically. The Trump administration’s policies are based on ego and chaos. The policies are improvised and don’t indicate any significant strategy. The policies are policies are in opposition to long-standing efforts in the U.S. to ensure equal rights for all citizens regardless of gender, color, class, etc. The strategies the United States has adopted in the international arena are based on international interest and not domestic benefits. In this context, the U.S. should implement a national-interest-based strategy and pursue it in all fields.

Çağrı Erhan provided a brief summary of American-Turkish relations from a historical perspective. He emphasized that bilateral ties were at a high point in the 1940s, and improved further after Turkey joined NATO in 1952. Erhan discussed Trump’s first year in the Oval Office and explained the decline of relations that has taken place since his election in 2016. Erhan noted that throughout the time the U.S. has held a hegemonic stance, and has used it to carry out its foreign policies. In the recently published “American National Security Strategy,” however, the Trump administration did not put forth any strategies and instead turned the document into a rhetorical exercise by continuously repeating “America First.” Nowhere in the document is there any method that would keep U.S. hegemon alive. Trump has been unable to establish power internationally because of the problems he has faced and continues to face in domestic politics. Indeed, much evidence indicates that America’s foreign policy in the Middle East in the Trump era is being carried out by people Obama appointed; therefore there has not been a noteworthy shift. The U.S.’s relations with Turkey have declined since Trump came into office. Most notably, the visa crisis and Trump’s decision to move the U.S. Embassy in Israel from Tel Aviv to Jerusalem has soured the relationship between the two countries.

Overall there are five conflicts that need to be resolved:

Mustafa Kibaroğlu focused on U.S. security. He addressed the U.S.’s security branches in three parts: The U.S. Department of State, the Pentagon, and the DNI (Department of National Intelligence). He evaluated Trump’s foreign affairs and concluded that the Pentagon has a major influence in steering politics. All of the ambassadors appointed by Obama were asked by Trump to resign. Despite this fact, Trump is still having a difficult time forming a firm cabinet. Moreover, the method the Pentagon uses in foreign affairs is undiplomatic and based solely on military interests. Its strategies are maintained with a military perspective rather than a politician’s point of view. The Pentagon’s priority is fighting terror; from its perspective the weapons of mass destruction that Russia and China possess pose a threat to the United States. The Pentagon’s defense strategies have turned into the U.S.’s foreign policy strategy. The Pentagon is now responsible for managing both defense and foreign affairs. 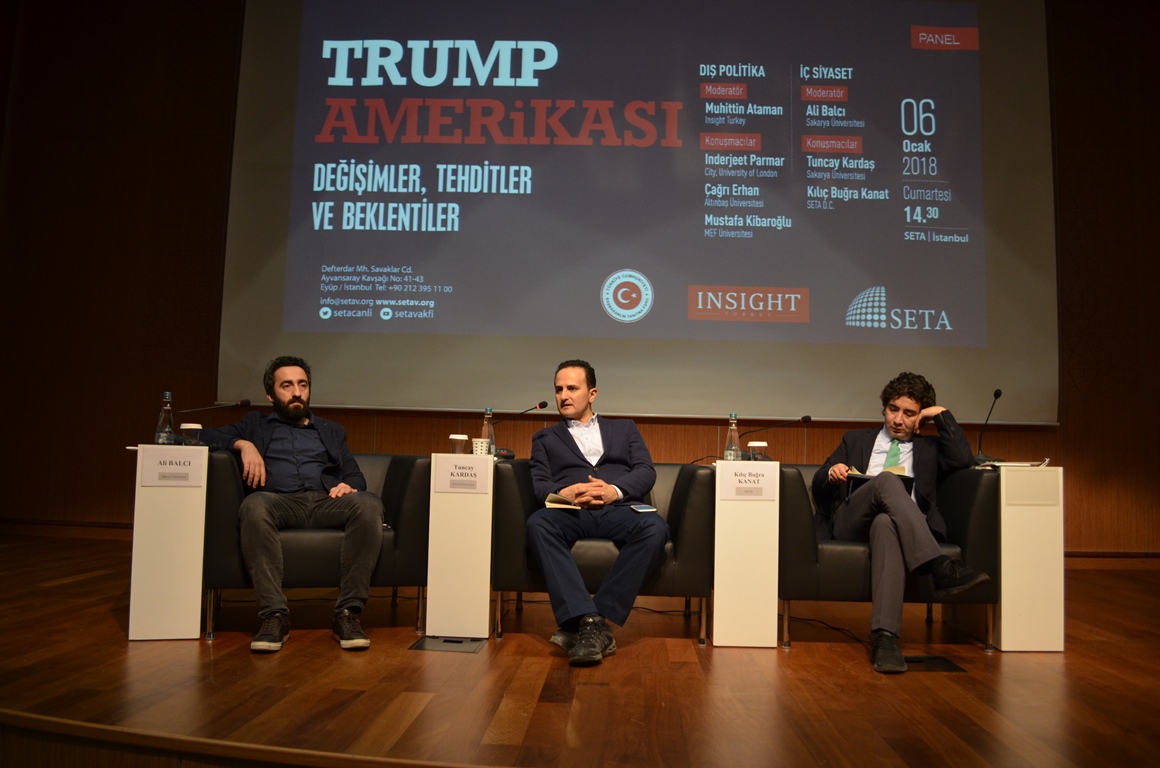 Tuncay Kardaş analyzed Trump’s domestic politics in terms of individual, cultural and structural factors. Kardaş assessed how Trump’s disposition has affected U.S. domestic policy. He noted that the individuality in Trump’s political stance has turned him into an important actor. While the Democratic Party stands for the interests of minorities and their organized interest groups, the Republican Party under Donald Trump stands for White America and excludes everybody except for White Americans and Judeo-Christians. Although the elections are over, the cultural war going on between the political parties still continues. The political discourse Trump uses in his rallies is not only political but puts forth cultural values as well. In terms of structure, a few years ago, the campaign monetary restrictions were removed by the U.S. Supreme Court allowing an immense amount of funding to go into the electoral campaigns, boosting the influence of the American elite. Given the power of the media complex industry, a limited number of actors can leverage events producing massive results. Social media and mainstream media alike possess the ability to influence the electorate, and the bureaucratic vacancies in various government departments could be filled with the help of the Koch Brothers network giving Trump assistance in forming a political discourse and slogan depending on the electorates’ behavior.

Kılıç Buğra Kanat focused on the radicalization of the middle class in the U.S. due to globalization and the bankruptcy of international companies. These factors have pushed them toward radicalization and the social alienation of the Washington elites. Kanat evaluated the elements that brought Trump to an electoral victory. The most significant element was the political power struggle between Trump and the Washington elite, and Steve Bannon was the symbolic name that first came to mind. Kanat concluded by saying that political tensions between Trump and traditional Republicans will determine the future process of Trump’s administration and that the decisions taken in foreign policy will affect Trump’s future.